Picture it, it’s a mild summer’s evening in the streets of Paris, you look out of your window on to a little French street and you see a mathematician, a painter and a Finnish girl holding a guitar meeting for the first time. As the sun sets, they wander off towards the heart of the city soon to become dreamy French trio, Oracle Sisters. This may not have been exactly how Oracle Sisters came to be, but we can dream. However, the general gist is true. After finding themselves in the French capital, Lewis Lazar, Christopher Willatt and Julia Johansen decided to adjust their lives and differing careers in order to pursue their passion for music. We caught up with Julia and Lewis about their ethereal sound, the buzzing French music scene and their newest single ‘I Don’t Wanna Move‘.

Although we had pieced together our own telling of how Oracle Sister’s came to be, the real story is much more enticing. Although the trio were initially in a reel of different career paths, it seems that fate had other ideas in mind.

J: ‘I was told by a Siberian medium that we shared 3 past lives together and in one of them we were a theatre group that didn’t quite make it… So in this lifetime we came together as Oracle Sisters and perhaps when we’re all retired musicians we’ll have another go at theatre.’

L: ‘All that is true, and in this lifetime..we were all doing our thing in different cities (Edinburgh, New York and Helsinki) but came together in Paris.’

Growing up as friends Lewis and Christopher were able to share their love of music. And although they all followed different career paths initially, their love for music eventually reigned triumphant.

L: ‘Chris & I had been in the same school since we were 5 years old, and grew up side by side both doing our thing and writing music then got to know each other as teenagers where we worked on music together for a few years at the end of school. We then moved cities and a few years later reunited in Italy working in a haunted villa. We moved to Paris right after that.We all do different things of course, I’ve always painted since I was a kid and have integrated that in to the band by doing the art work and co-directing some of the videos. I still do exhibits and sell my work sometimes, but I paint because I love to paint and express myself that way too. It cleans my perspective of the world and refreshes it.  Chris was organising cabaret and vaudeville type stuff in Edinburgh, kind of a dancer too. Julia loves heavy metal and used to travel the world.‘

The past twelve months have been hard for everyone; whatever country or industry you’re in. For the creative industry, changes have lied in transitioning from live shows to live streams, and attempting to find inspiration in the ground-hog like days that have followed lockdown announcements. While there have been a lot of negatives, Julia and Lewis also spoke to us about some of the positives they have taken from this strange year.

J: ‘Obviously the confinements where we haven’t been able to meet and rehearse and cancelled gigs and closed venues etc… On the positive note there’s been a lot of time for recording, composing, writing and practicing.’

L: ‘The obstacles are pretty obvious and devastating, people getting together is the life blood of performance and music. I think we’ll take it less for granted collectively when we get back to it, however…the wonderful gift of this time has been to really focus on writing and recording, practising and all that which we’ve done a lot of.’

Although this doesn’t mean that Oracle Sisters have necessarily enjoyed moving to online performances, as Lewis descriptively sums up…

J: ‘It’s definitely strange to play in front of your phone with people watching from their side sending virtual claps. I’m sure artists as well as audiences appreciate being able to connect with music in whatever way is possible regarding the circumstances. Social media is evolving so fast and if you choose to stay out of it as an artist, it’s not always to your benefit. It’s a tool to be used wisely…‘ 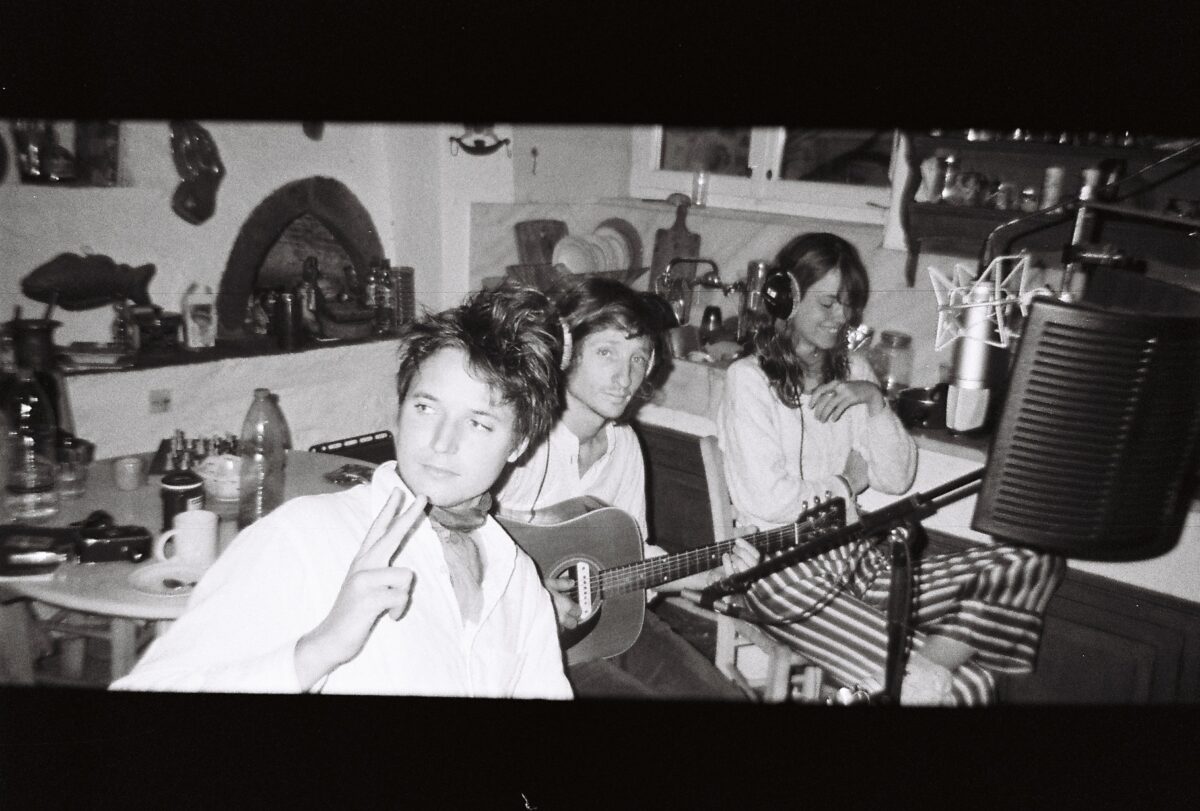 Although Europe has always been buzzing with different musicians and creatives, some musical artists have discovered obstacles when entering the mainstream music scene in terms of language barriers. However, the ever-growing French music scene is becoming more and more popular with music fans. Haste previously spoke to French artists Eylia and Lou Berry to get their perspectives on how the scene is expanding, and when we proposed the same question to Oracle Sisters we only became more excited about what’s to come.

J: ‘Paris is a hub of artists and musicians but it seems a lot of them stay in their cocoons creating and exploring their talents for long periods of time until the first rays of spring bring them out to the smoky streets and corner bars…‘

L: ‘The city is one of the wellsprings for musical artists in Europe..artists like Daft Punk, Air, Phoenix, Justice and more recently La Femme, Christine and the Queens,  Papooz, l’Imperatrice all come from a very DIY spirit, recording at home, developing their own sound, their own language and identity.

You’re forced to do that because there’s not a lot of space to spread out, it’s a very compact museum. You have to become a mad scientist in your little music cave that you carve out for yourself. Parisian artists come with their own spirit of DIY tinged with a weird sonic perfectionism and sort of musical adventurism, the limitations of space maybe force people inwards to become experimental. The city has all kinds of clashing criss crossing cultures. It’s a mecca of sorts of old and new.  it will always throw up something..somehow, you never know what though, but then it may have to do with meridians. You never know. You can’t predict where lightning will strike again.’

Taken from their upcoming album ‘Paris II‘, Oracle Sisters recently released their single ‘I Don’t Wanna Move’. The newly released single takes on a more emotional route than their past music. Lewis explained to us how and why they have chosen to switch up their sound slightly in their up coming album.

L: ‘We wanted to do something more down to earth than Paris I.  More personal and a little more loose. They were songs that we had around over the last year, one we found on a toy piano, one in a farm barnyard, one was written in Edinburgh, one in a small apartment in Montmartre to an orchestra of pigeons.’ 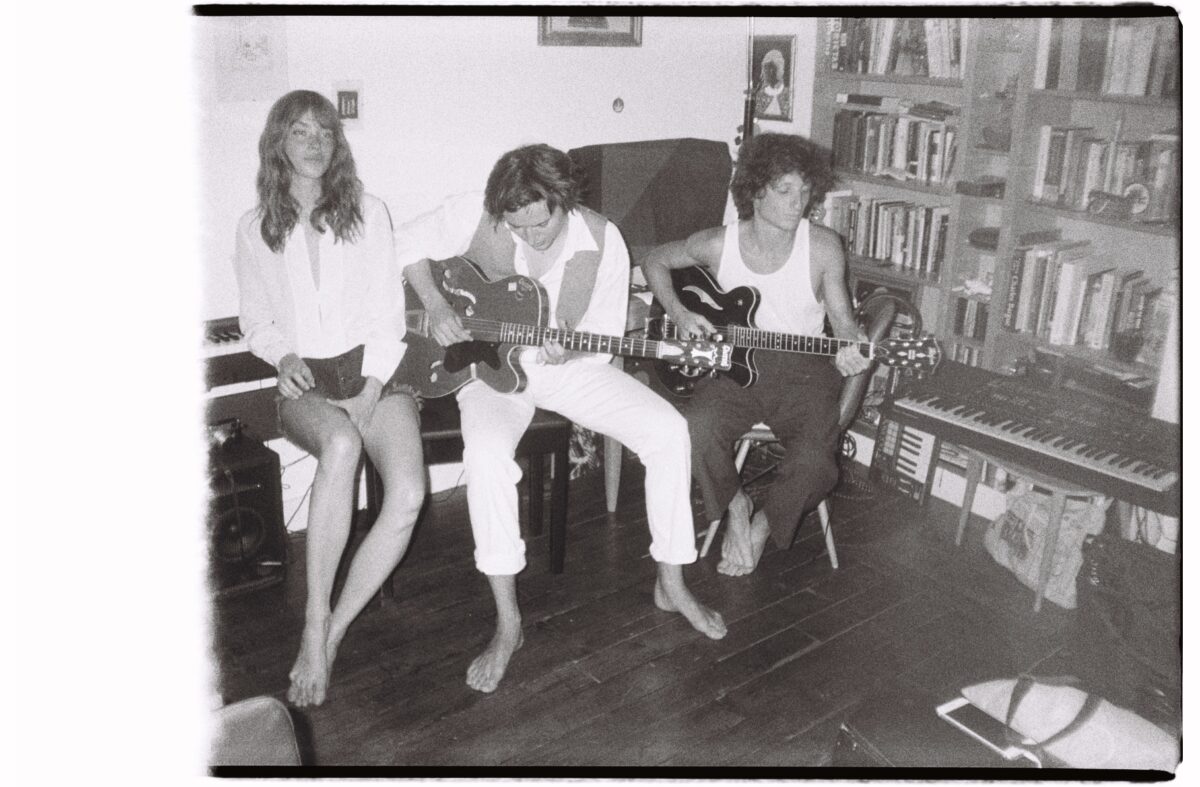 L: ‘A song appears to you like a waking dream at best. It just kind of shows its face, like an image you can see, you can hear and feel, and you have to sort of respect it in one way or another.. not scare it away but not try to possess it, you just sit down with it and work with it til it’s done. If you don’t, it travels on to someone else maybe. There are thousands of songs floating around the air that are waiting to be written.’

Although live music events are still hanging in the balance, we have a lot of exciting new music to look forward to, even if we can only listen through our headphones for now. And Lewis left us with a lot to look forward to from this talented trio.

L: ‘We have Paris II out April 7th, another live EP we did with a quartet and then an album by the end of the year, maybe two. We recorded in November 2020 in Greece on the island of Hydra around 30 songs and we’re trying to get something together out of those, so far so good. We’ll play shows when we can, kind of feels like Pandora’s box ain’t shut yet.’
Head over Oracle Sister’s Spotify page to listen to more of their ethereal tunes including new track ‘I Don’t Wanna Move‘, and keep an eye out for their next album ‘Paris II’ which will be released later this year.
Sophie Wyatt2021-03-04T17:36:15+00:00