Diving head first into the creative industry as animator turned singer-songwriter, George Moir has a lot of talents up his sleeve. His fun upbeat tracks aligned with truthful lyrics about the confusion of moving through young adulthood have gained him a loyal following of fans. We got to chat to the thriving artist about his process behind his ‘organic-wholegrain tracks’, and encompassing his animation skills in his colourful, escapist music videos. 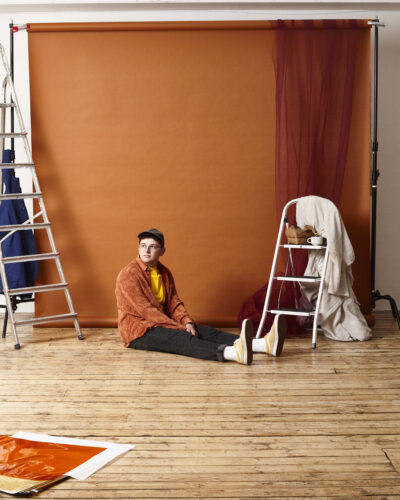 After hearing George’s vibrant tunes, it’s no surprise that growing up he was introduced to equally vibrant artists. He explained to us that his first memories of music included a lot of Ragtime jazz and playing the piano a little too loud for his parents liking.

‘I remember my family bought a piano when I was very young. I don’t remember the day they got it, but I remember going to a piano shop and getting to have a little play on them all. And I remember thinking ‘Oh my God this is amazing’, I must’ve been two or three or something. So my parents ended up getting one and I used to just play it all the time and they had to ration how much I could use the sustain pedal, because it would just make it way too loud and they’d be like ‘OK that’s enough piano for today‘, he laughed.

I was really into The Andrews Sisters, well my mum was really into The Andrews Sisters and I loved it. But there was just a whole mix of music being played in the house as a kid. Like The Andrews Sisters, Nina Simone, Nat King Cole and I think there was some Fats Waller as well. So just really old school stuff, old old stuff like Ragtime jazz going back really far. So that was the musical environment I was brought up in. Then the first artist I ever got into I was probably like thirteen and I heard this James Blake track and I was like ‘oh my goodness this is great’. And then the journey began there.‘

Growing up with such a vast amount of music around him and access to instruments, it was only natural that George fell in love with music and began to crate his own. And although it was always an aspiration, George told us that he only ever saw it as a childhood dream, rather than the reality that has become.

‘I mean I never thought pop star was a legitimate career aspiration to have‘, he laughed. ‘It’s kind of the 10-year-old kid dream job isn’t it? And I mean it was my dream job as a kid, but I kind of sobered up and thought probably best to have a slightly more real job. I don’t know if animator counts as a real job anyway actually. I’d just been doing it as a hobby for years and years, probably like ten years just writing, recording stuff and putting it out on my own. And then probably like three years ago now it kind of broke into the music industry sphere, and I got a load of emails from really cool people saying they liked my music. So it’s just been an adventure from there, taken a few scary leaps of faith and had to deal with not having very much money for some time.‘

Although George has been writing, singing and producing his own music for several years, before pursuing his passion for music he worked as an animator. As well as writing and recording his own tunes, George has also been the creator behind his music videos. He gave us an insight into the process behind his collaged creations.

‘Yeah I make all of my own videos, because of the animation thing it just makes sense. I really enjoy having a kind of ridiculous amount of creative control over it, especially with the collage thing and creating a world that doesn’t exist. I try and make it look like I have actually done it with paper, but the actual process is a lot more nerdy-digital-land where I just go into the Adobe Suite and hide for two weeks straight and come out with a video at the end of it.‘

Whilst George has been creating tracks for some years now, he has only been releasing music commercially for the past twelve months. With live shows out of the question, it has meant that musicians have had to turn to social media and streaming sites in order to allow people to hear new work, and also stay connected to fans. Being an emerging artist George explained that it has been a confusing year, much like his tunes he kept his answer considerably upbeat.

‘Yeah I mean it has been a mental year. I don’t really know what an emerging business year normally looks like for any other year. It’s been quite comfortable in a sense because I haven’t really been pushed out my comfort zone because I’m still just in my bedroom, making music and putting it out on the internet. And it does suit me quite well because I do the animation and it’s a very kind of other worldly thing. It’s nice to be putting stuff out that’s quite escapist, like you can step into another world. It’s really challenging, but it’s been really fun giving it a go and just putting stuff out there. It’s been lovely seeing people still connecting with it even without the sort of material-live stuff along side it.‘

Growing up with such vast library of musical classics, George has been able to use his influences and own style to refine his instantly recognisable sound. His music, that is guaranteed to put a spring in your step, is full of upbeat tunes that give a vibe of summer nostalgia. However, George parallels this with lyrics that every young adult attempting to map out life can relate to. So we asked George how he would define his music.

‘I guess the way I would like it to be summed up is organic, wholegrain… You know those Graze boxes? The musical alternative to that, like a nice little packet of good healthy food delivered to your door.‘

One of George’s EP’s released over 2020 also featured one of Haste’s past interviewee’s, Blossom Caldarone. Also an artist that takes her fans on a journey of truthful lyrics set against upbeat musical tracks, it’s not surprising that Blossom and George’s musical talents intertwined perfectly with each other for their single ‘Lonely‘. George explained to us how this single came about, and gave us a bit more insight into how their friendship ignited over Zoom (very 2020). 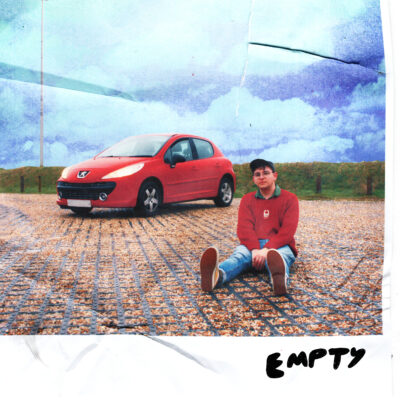 ‘It was lovely to work with Blossom. I still haven’t even met her in person, but a mutual friend of ours introduced us over email. And Blossom very kindly did a little feature on her Dancing Diana blog, last year over the summer and after that we jumped on a Zoom call. Kind of exactly like this, I was sitting in this very spot. And yeah, we spent an afternoon writing the song, I came up with some chords and we traded some ideas and lyrical themes. It materialised very quickly , I hadn’t done a lot of Zoom writing sessions at that point so it was really nice because it just felt super smooth and we were on the same page the whole way. We had a finished song within a few hours, which was absolutely bonkers that barely ever happens.‘

While the future is still almost impossible to plan for, especially in the creative industry, George has high hopes for 2021. He gave us some intriguing details of what is set to come over the next twelve months.

‘I’m not entirely sure of the details, there’s a date that I’m holding off on to release a load of information. I think I can say hopefully, if all goes well that there’s two projects going out this year. So lots of new music this year, it’s going to be a good year.‘

Head over to George’s Spotify to hear more of his funky tunes including his brand new track ‘Empty‘. And don’t forget to check out his Instagram page for musical updates!