A master of tempo and a inspiration to young female jazz artists everywhere, Jas Kayser certainly plays to the beat of her own drum. After picking up the drums from a young age, Jas has gone on to play with some incredible names in music. From Jorja Smith to Alfa Mist to Poppy Ajudha. Last year also saw the young drummer release her own three track project, ‘Unforced Rhythm of Grace‘. We caught up with Jas to discuss her journey, the gender imbalance in the world of jazz and what she has planned for the future. 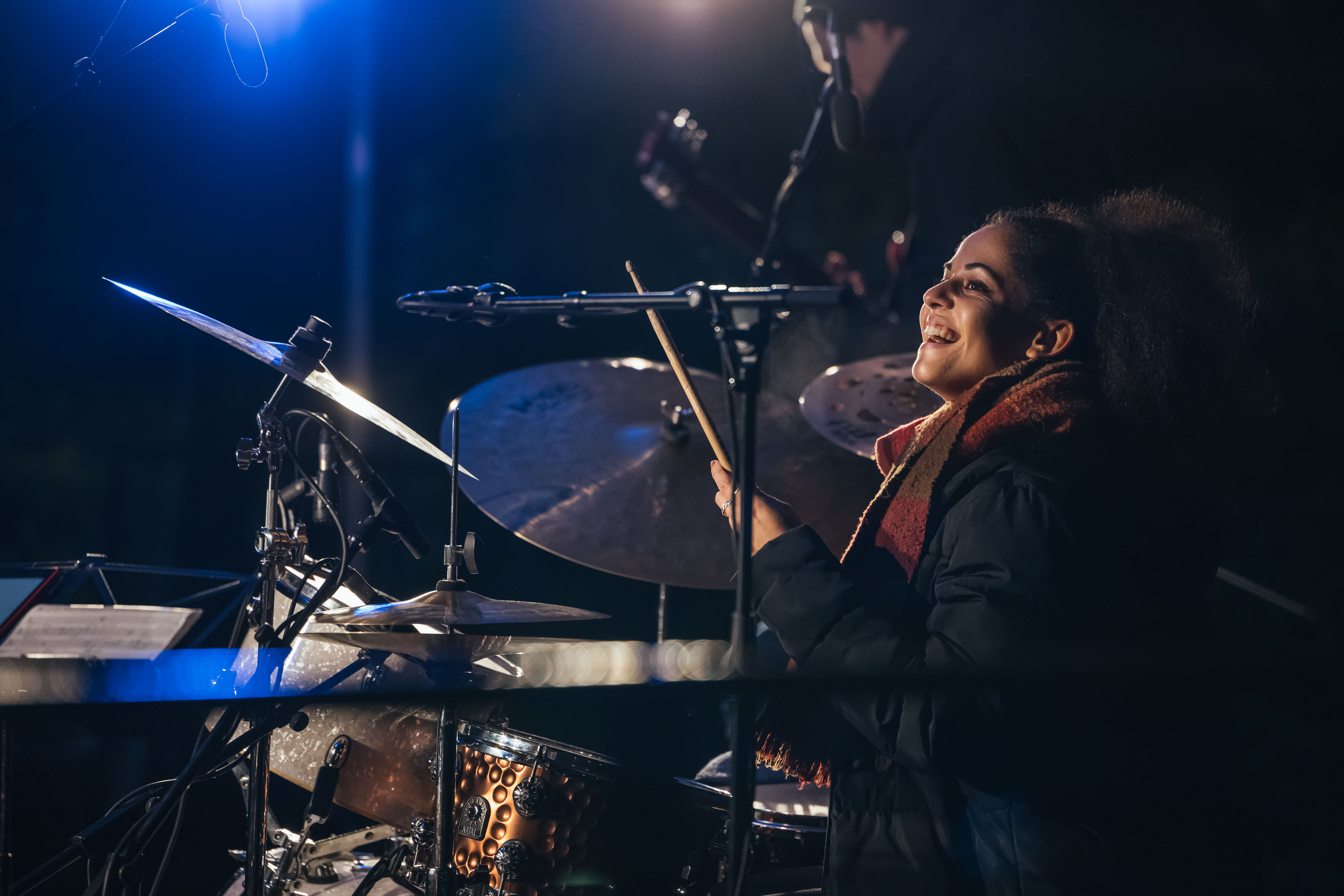 Jas Kayser never misses a beat. Her drumming is second to none, and at such a young age she continues to amaze fans and fellow musicians. She explained to us that her love for drumming came almost immediately as she started school. And from there her passion has only grown alongside her talent.

‘One of the first memories I have is when I was at primary school, I wasn’t learning music at this point but a guy came in to do a drum circle workshop. I think we were year 3 or 4, and I remember just loving that. Then they gave us music lessons when I was around 9, so I took up drums and then I had to play in an assembly. For some reason I was dressed as a clown. But it was such a memorable moment because it was the first time I performed in front of anybody. I remember getting butterflies and I asked my teacher what that feeling was and he said it’s excitement.

Apparently I was quite adamant that I wanted to play the drums. I had lots of support at school and from my teachers. I’ve had a really lucky upbringing, I’ve never known anyone think it’s not a valuable career. I’ve always been pushed to pursue it. I was more into sport at first, but music ended up taking over.‘

Earlier this year we spoke to the two women behind the growing platform Women In Jazz. Second cousins Louise Paley and Nina Fine set up WIJ after working in the industry and seeing the clear gender imbalance first hand. Since then they have been encouraging young women to enter the jazz scene and helping those already in it to take the next steps in their career. Jas is one of the artists the platform have helped and continue to work with. We asked her how this came about.

‘I was away in Boston and then I came back to London to play with friends to get involved in the scene and see what was going on. They were doing their Soho Radio show and they were featuring loads of up and coming female jazz musicians. It was really cool and nerve racking because it was the first time I’d gone into a radio station and done a show. Since then they’ve been so supportive and gotten me a lot of gigs. One of the last shows I did before lockdown was one of their showcases. They’re legends Lou and Nina.‘

Only 5% of the jazz music scene is made up of female artists and musicians. Yes you read that right. The statistics are shocking, and platforms like WIJ and artists like Jas are working to correct this, and to make the jazz scene a more inclusive space. Jas spoke more on her experience as a woman in a predominantly male industry.

‘I talk about it quite a lot now, I never really did when I was young because it didn’t seem relevant at the time. I had so much support. But now I realise it’s an issue. I like teaching a lot, I teach at a few different academies and quite a few of them are female drummers and they seem so grateful. I can see the way they look up to me, maybe more than a male drummer just because they see more of themselves and they can relate. And it’s so impactful to have a role model to look up to. Also I’ve been doing gigs with Poppy [Ajudha] and it’s always girls that come up to me afterwards and say how much they loved it. They’ll say ‘Oh I’m an accountant but I gave up music when I was younger’, which is so sad to hear that not everyone gets the support that they need.‘

As 2021 draws to an end, we are even more excited to see what our favourite artists have for us in 2022. And Jas has plenty up her sleeve. While she continues on tour with Alfa Mist, she explained that she has a lot for us to look out for in the months to come.

‘I’m releasing my album which is really cool, that’s going to come out the first week of March. We’re planning to go South By South West in Texas, which is huge. And then I’m touring with Alfa Mist from January to February and then I’ve got a bunch of stuff with Jorja Smith too from April.‘

While we wait on the edge of our seats for Jas’ upcoming album, head over to her Spotify page to listen to hear most recent work.