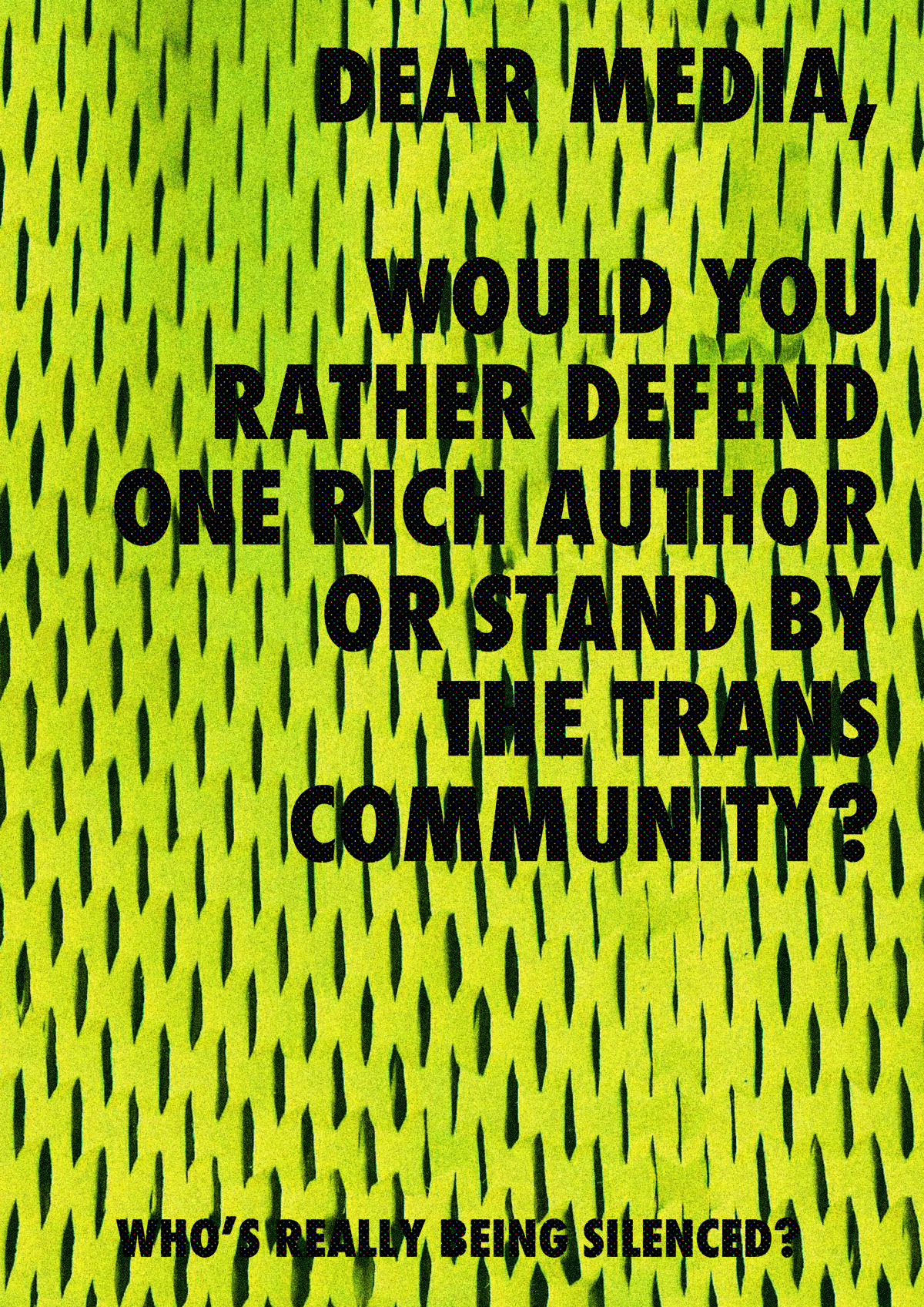 In honour of LGBTQ+ history month, the Tate Collective commissioned five artists to respond to works within the gallery’s collection. Inspired by Guerilla Girls, Shane Simpson (@shane_pdf) created a response not only to the pieces that resonated with him, but also to address the rampant transphobia in the UK perpetuated by the media. The 25 fly posters, hand bound by Shane, use a number of different questions and phrases in order to address the issue of trans voices being silenced within the media, hence the title ‘Who’s Really Being Silenced?’. We got the chance to chat to Shane following the release of the book, on being a trans artist and using art to continue the fight for Trans liberation.

After doing an illustration degree, Shane realised about halfway through that they didn’t actually enjoy drawing at all. However, Shane did start to create zines ‘as an excuse not to draw anything‘. While his art is eye-catching and vibrant, it is clear that the message of the art lies beneath the words. This artistic concept was mirrored by Shane’s response when asked what art means to them.

‘I think art mostly is just an excuse to be a bit loud. Most of the work I make is really just a conversation I’ve had at the pub but dressed up as a ‘piece’. People listen to me that way! I also really like the idea of making ‘bad art’. I don’t think art has to be good or meaningful, or even be shown to anyone. I actually much prefer ‘bad art’ sometimes.’
As per the Tate Collective’s invitation to creatives, Shane chose to respond to a piece or collection already within the Tate. And so Shane chose to create his fly poster collection in response to the Guerilla Girls. Feminist, activist artists Guerilla Girls use their artwork to ‘expose gender and ethnic bias as well as corruption in politics, art, film, and pop culture’ through their outrageous and humorous visuals. They keep their identity hidden with the use of fancy-dress-esque gorilla masks in order to keep the focus on their work. Much like Shane’s work, the Guerilla Girls use bold fonts and brief statements, which leaves the viewer to stew over what they’ve just read. We asked Shane when they first came across Guerilla Girls’ works and why they chose them to respond to.
‘I feel like I remember seeing their work for the first time in a GCSE art lesson. Every queer kid at school who has made work about being queer surely has been shown the Guerrilla Girls’ work as an example for their artist research. It’s the art teacher’s way of saying, “Ahh, you’re a political one.” I was actually quite pleased to come across it again in the Tate’s collection. While their work doesn’t focus on queer and trans issues, it had the punch I needed to say what I wanted to for LGBTQ+ History Month.’

Do Women Have To Be Naked To Get Into the Met. Museum? 1989 Guerrilla Girls

‘Who’s Really Being Silenced?’ not only contains a number of bold, statistic truths, but the name of the collection itself speaks volumes. While the equality, autonomy and healthcare are still just some of the issues Trans people are fighting for, it is becoming increasingly apparent that the voice of Trans people, the voices we need to hear right now, are not being publicised. Shane explained a bit more about the reasoning behind the name of the collection.
‘The title was the last bit I wrote. I needed a slogan at the bottom of every poster to kind of tie them all together, and that seemed to fit nicely. It’s a response to the idea that when someone has ‘controversial’ (bigotted) views that they’re going to be silenced, when in reality they get put on Question Time or get a column in a major newspaper. Or a big book deal.’
One of the fly posters in Shane’s collection reads; ‘Articles in a UK newspaper in 2020 written about trans people by trans people: 0 cis people: 324‘. Statistics like this only prove further how much the British media are consciously excluding positive, trans told narratives. While transphobia is still rife within the UK, some well known media outlets continue to stand by people in the public eye, whether they come out with completely transphobic comments or not. In the fight for equality and the elevation of Trans voices, it is perceived by some that the Trans community will ‘take things from other people (cis, straight people)‘. So in our next question to Shane (and one that we continue to ask ourselves) we asked why they think that this warped understanding is still rife around the country. 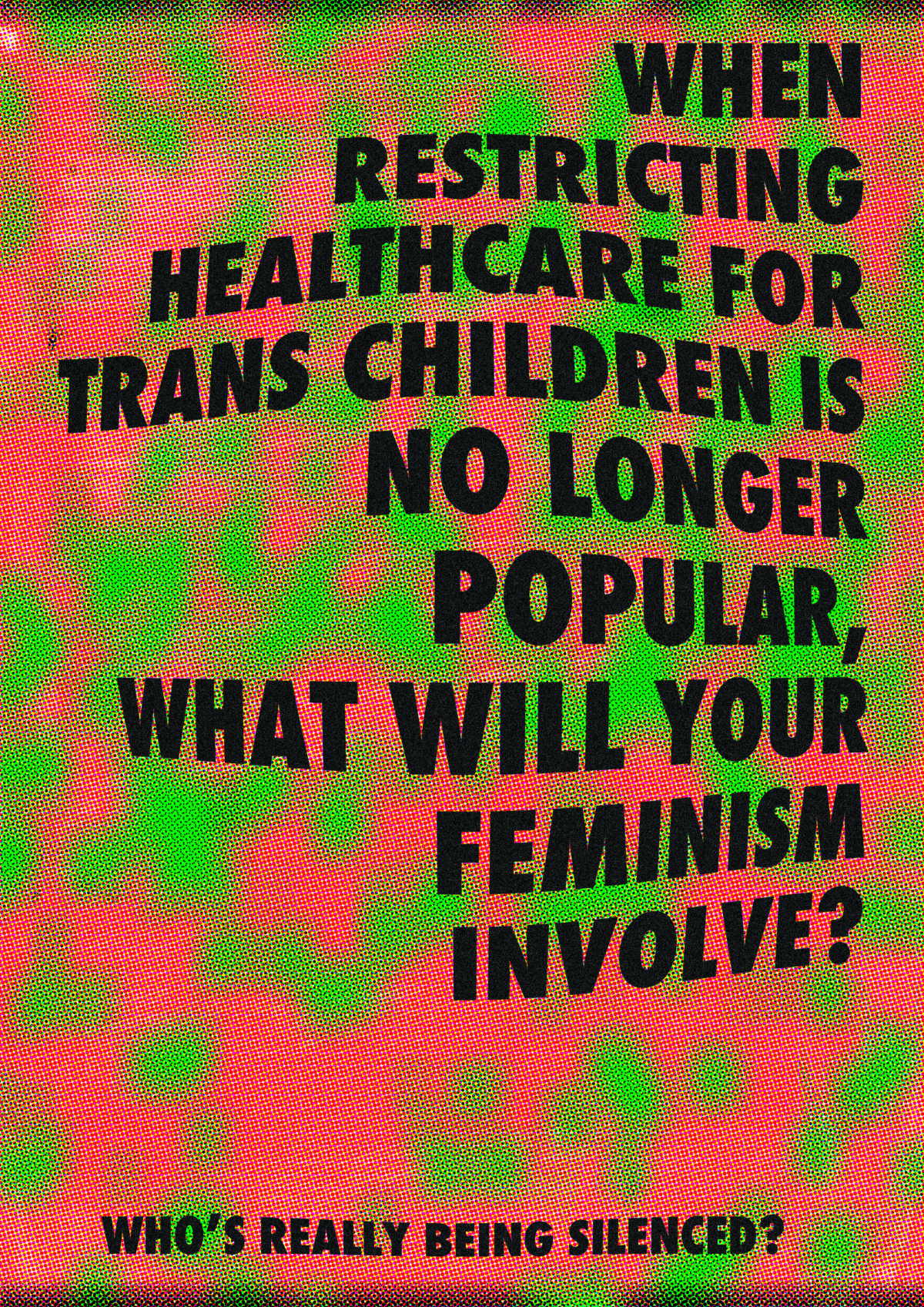 ‘In almost every conversation had about transness on the TV, the radio, in the papers, etc, there’s always someone saying, “Well what about women’s rights? What about children? What about lesbians?” as if us simply existing as trans people is removing them off the face of the planet. When trans people aren’t the ones being heard you get cis people shifting the narrative to something that’s often so far removed from what trans people actually want. We don’t sit around demanding everyone use the phrase ‘pregnant people’ or ‘menstruators’ instead of ‘women’. Sure, it would be nice to not have cisnormative language in the doctors office but I’m far more concerned about the lack of access to healthcare, or the possibility of a hate crime. Trans children for example have had their healthcare access restricted. The waiting lists are so long already, and lifesaving treatment is on the line. The more the conversation around trans liberation is centred around and lead by ‘gender criticals’ or trans exclusionary feminists, the longer it will take to actually reach any kind of freedom.’
While Shane’s work is helping to pave the way for more accessible Trans narratives, the internet is not without it’s trolls and transphobes. However, Shane explained that people from their past have got in contact and asked to share their work to younger audiences, to help spread awareness of not only the art, but the content.
‘It’s been really positive. A teacher reached out and asked me if it was okay for her to show the work to her class, and some students from my old uni have asked to do the same too. I was worried at first, because a piece I did a few years back about access to hormone blockers for trans children got so much negative feedback that I had to private my social media accounts and step back from the internet for a couple of days. It gained some attention on Twitter, which is essentially a breeding ground for transphobes. You can spot them from a mile off, and they don’t hold back either. It’s no surprise to me that Munroe Bergdorf recently deleted her account.’
While creatives such as Shane are helping to pave the way for the elevation of more Trans voices, there is still so so much that needs to be done. This is only the beginning. Finally we asked Shane what they think needs to change in order for Trans equality within the UK.
‘It’s a funny one to me because as much as we need to be listened to, a lot of us feel like we just want to be left alone! To have newspapers write about us weekly is bizarre when you consider that trans people make up an incredibly small percentage of the population. We don’t have very complex demands, we just want to live and be free. To be able to have healthcare and basic human rights just like everyone else. The moral panic surrounding our existence is so draining.’
Sophie Wyatt2021-02-24T07:43:02+00:00