Untitled (Nine Tables) 1998: Challenging the solidity of concrete from a feminist perspective

Rachel Whiteread’s work inhabits both sculpture and architecture. Untitled (9 Tables) is a cast of the empty space underneath a table, replicated nine times and placed in rows of three. To construct her piece, Whiteread built walls around the outer edges of the table legs in order to define the space of the cast. She then placed a polystyrene core in that space in order to reduce the weight of the piece and then poured concrete around this to create the final shape. Each cast is identical.

The shape that Whiteread produced is complex. The legs of the table itself curve inwards at the tabletop and the cast carries this shape, tapering in towards the upper corners of the sculpture, with deep grooves marking where the legs join the body. Grooves crisscross the top of each piece, marking the underside of the physical table. There is a tiny indent around the base of each piece which gives the impression that the concrete sculptures are levitating, floating almost. The sculpture was part of the exhibition: Rachel Whiteread: Transient Spaces. 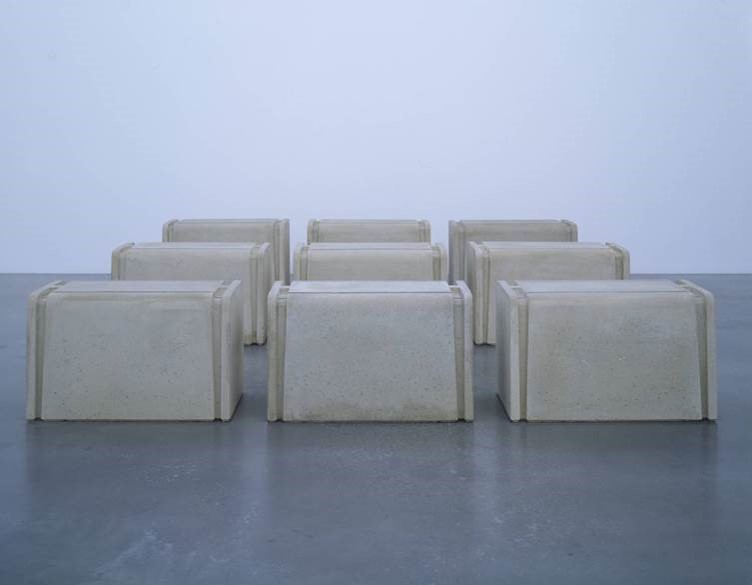 It is easy to observe this sculptural form as a whole, as what it is not: it retains the shape of the table that does not exist. However, to consider it in terms of what it is not, is to miss the point of Whiteread’s work. Untitled (Nine Tables), is about the unseen space beneath the table, the giving of form to that of which is ignored and that which is unthought of. Luce Irigaray’s work speaks to Whiteread’s practice, in her theory that women inhabit multiple subject positions, both socially and physically, and that ‘a woman cannot be reduced to any one single form, idea or subject.’ (Rawes, 2007). Perhaps this is why Whiteread has cast multiple tables: to express the plurality of females.

By articulating the empty space beneath a table, Whiteread’s work gives voice to the voiceless, and presence to the negative space, giving it shape and meaning in a world where it has previously been ignored or dismissed. Perhaps Irigaray’s contention that the female voice has been sublimated, speaks to Whiteread’s sculpture. Irigaray’s argument that a woman is multiple is interesting in relation to the number of casts that Whiteread has made of the same space in Untitled (Nine Tables). Each cast could signify a different female subject position, as ‘women are plural because they exist simultaneously in different subject positions’ (Rawes, 2007). This means that a woman can be a professional, daughter, architect, and mother – all is potential to her – all at the same time, without compromising each subjectivity. This for Irigaray is one of the complexities of the female experience, and her perspective can be used to illuminate Whiteread’s work: and Whiteread’s work to illuminate Irigaray’s, perhaps. Whiteread’s sculpture, made up of nine forms, could also relate to the time taken for pregnancy and gestation, and her sculpture in total is a “new life” for her creativity.

In considering Whiteread’s work through the lens of Irigaray, it is interesting to consider the material that Whiteread is using: concrete. Whiteread’s use of this material could be read as deeply ironic because concrete has such solidity and dominance. It is so rough and physically present. To use it in a sculpture that is articulating absence and forgotten space from the female perspective could be read as an implicit critique of the ‘single subject’, the dominant male paradigm that has shaped conceptions of identity in Western culture (Rawes, 2007).

Le Corbusier’s conception of The Modular, articulates this sense of a dominant male paradigm, as he created what he considered the “perfect” proportions, ‘a harmonic measure of the human scale, universally applicable to architecture and mechanics.’ (Le Corbusier , 1954). However, Le Corbusier’s “golden ratio” is imagined in terms of the male body and the male experience and does not go any way towards articulating the multiplicity of the female self. Rawes highlights Irigaray’s critique of how language and measurement are conceptualised in ‘finite rational terms’ in western cultures (Rawes, 2007). Irigaray argues that this minimises the female experience. Concrete was the material most loved by the architects and sculptors that followed Le Corbusier’s Brutalist ethos, because of its sheer materiality and functionality, ‘They are very muscular, and everything is perhaps bigger than it needs to be’ (Times, unknown) with no concession to elegance and beauty. This focus of functionality and size is very masculine. In using concrete Whiteread is reclaiming and refiguring that material, to speak to the female experience. 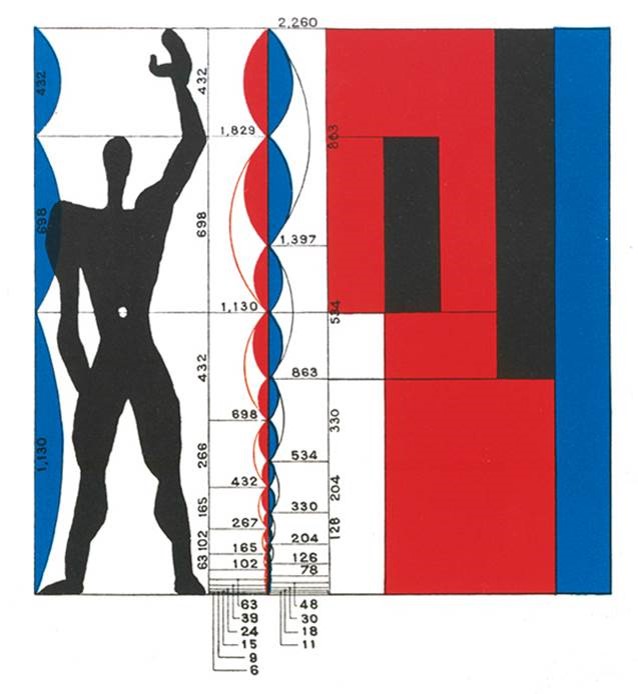 In harnessing concrete, Whiteread is reclaiming the material to express a different experience, one that relates to that of the female. In articulating the negative space under a table, Whiteread gives that space a structure that is not linear and perfect, but complex and imperfect and, in this way articulates the female experience as seen by Irigaray. This negative space could be seen as the space inside a woman: the womb. This space is hidden until a child is present, at which point that space is “filled” and becomes full of life. Whiteread’s sculpture could equally be a statement about female creativity; and the imperfection of these casts shows the complexity of female experience and the scars that women bear as a result of having the implicitly male “golden rule” inflicted on them in all aspects of their lives.

Jennifer Bloomer’s work also presents a critique of how architecture prioritises order and rationality, imposing a sense of control and precision. For Bloomer, this does not speak to the female experience of being multiple, as Irigaray might put it. That is, the entire landscape of architecture is seen and built through the male gaze and the female is expected to live within this space, solely designed around and for the masculine. For Bloomer, creativity needs to be re-gendered, incorporating ‘irrational and subversive elements in written texts’ to speak for women (Rendell, 2018). Bloomer’s own work projects the messiness and multiplicity of the female experience, that Irigaray herself articulated.

The domestic sphere has traditionally been seen as a female space, a space where the workings of personal, family life unfold, where the woman assumes the position of nurturer. This is in contrast to the ‘male’ spaces of public life, where business is conducted, where money is made, where activity is conspicuous. The kitchen is private, unobserved, and, as such, overlooked in the sense that it is seen in distinction with, not contributing to, the world outside. In this sense a woman is ‘passive, desiring, physical, irrelevant or forgotten’ (Rawes, 2007). The kitchen is, in fact, the sole interior space that has not traditionally been designed in relation to the ‘golden rule’. The kitchen is conventionally designed to female proportions and in this, is ‘othered’, marginalised, ignored (Frederick, 1913). However, to impose the sense of standardisation for the female experience is however problematic, in the eyes of Irigaray: for her the concept of the women resists standardisation at its very core. Further, in standardising female proportions this imposes expectations about the desirability of body types, a particularly contested site for women’s self-identity. Whiteread’s sculptures speak to all of this, showing the space that has been ignored, giving form to the formless, reclaiming the table — kitchen, office, restaurant — for the female experience.

Whiteread herself has said she perceives her casts becoming bodies, the negative space transformed into a representation of female experience – equally reclamation and testimony. When speaking about her cast Untitled (Air Bed II), she stated that the black piece of rubber cast from the underside of a bed was ‘this lip, like a clitoris’ (Whiteread, Houser, & Guggenheim, Rachel Whiteread: Transient spaces, 2001). This unearthing of the female organ can be interpreted as a profoundly social and political act. The reclamation of that space could be seen as a particularly feminist act as well, along with the use of concrete, a material that might be seen as archetypally ‘masculine’ in its brute presence. This reference to the female body is equally present in Whiteread’s Untitled (Nine tables), in the curves that the sculpture holds. The legs of the table curve inwards at the top in Whiteread’s cast and the upper corners taper in, waist like, perhaps sketching the curves of the female body. This feminisation of such a masculine material as concrete in the sculpture, could be seen in relation to the pernicious image of a “perfect” body type that has been imposed on women through time, and might therefore be a critique of that position.

In the multiplicity of her casts, Whiteread perhaps moves towards an articulation of Irigaray’s conception of female multiplicity. With this idea of the “perfect” body, it could be seen to be literally objectifying the female’s “curves”. Through the lens of Irigaray there is a clear idea of discrete fixed systems of thinking in relation to objectification. ‘Irigaray’s rejection of objectifying systems of expression and double-thinking therefore underpins her promotion of active sexed subjects’ (Rawes, 2007). This objectification puts the “female” sculpture under the gaze of the masculine subject fixing the women into this negative space.

Whiteread’s work, in particular Untitled (Nine Tables), challenges the solidity of concrete, using that material to reimagine its properties to possibly speak to female impulses and experiences. In using concrete to articulate that which did not previously have form, Whiteread challenges the properties conventionally associated with concrete, but also the mainly male discourse of dominance and strength. Whiteread’s work in general is profoundly political and feminist, that can be in part interpreted through Irigaray’s lens, particularly in relation to Irigaray’s ideas of irreducibility and multiplicity of the woman. That is not to say that Whiteread explicitly cites Irigaray as an influence, but that the two artists – one a critic, the other a sculptor, seem to speak to each other in interesting and enlightening ways about gender construction and identity.

Head over to The Tate’s website to read more about Rachel Whiteread’s ‘Untitled (Nine Tables) and more feminist architecture.

desk, A. n. (2019, May 09). Brutalist Architecure: What is Brutalism? . Retrieved from Architecture and Design: https://www.architectureanddesign.com.au/features/list/a-look-at-brutalist-architecture#:~:text=The%20genesis%20of%20the%20brutalist%20design%20movement%20can,designed%20several%20buildings%20across%20the%20world%20and%20

Times, F. (unknown). What is Brutalism? Retrieved from A guide to Brtualism: https://20bedfordway.com/news/guide-to-brutalist-architecture-london/