Everyone who has ever get on a train knows there is a whole world running on the tracks. Commuters resemble each other. Early in the morning, they all display the same bags under their eyes. In the evening, they all share the same desire: to rest, after a long day of work. Needless to say, nowadays all train passengers wear face masks. 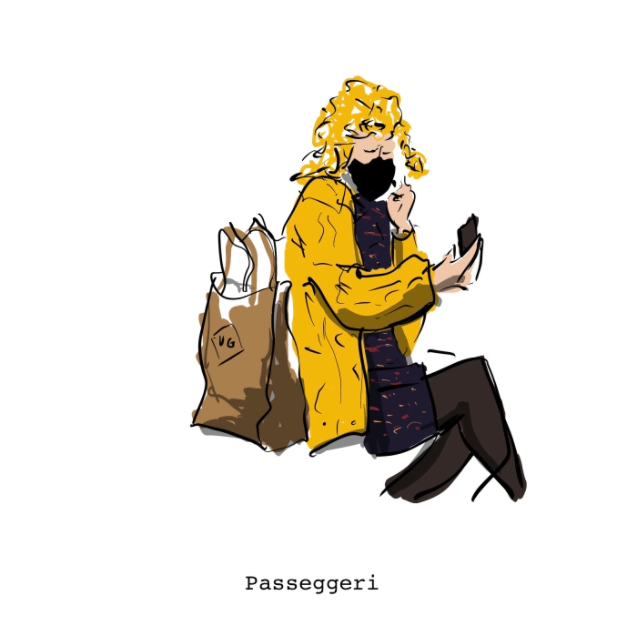 If you struggle to spot the differences between the thousands of exhausted expressions or the colourful face coverings, you may be glad to meet someone who is able to: the Italian artist Alberto Cavallari. Every morning, Cavallari gets on his train at a small station called Bovisio-Masciago, and gets off at Milan, the largest Northern Italy’s city. He works there as an architect.

In 2012, Cavallari began to sketch on a notebook some of the commuters he saw along his way to Milan. The first person he portrayed was is his wife Federica. She was travelling with him. Then, other people caught his attention, and small details stimulated his creativity. Curly blonde hair, outlandish coats, worn out books. For eight years, Alberto has been impressing passengers’ faces on his papers, without them even realising it.

‘It all started as pastime, a joke. I’m used to reading during my train rides, and I often see lots of people spending their time scrolling on their mobile phones. I tested myself with secretly drawing quick portraits. Well, I suddenly realised that I could relax. Most of the people were so lobotomised by their phone that they didn’t pay any attention to me.’

After some years, Alberto understood that what had started as a wacky art attack had lots of potential. He collected his notebooks, counted around 650 pictures, and shared them on a website and an Instagram page. Alberto gave the series the name ‘Passeggeri’, the Italian word for ‘Passengers’. This name is as simple as his drawings. Still, catchy in its simplicity. Observing passengers, Alberto has realised how people have changed over the years, and his project has become a sociological account of what he calls ‘an amazing bestiary’.

Like his passengers, Alberto has changed as well. He has remained faithful to his pen and his notebook, but he has also experienced digital drawing. Instead of using paper, he has begun to draw with an iPad, along with a stylus. This way of working has immediately revealed its pros and cons.

‘When I undertook my project, I gave myself some rules, because every self-respecting game must have some rules. The rule was “Don’t touch the drawings at home”. The drawings tend to be created and finished on the train. I use the pen, so I cannot cancel the traits. The only concession I make to myself is that I can water down slightly my portraits at home, ‘cause it’s hard doing it on the train. Switching from paper to a digital device allowed me to instantly add colour. But there are disadvantages. On the iPad, it’s easier to erase, sometimes I’m tempted to. That’s why I prefer notebooks’.

Alberto points out that he’s not looking for aesthetic perfection. He’s a self-educated artist, and his work is about speed, spontaneity, synthesis. I believe it’s also capturing the hard-to-find beauty of daily life. I asked him which his is favourite ‘creature’. He nodded, then got to thinking. After few seconds, he told me about a guy wearing a sweatshirt with an inspiring sign on it: ‘Fake is the new real’. When he opened his Instagram page, Alberto uploaded the guy’s portrait.

Time passed but, as luck would have it, the depicted boy got on Alberto’s train again. Alberto showed him his drawing on Instagram. You can imagine what happened. The guy fell in love with his representation and picked it as his profile picture. Arts, sometimes, pave the way for meetings. Since the beginning of January, Alberto has been trying an experiment. He would like to make ‘Passeggeri’ more interactive and engage people.

‘I bought a diary that has sheets that you can tear off. Sheets are made by carbon paper, just like the receipt books. This kind of paper allows me to do the portrait and leave the copy underneath. I also put a stamp with the passenger’s number, the date, my signature and the link to my Instagram profile and my website.’

When he’s not overcome by embarrassment, Alberto leaves the original image to the person furtively depicted before getting off the train. Peoples’ reactions vary. And you may foresee how. Younger commuters tend to take the hint. They break into a smile. Even behind an anti-Covid face mask, there is a person. And being painted is not an ordinary experience… Yet, most middle-aged people are suspicious, perhaps because the suddenness with which Alberto leaves his drawings is associated with sellers or beggars’ way of behaving.

‘Some people are astonished. They keep me asking: I don’t have to pay you, do I?’

Alberto dreams about an exhibition or a published collection when lockdowns will be over. He believes that train passengers have much to say. What interests him the most is how people don’t realise that they have been portrayed since they are completely engrossed in their phone. They are overconnected, but at the same time alienated from their traveling companions or the landscape behind the train window. Mobiles, however, are Alberto’s most precious allies. They let him fill his agendas or his iPad with hundreds of stolen faces.

Check out some of Alberto Cavallari’s ‘Passengers’ pieces on his Instagram, or head over to Alberto’s website to find his whole amazing project.