The story of Harry Potter is one that has shaped and inspired the lives of countless people. Which is why so many people found themselves deeply hurt when Potter author JK Rowling posted a series of tweets attacking the transgender community. The author then went on to continue this misinformed rant in a blog post. In the post she lists five reasons why she not only stands by her previous tweets, but also the reasons why she is ‘worried about new trans activism’. Although the views may also be shared by other trans-exclusionary radical feminists, the children’s book author’s words broke the hearts of transgender fans all over the world. But author and illustrator Molly Ostertag had an idea on how to help.

Being a big reader from a young age, Molly explained that this inspired her to be an author. And after realising that it was easier to share her stories through drawings, her art was born; ‘I went to art school and was lucky enough to start making comics in the early 2010s, during a big boom in long form narrative webcomics and middle grade graphic novels. Exactly the kind of stories I was interested in telling’.

Like many of us, Molly’s childhood was touched by the stories of Harry Potter. However, following the anti-trans tweets, Molly’s views on some of her favourite childhood books have changed dramatically. She went on to explain to us that while she understands that everyone will process the hateful posts in their own way and may choose to carry on enjoying Rowling’s work, for Molly her previous love for the novels has been severed.

‘Harry Potter was a big deal for me, like so many nerdy kids my age. Midnight releases, drawing fanart, reading the books over and over…they were always a place of safety and comfort I could return to, and I took a lot of inspiration from JK Rowling to go into my field. I publish my graphic novels with Scholastic, and I always took some joy from being at the same publisher that brought those books to America. But the fact that she is transphobic – and that she chose to be LOUDLY transphobic when she knows she has a big following of young queer people; and that she published an essay about it during a huge movement for racial justice AND a global pandemic; and that she positioned herself as an ally to the gay community through doing this – has changed all of that. I won’t be reading the books again.

Separating art from artist is complicated. For things like movies and TV shows, they’re a collaboration between many people – but when it comes to a series of books, there’s a singular mind behind them. And when that mind is revealed to be so hateful…I don’t judge people who feel differently, but I personally can’t enjoy that art anymore.‘ 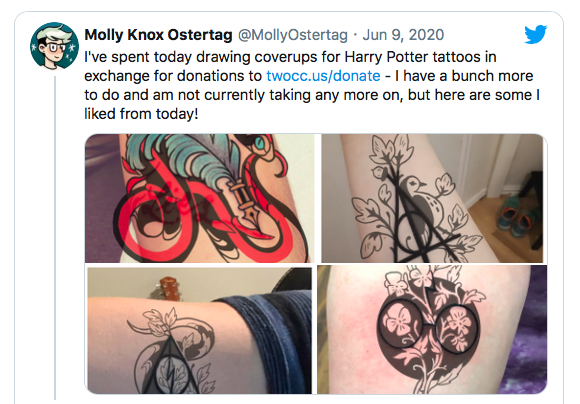 As Molly explained, the Harry Potter fanbase is full of people who also belong to the LGBTQ+ community. So for a lot of transgender people who have tattoos inspired by the books, most commonly the Deathly Hallows symbol or pair of round spectacles, they found themselves stuck in a difficult and challenging situation. Enter Molly Ostertag. Molly decided to put a tweet out explaining that she was illustrating cover-up designs free of charge for any trans people who wanted to cover their Harry Potter tattoo. She also said that she would continue to illustrate cover-ups of cis-people as well on the basis that they donate money to TWOCC (the Trans Women of Colour Collective).

‘The first two tattoos I got were my own designs’, she explained. ‘But as I followed more tattoo artists I realized what a specific art form it is, and how cool it is to get original pieces from artists. A few people have gotten my art tattooed in the past but I think it’s always best to work in collaboration with an actual tattoo artist. The Harry Potter coverups were a fun project, a way to help people who felt bad about their tattoos reclaim that piece of themselves.’

Molly has a produced a number of graphic novels over her career, ‘Witch Boy’ being just one of her fun and thought-provoking pieces. In this particular storyline the protagonist Aster is torn between a future that he was born to fulfil and the future that he desires. The story follows Aster as he learns to reject the gender norms that are forced on to him because of his gender, creating an inspiring and relatable character for children and teens going through struggles with gender norms themselves.

‘Yes, the Witch Boy series is absolutely about rejecting gender norms. I think the reason the JK Rowling stuff hits me hard is because I deeply believe in the power of stories – especially books for young people. The relationship you form with a book when you’re a kid is special. It’s a way to learn about yourself and the world and what kind of person you want to be. It’s something I take really seriously when I plan my books.’ 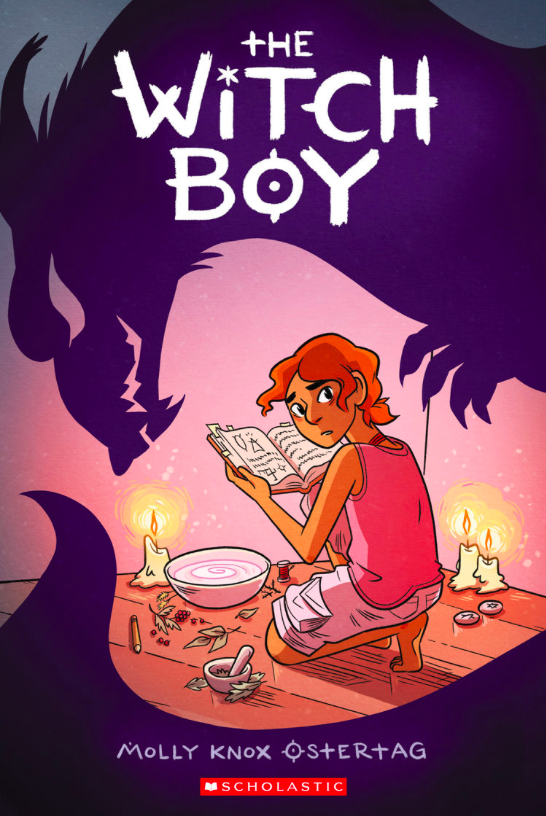 Being an LGBTQ+ artist and author, Molly spoke about the advice she would give to budding young authors/illustrators that are looking to create a magical literary world, much like herself.

‘I think a lot of queer authors are making the kind of stories we wanted to read when we were young. Don’t lose touch with your younger self and the pure joy you felt when you read and watched things that you loved. But also keep an open mind and keep learning and growing as a person, and incorporate that into your books. And this should go without saying, but if you become an incredibly successful author with loads of money and a huge fanbase, don’t use your platform to punch down.’