While 2020 could be described as one of the more turbulent years the UK has faced in recent history, people all over the world have taken their time over lockdowns to find new passions, and work on existing ones. One creative that flourished in 2020 was 18-year-old Nigerian-Scottish singer-songwriter Tayo Sound. The young artist released several singles and EP’s last year and is continuing to grow his discography and fan base with his unique sound. We got to chat to the emerging musician about one of his most popular singles ‘Someone New‘, his first memories of music and what he has planned from himself and his music. 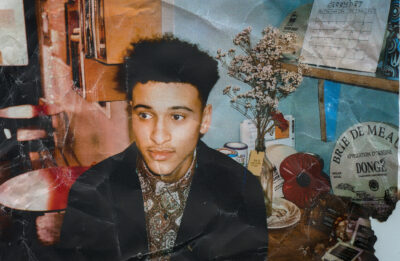 Based in Reading, Tayo grew up going to church with his family every Sunday. He explained to us that his first prominent memories of music came from attending church from a young age. ‘I remember being like four years old and seeing people play music every Sunday, I probably didn’t understand it at that point. I remember being really intrigued and wanted to mess around with instruments, they would give me a fake piano or a keyboard that wasn’t plugged in and let me think I was playing along.‘

As Tayo’s love for music developed, so did his taste in artists and genres. Much like us he loved some classic pop hits as he was growing up, and told us that his preferences have a tendency to change very quickly depending on what he hears or how he feels that day. ‘I think in the beginning it was just a lot of individual songs, just because we didn’t really listen to radio and stuff like that. So all the music I found was on Vevo, stuff like Sam Sparrow’s Black and Gold, or the Obadiah Parker’s version of Hey Ya. Right now I’m listening to a lot of US rock/emo/hip-hop kind of things, like Iann Dior, 24kGoldn, The Kid LAROI. All those kind of guys, but it switches like every week. Next week I’ll probably be listening to like Miley Cyrus or something.‘

Musicians, artists and other creatives all over the world have had to become even more resourceful over the past year. With live shows, galleries and music events put on hold, creatives have turned to social media in order to keep their fans updated with their latest work. Although artists and musicians alike have been embracing this ‘new normal’ way of connecting with their audience, there have also been a lot more pressure put on them to not only keep up this connection, but to also be creating new content for fans to enjoy. We asked Tayo if he had been feeling any pressure to keep up with these new, more intense tasks. ‘Yeah a little bit, because you can’t do anything live they are kind of the only ways to draw in fans now. But it’s also been really enjoyable towards the end of, well hopefully the end of this Covid thing. Like I’ve had to come to terms with things that I have to do and it’s become really enjoyable having to make things for Instagram. Whereas at the beginning it was a bit daunting because I didn’t know what I was doing, but now it’s fun.‘

One of Tayo’s most popular songs is his single ‘Someone New‘. The song takes us on a journey of someone trying to move on from a past love, and finding different possibilities in which he can do so. With a catchy beat and relatable lyrics, it’s no surprise that this song become Tayo’s debut on Radio 1 and caused a huge stir in not only his fan base but the music industry in general. He explained to us the process behind the song. ‘To be honest, it was the end of a studio session, we’d already done one idea and I was kind of freshly heartbroken. But that day was just a really good day, I was one month out of being dumped so like ‘first good day in a while’ kind of thing. And I was just vibing to be honest. There are certain lyrics that are about the situation, and then I’m almost kind of pretending that I’m like that type of person. Because ‘it’s way too easy finding someone new’ is definitely not true,’ he laughed. ‘So I guess it’s me pretending that I’m cooler than I am and having a lot of fun.‘ 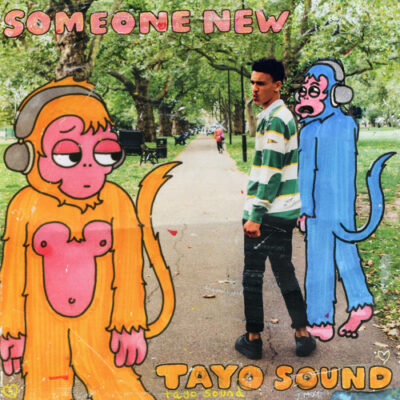 If you follow Tayo’s social media you will be familiar with two very important characters in his musical career; two very colourful monkey’s. Continuing to appear on his cover art, Tayo has incorporated these two friends of his as much as he can, he even asked his fans on Instagram to help him name his two cheeky sidekicks. We asked him where the monkey’s originated from and if he had completed his task of naming them. ‘Two very good questions. I think so, there was two names that I really liked. One was Tango which I thought was sick. And then there’s a Korean name, I have a lot of people in Korea that listen to my music and there’s this Korean show called ‘Tayo and The Little Bus’. So there’s a blue character called Tayo and an orange character, so like the monkey’s, and he’s called Nuri. And I was happy with that because it’s a cool comparison. The monkey’s just came really randomly, I think from the ‘Cold Feet’ music video I just thought up this crazy plot line about like zombie monkey’s that are also vampires from space who take over the planet and stuff. So I was pitching this to people at my label and they were like yeah we definitely can’t afford to do that. But I kept the character going and then hopefully one day I’ll be able to make my dream music video.‘

Explaining his music as ‘emotion driven‘, it’s clear that Tayo really puts his heart into not only his lyrics, but the music behind them. Although the usual song progression would be expected to work off of the initial lyrics, Tayo explained to us his unique way of creating music, and why it works for him. ‘I work with a lot of different people so it can be different each time. But usually I try to get a good chord progression, for me everything starts with chords, and then I work from there and just freestyle different melodies over that. Lyrics usually come last to me. I try and base the lyrics off what the melodies and chords are projecting, because I think it’s a lot harder for me at least to write lyrics and then create a song around them.‘

While we 2021 has been deemed the year that life may possibly return back to normality, everyone’s hopes for live music events returning hangs in the balance.  ‘So potentially, hopefully, finger’s crossed and all that jazz, I just got announced for Great Escape Festival. And then there’s a couple more things that I’m planning, but yeah it really hard at the moment especially with festivals and that kind of stuff. If any bands are reading this, I am down to do any show‘.

Head over to Tayo Sound’s Spotify page now to hear more of his catchy and unique tunes!