swim school on their debut EP ‘making sense of it all’

Since diving into the music scene just two years ago, Scottish band swim school have made an everlasting impression. The band have been tipped as a one to watch for 2022 following the recent release of their debut EP ‘making sense of it all‘. This collection of tracks explores mental states and pairs emotions with equally moving and thought-provoking tracks. And we were lucky enough to catch up with the bands singer-songwriter and guitarist Alice Johnson to discuss their latest project and the progression of the Scottish music scene. 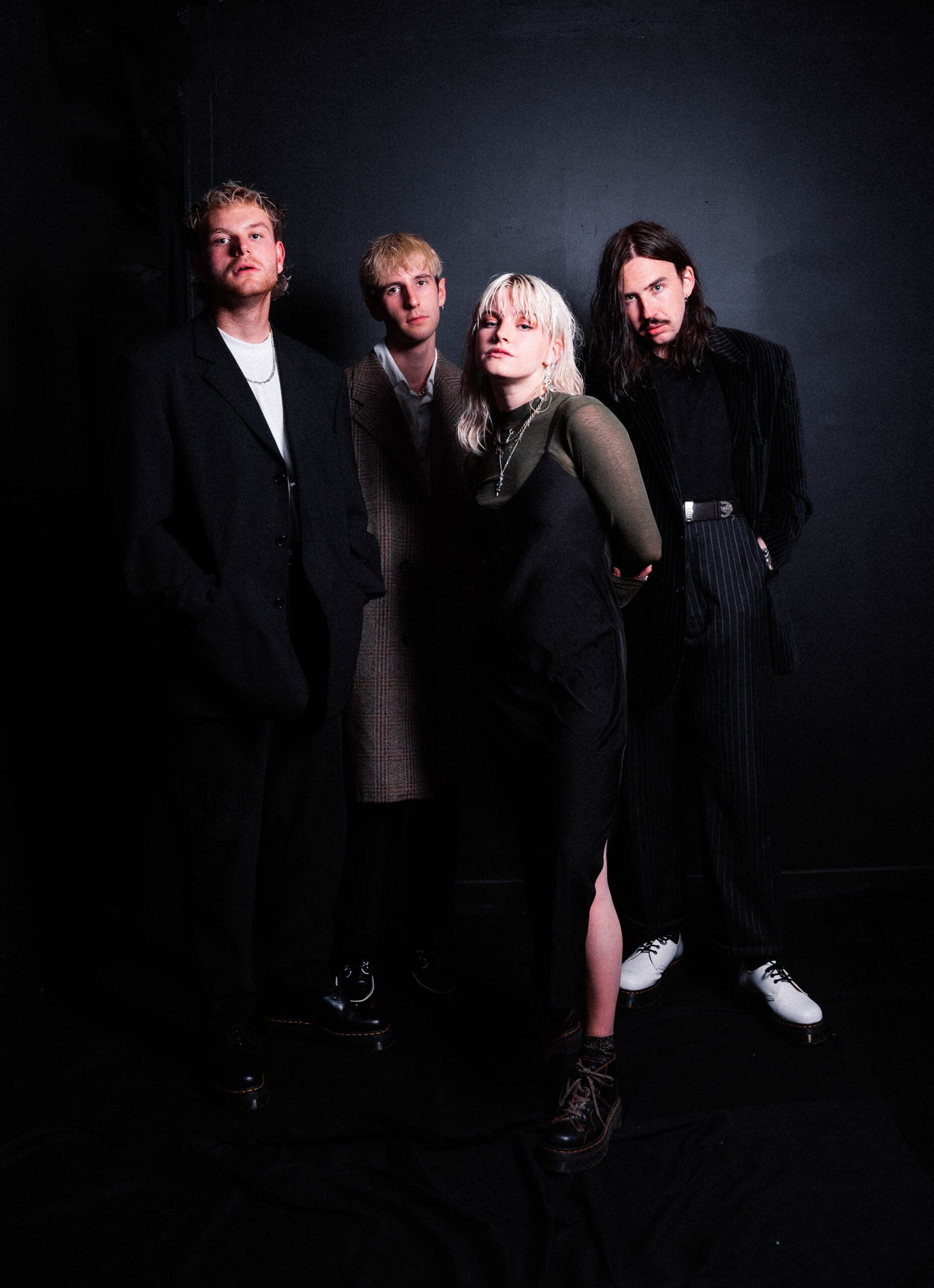 Of course we had to start at the beginning – where did swim school begin? While Billy (drums) came into the equation later on, the rest of the band have been friends for a long time. Although they are relatively new to the scene, the lead singer explained that they have hit the ground running with a number of festivals and gigs already under their belt.

‘I met Lewis (guitar) and Matt (bass) in college where we all studied music. We started writing together late 2018 and announced ourselves as swim school at the start of 2019. We had a class first year as a band and achieved some pretty big things such as playing TRNSMT, supporting The Xcerts on a full UK 2 week tour and also selling out our first headliner. When the pandemic hit, we decided to put all our time and energy into writing and developing our sound. All that hard work paid off as we released an E.P. that received a lot of love, played big english festivals such as Latitude and All Points East, for the first time as well as getting some amazing tour support slots such as The Snuts, Declan Mckenna and Coach Party – we couldn’t have asked for a better return after a year without live music.’

Coming from here there and everywhere, you would presume the group had different music tastes. And you would be right. Alice explained that their music differences are exactly what makes them create such unique sounds as they come together.

‘We have a lot of similar favourite artists and bands whilst also having our own individual and unique music tastes. I think this is why our sound is a bit all over the place, we never know what genre we fit into but we love that. If we all had the exact same music taste, all of our tunes would sound the same and it would be boring for us as musicians as well as our listeners. Having so many different ideas and references keeps our writing process exciting as we never know what kind of song we are going to write – I love that about swim school.’

And while their artistic styles are quite broad, they come together in unison when it comes to creating their own music. Alice explained that their process usually follows a regular route, but this was changed massively by the pandemic. Although she explained that they did manage to find some small silver linings.

‘Our writing process usually starts with one of us having a chord progression, melody or riff idea. We then pitch it to the rest of the band and work on it all together. Since we are all close mates, we aren’t afraid to speak up if something isn’t working or if we have another idea, we work really well together. Due to our first year as a band being so busy, we never had the chance to spend a decent amount of time on writing. When we got any free time in our schedule, we would write as much as we could. During lockdown, when we were legally able to be together and write, that was pretty much all we did. It was beneficial for developing our sound as we got to spend days on end working on each tune without the interruption of work or gigs, and it also benefited us as individuals. To have an outlet and a distraction during such a hard and scary time, helped us mentally and we are all so grateful for that. We managed to find the good in a bad situation.’

The Scottish music scene, much like the Irish industry is booming at the moment. While the Scots have always had a knack for music, recent arrivals from their pool of talent have put their names on the map as music innovators. We asked Alice why she thinks the Scottish music scene is thriving, and which fellow Scottish artists the group are listening to.

‘If anything, its motivation from all the big Scottish bands that are killing it right now. To see bands like The Ninth Wave, The Snuts, Lucia and The Best Boys and Lewis Capaldi all proving that it is possible to make your way in the music industry is very motivating. Everyone in the Scottish music scene is extremely supportive, big bands support small up-and-coming bands and it has a domino effect. Everyone is there for each other and thrives off each others success which is why there is a constant merge of new bands and artists.

Bands like Spyres, Happy Tears, Pressure Retreat, Cameo Habitat, Naomi Munn, Lewis Ross, Declan Welsh, The Ninth Wave, Vlure and Lucia and The Best Boys all creating their own genre and smashing it is so inspiring and motivating – it’s fair to say that the Scottish music scene is thriving.’

‘making sense of it all‘ is the band’s brand new debut EP. The 5 track compilation explores a number of different topics including mental health. Each song has a unique blend of sounds and sub-genres, perfectly connected by the groups very subtle, but very recognisable vibe. Alice went on to describe the EP in a bit more detail.

‘All of the tunes were written over lockdown. The EP is based on mental health. It was written in a time in which everyone’s mental health was being affected (the pandemic) and the subject of mental health was being talked about world wide – it was a hard time for everyone. Each song is based on something that happened during that year. ‘outside’ was the first tune that we wrote for the EP – there was something about its sound  that was different to anything we had ever written before so we wanted to explore that. Each track on the EP has its own unique sound. ‘let me inside your head‘ is dark and heavy, ‘everything you wanted‘ is our big sad song, ‘anyway‘ has an upbeat front but deep and sad lyrics and ‘see red‘ is our heavy and angry song. I love that each track has its own story and sound yet they all link into each other. The title ‘making sense of it all‘ basically means to make sense of a bad situation and to always try and see the good in bad.’

Finally, Alice left us looking towards the future. We asked her what we can look forward to seeing from swim school in the months and years to come.

‘Start of 2022 will be spent writing and recording which will result in us releasing some new music. We have a very exciting summer – we have been booked for some amazing english festivals that we cannot believe ourselves that we are playing. Some have been announced, some are yet to be announced. We are so busy that we think we might have to quit our jobs (which isn’t a bad thing). We would love to get a big tour support next year and also do a big headliner either in Glasgow or Edinburgh but we need to get summer out the way first – we are so excited for 2022.’