So you’ve protested against climate change – now what?

Why Calthorpe Community Garden offers an opportunity for green activism

In what seems like nothing but a concrete jungle with busy roads and commuters nearly running into each other, there’s an unexpected green escape from the urban landscape right in the heart of London’s city centre. Opposite Westminster Kingsway College, you can find the green oasis that is Calthorpe Community Garden, a place for community cooperation and environmental practice put into play. 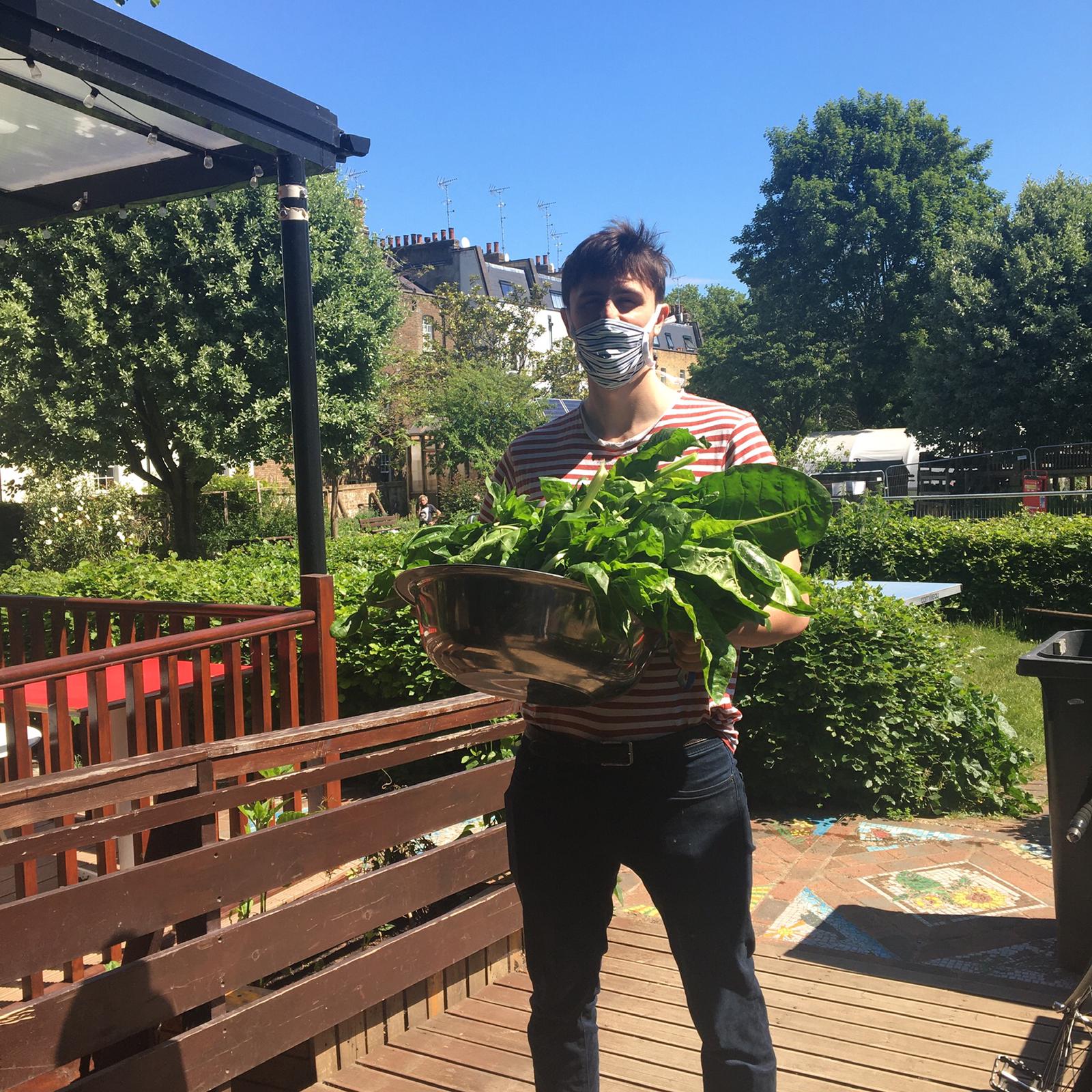 Volunteer showing off the goods

For those who aren’t able to march for climate action, or others who want to go beyond what is often criticised as green online slacktivism, the community garden acts as a locus for political activism even if it’s on a small scale – but with a big impact on its community.

‘I think people especially our generation think that activism needs to be burgeoning on this continuous energy of occupying spaces, which is extremely important to do, but it’s not the only form of activism.’

Jack, a volunteer in his early twenties, first stumbled across Calthorpe in the Autumn of 2017 when he wandered around London with the intention to re-familiarise himself with the city and meet new people after finishing university.

The garden is home to a wide variety of different plants, raised beds, and vegetable patches. In addition to their focus on food growing, they also use the space as a social hub for community events, as well as a nursery and a self-sufficient cafe – now closed due to the pandemic – that used produce from their own garden. The community has a strict zero-waste approach with a nearly closed-loop system enabled by for example turning kitchen waste into fertilisers and using bacterial fermentation for the soil.

Although many might not be familiar with London’s community gardens, the UK actually saw three million gardeners emerging out of lockdown, either out of environmental concerns or lockdown boredom. The rise of Extinction Rebellion (XR) and their predominantly young members perhaps dampens the surprise of discovering that the faces of nearly half (49%) of new gardeners are aged under 45. Now that the millennial’s love for houseplants is apparently killing the environment, it might be time to find an alternative to introduce nature into our lives.

However, it can be difficult to engage in the grow-your-own trend when one in 8 British households don’t have a garden, and if they do, they have to share it with other residents, with the percentage increasing fourfold when comparing the homes of minority ethnic citizens to those of white Brits. 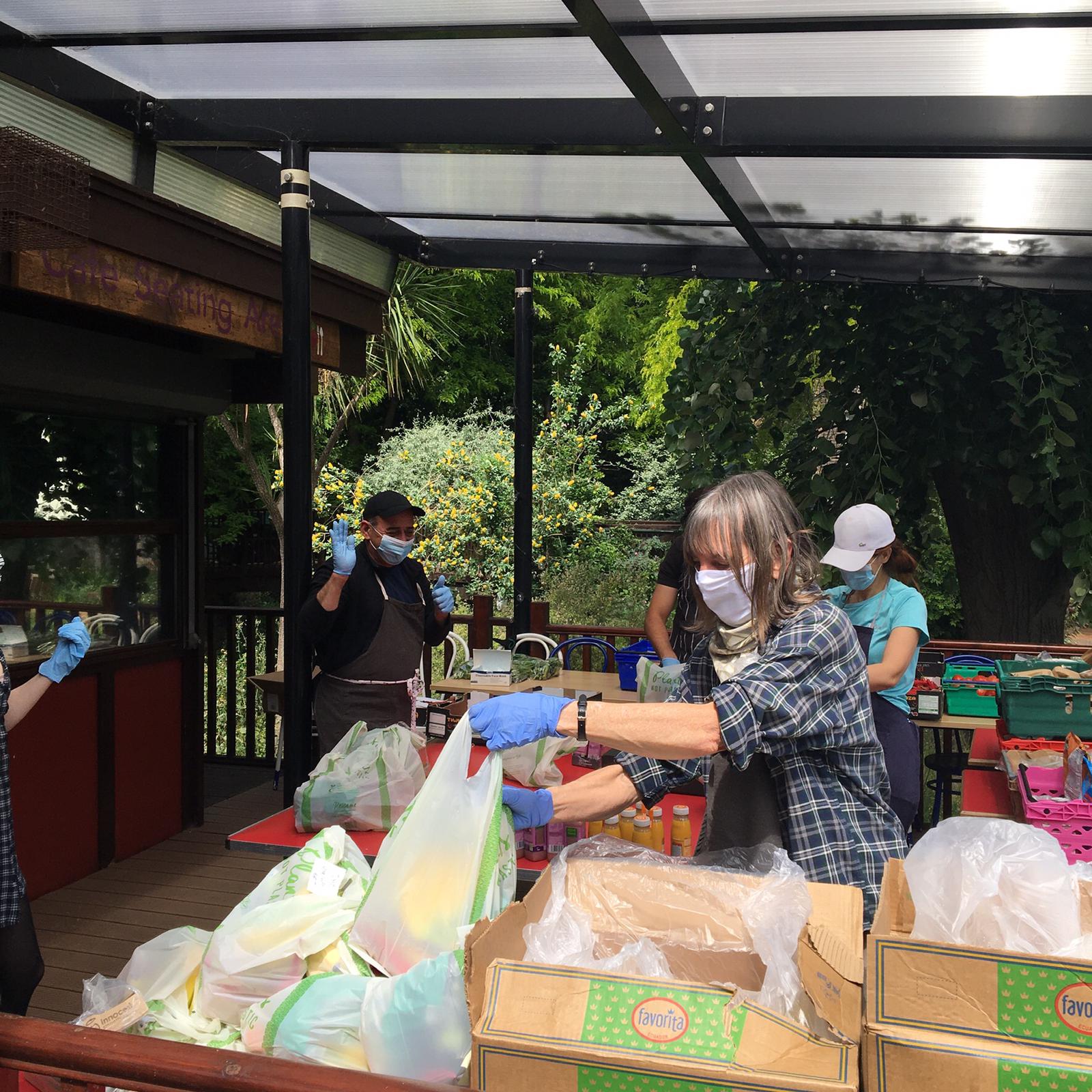 Environmental activism is inevitably at the intersection of several issues, ranging from food insecurity and social isolation, to problems created by gentrification. As emphasised in David Attenborough’s popular documentary A Life on Our Planet, healthier, more affordable food is not only good for its people, but also for the environment, and should be one of the main points of focus when trying to tackle the climate crisis. One of the things that the garden was already involved in before the pandemic was The Felix Project, which acts like a hub for collections of unwanted food from supermarkets, restaurants, and farmers. In response to the Covid-19 pandemic, they also decided to donate surplus produce to food banks and even sent out seeds in envelopes to their volunteers to encourage food growing at home, while sharing their progress and tips and tricks through WhatsApp.

Increasingly more people turned to food banks during the pandemic, one of the biggest obstacles to accessing affordable food being social isolation. But half (49%) of parents with children experiencing food insecurity are socially isolated regardless of lockdowns exacerbating the problem. Gentrification forcing locals shops to close down and getting replaced with either more expensive alternatives or non-food related businesses only adds to limiting local residents’ access to food. In a particularly jarring but illuminating quote by the former deputy chair leader of the Food Standards Agency Suzi Leather back in 2001: ‘In some states it’s easier to buy crack than fresh fruit.‘

As vital as local initiatives are to support the wellbeing of local communities, Calthorpe Community Garden is still struggling. Unable to use the garden to its fullest, they lost approximately £13,000 each month, which is the amount needed to provide food for over 48 households and a support system for the surrounding community. Mila, one of the managers at Calthorpe, tells me they are still reliant on grants but want to move towards a more sustainable social enterprise model by for example making the cafe available for events, running a mini garden centre that sells plants grown at the garden, as well as offering training and workshops for those interested in learning about environmental practices.

‘I’ve been here for a long time, for 20 years, but I’m trying to ask what new volunteers would want from us in return for helping out. Maybe students can be part of the solution to the problem, they can bring ideas,’ Mila tells me. 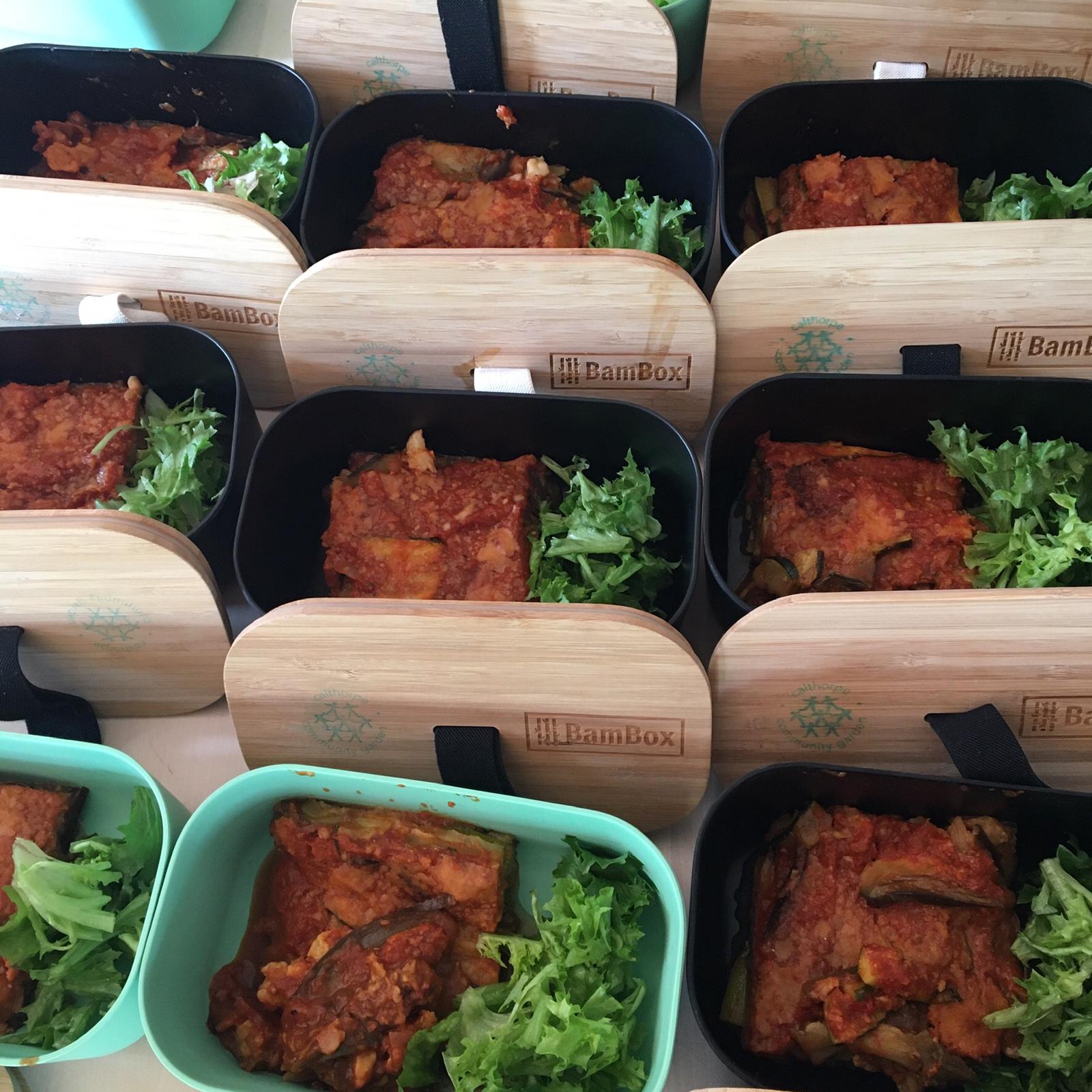 Calthorpe prepping for the food bank

‘Many, many years ago, we were functioning like a volunteer place. So everything was run and done by volunteers. But society kind of changed; the government was pushing people not to volunteer, not to be parents, not to give, not to vote.’

She tells me about a student from Taiwan who found London increasingly isolating during lockdown as all of her friends went home. Bridging the gap between young and old, and foreign and familiar, the garden helps facilitate a space in which social connections and wisdom can naturally be exchanged between groups.

‘Nobody is anonymous here, you feel very familiar and sometimes young people are lacking that interaction with people from different ages. It’s also just very nice to be part of society in an active role and doing something that is good for the environment.’

Maintaining the garden is a highly creative practice, too. She tells me they would like to incorporate ideas from young designers who could for example use recycled materials to build tables for the garden, or ‘someone with a vision’ to help her display all the plants she’s busy propagating at this time of the year. But with little funding and a small – although loyal – pool of volunteers, they’ve been busy dealing with more immediate tasks such as tending to the food bank, especially during lockdown.

‘For example, we are doing soaps and preserves. So if I could find volunteers that would come here to help us but to learn as well, that would be great. And then that produce can be sold, or the propagated plants could be sold.’

Whether it’s providing a safe space for children to play, looking after the individual allotments, or getting together to use the garden to celebrate anything from volunteers’ birthdays to their cultural traditions like they used to before lockdown, Mila points out the symbiotic relationship between Mother Nature and its people. Studying permaculture many years ago, one crucial pillar always stuck with her: Look after the people, so you can look after the earth. 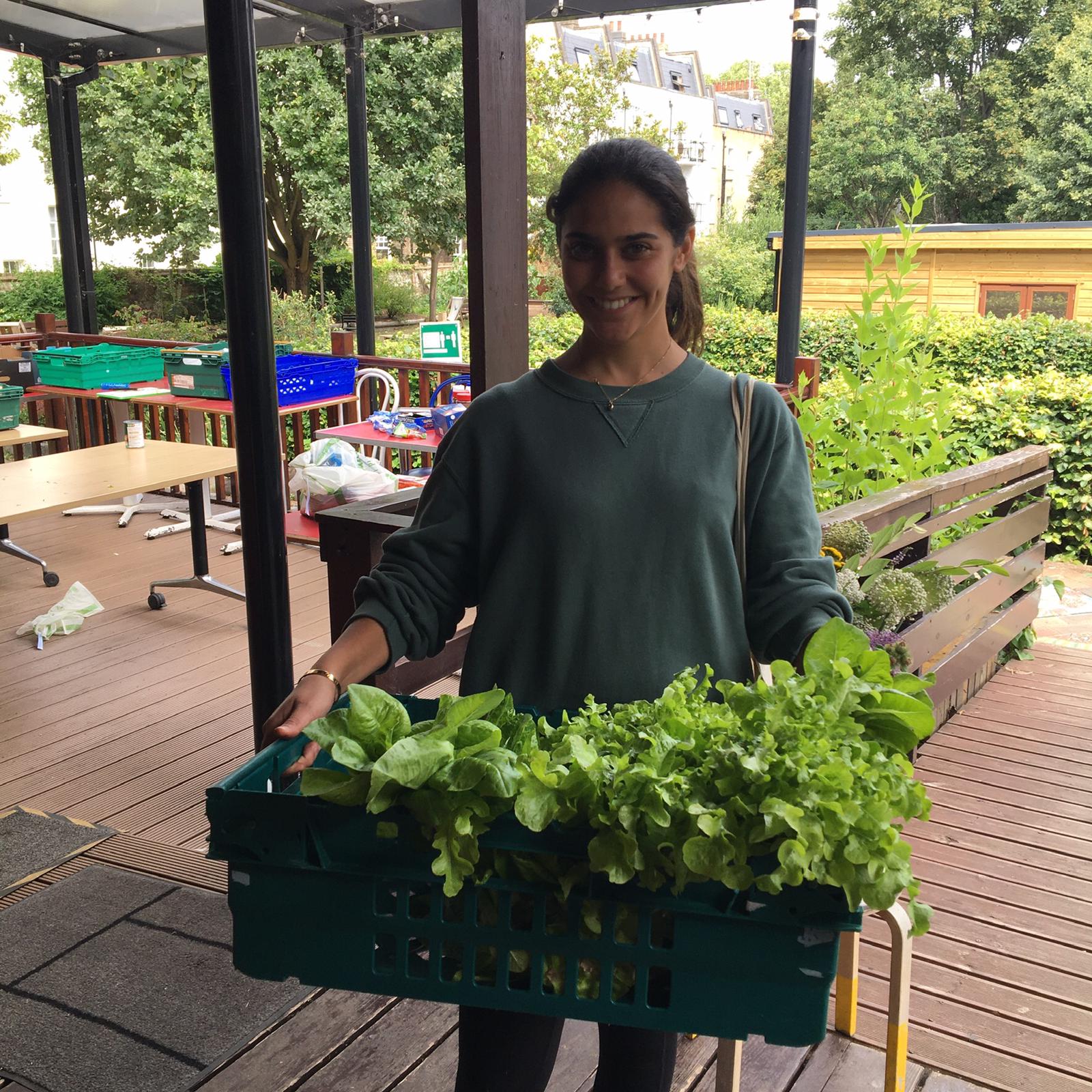 The garden operates on a horticultural basis, also called Social and Therapeutic Horticulture, which is a practice that focuses on developing the physical and mental wellbeing of the communities, particularly those struggling with disabilities, through the process of gardening – a practice needed more than ever after a year of isolation.

‘If you have both the emotional and physical basics secured for people in general, then you can think about the environment,’ she tells me. ‘That’s what we do when we are a community.’

Community effort is at the heart of the climate action enabled by Calthorpe Community Garden. But even without the disruption of climate change deniers, there has been a lot of tension around the right way to approach environmental activism. The brief quarrel between Sir David Attenborough and Extinction Rebellion last year portrayed these tensions well: While Attenborough criticised their practices for often disrupting ‘innocent people’s‘ lives, saying that they ‘could disenchant an awful lot of people from the action that we’re talking about‘, an XR spokesperson accused him of focusing too much on individual action instead of changes in government policies.

‘In my opinion there is a two-part approach to environmentalism,” Jack tells me. “It is obviously very important to argue for structural changes on a very large level, absolutely. It’s really important to take on key players in all different parts of the economy, supermarkets and food producers, because they’re creating demand for these industrial processes and obviously that has negative effects on the environment,’ he continues.

‘But while certain environmental movements or groups might have good intentions, I think often unintentionally they end up isolating people who might not feel comfortable going on the streets and marching and their particular way of showing their environmental activism. I think a community garden welcomes people in and shows them that they can participate in this too and it’s not scary, it’s not divisive, it’s actually bringing people together.’

If you’re as tired as everyone else of green slacktivism and are eager to get your hands dirty, London’s green oasis might just be the solution you’ve been looking for.