Leicester-born SOFY has only recently appeared on the music scene, but what a mark she has already made. Her witty lyrics and upbeat tunes blend a mix of summer nostalgia and modern day boredom. Much like fellow Leicester-made band Easy Life, SOFY’s music takes a new observation on everyday problems and situations and layer them over tracks that want to make you forget the stress of the day, grab a beer and find some sunshine. 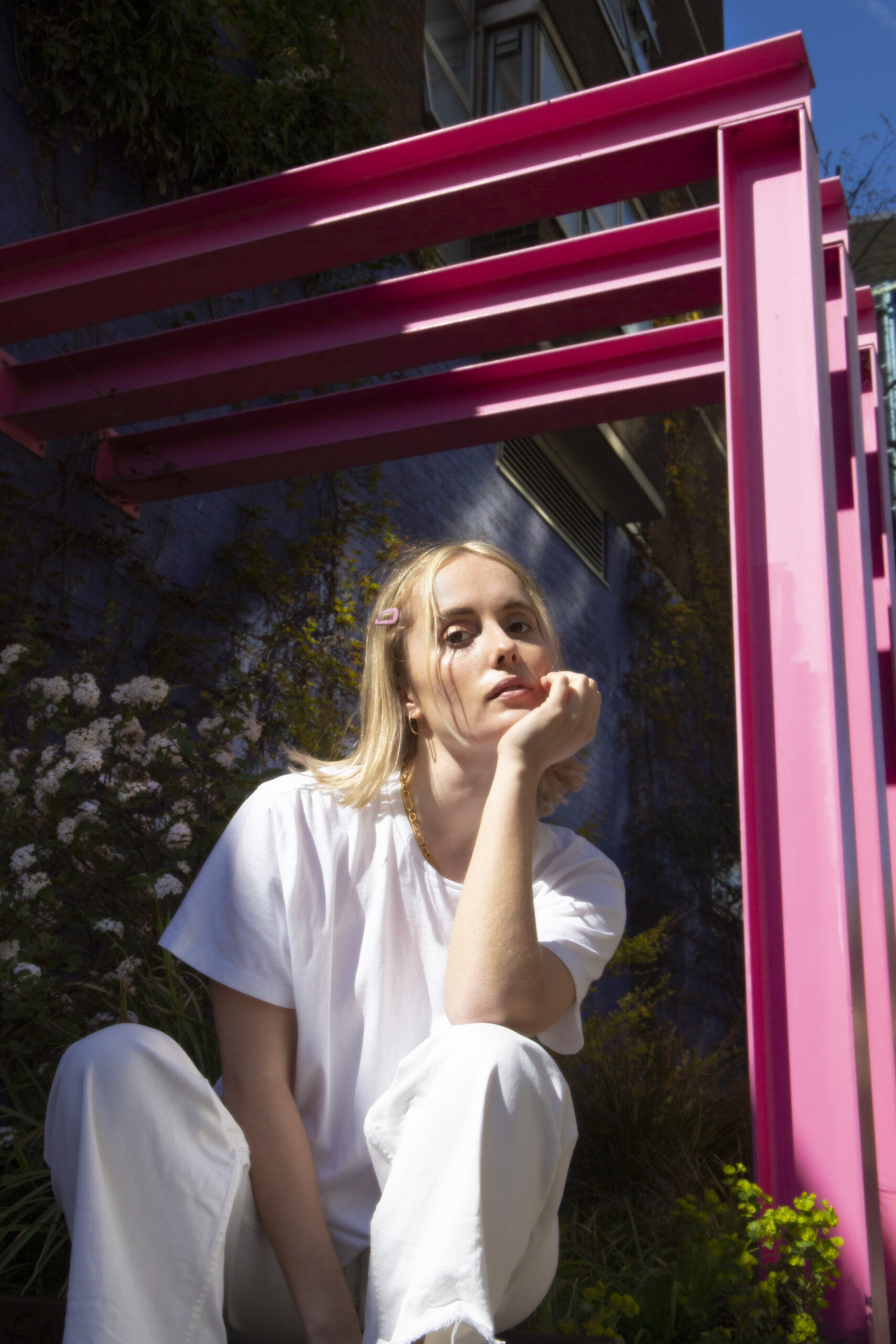 SOFY didn’t join the music industry until last year. But she jumped in head first. Runner up in the BBC Radio 1 Live Lounge’s nationwide talent, the 24-year-old got further in the programme than over 10,000 applicants. She was also selected as the most promising new artist in London over 4000 entires in the capital alone. While she is still new to the music industry we wanted to know where her love for music started and what pushed her to start creating her own.

‘My mum playing all of her 80’s pop that she’s obsessed with. She has an amazing collection of 80’s synth-pop vinyl. And then my dad is really into Brit-pop, so very into Oasis, Stone Roses. So the fusion of those two in the house when I was a kid.

I got put on furlough in the pandemic, and I’ve always been into music but I’ve never really tried to write before. I thought I’d give it a go and got absolutely obsessed with it, and still am. I was originally using samples from Splice and write lyrics over it. And now I’ve been working with different producers and I love working collaboratively and having other peoples influences. Everyone’s had different experiences so it just makes for a better tune.‘

While SOFY’s music is new to the industry, it is safe to say she has found a unique sweet spot. Her tracks explore relatable topics that make you accept what’s going on, however bad it may be, and dance to the music it arrives with. For this reason it is hard to confine her music to just one genre. So we asked her to sum up her music outside the constraints of genre, and her answer did not disappoint.

‘Ok so this is how I always explain it to my manager… If Easy Life and Jorja Smith were fucking and OutKast were watching,’ she laughed. ‘Easy Life vibes, production, conversational beats, off the cuff fun. With Jorja Smith melodies and a bit of OutKast feels throughout.‘

‘Strawberry Milkshake‘ is SOFY’s latest release. The track explores the feeling of being unsure but following your gut. SOFY went into more detail about how the idea for the track came to her a bit about the process that went into it.

‘Strawberry Milkshake came from a concept that I had in my head that I’d been thinking about for a while. Basically not overthinking things and just going with your gut and even if other people aren’t into it, if it feels right for you that’s fine. The song is in the context of a relationship but I think it can apply to a lot of different situations in life.‘

We were lucky enough to catch SOFY’s live performance at The Scoop on the 30th September. Teaming up with BBC Introducing to bring the summer to a funky end, SOFY and her band excelled, even in the rain. They were also joined by emerging band Bamily and dance music extraordinaire Bklava. SOFY spoke to us about how she found the performance.

‘Our show at The Scoop with BBC Introducing was one of the highlights of the year for me. It was so special to play for such a fun crowd full of friends and new faces, and supporting Bamily and Bklava who I’m big fans of was wicked. But the best part for me about playing live is just having fun with my band – I’m super conscious that these early shows are going to stick in our memories for a long time and we’re just trying to make the most of every minute of them! I feel so lucky to have the boys, we’re all really close and love performing together so much – I think that vibe really comes across to the audience which is cool.’

The future is looking bright for SOFY and her music. While we wait with baited breath for her next release, she is busy working on more and more projects to put out throughout the next year.

‘The first EP is going to be coming out in January sometime. I’ve got a lot music written, we’ve been writing a lot. All of this stuff happened with live lounge introducing back in April but we didn’t really have that many songs at the time so we wanted a lot to choose from to release. So I’m glad we have a solid amount of songs that we can start feeding out, and there’s no pressure so we can enjoy the process more.‘

Head over to SOFY’s Spotify page to hear her latest track ‘Strawberry Milkshake‘.