Falling in love with the tracks of songwriters from a young age, Olivia Dean has gained a huge following with her own divulgent and identifiable tunes. As lockdown begins to ease she has been able to perform a tester-tour and make plans for fans to experience her melodic and catchy music live once again. After releasing her first single ‘Reason to Stay’, back in 2018, Olivia Dean has earned an ever-growing fan base, released accompanying music videos and collaborated with well-known British artists such as Rudimental. Her unshielded lyrics allow us a window into her love life, both the highs and the lows. We got the chance to chat to her about the story behind her most recent single ‘The Hardest Part’, and how she’s found performing post-lockdown.

As Olivia entered the screen with a backdrop of a beautiful garden and a cup of tea, she explained to us how her lockdown experience has been. ‘I was by myself for three months, which was quite hard. At the beginning I was like ‘yay I’ve got all this free time. And then after a month or two I was like no this is quite hard, just looking at my same face everyday. But I think I learnt a lot about myself in lockdown, I’m in a good place now I think.’ She also told us that after moving in with an actress and fellow musician, she has been constantly surrounded by creativity in her South-East London pad.

Growing up with different musical influences from both of her parents, we asked Olivia who or what inspired her to start creating her own music. ‘Who inspired me? I think when I was younger I Loved Aretha Franklin, my mum would listen to a lot of motown stuff. My dad would be like Carole King, and then I sort of found Amy Winehouse. Those sort of songwriters are what got me into writing my own songs and trying to express how I was feeling. I Would say those were my top three when I was a little Deano and just getting into music. And then I discovered more music, like Paul Simon I fell in love with when I was doing my GCSE’s and his songwriting style. I really like songwriters, I’m intrigued by lyrics. So I think those were the key ones to get me started.’

All of Olivia’s songs tell a different story. While they are relatable narratives to a lot of her listeners, they also exude her own, very personal experiences. She explained to us that while she has written songs in the past from other people’s perspectives, she usually writes from her own experiences cathartically. ‘I would say the majority comes about from me trying to process things that are happening in my life. Sometimes I’m not very good at communicating my emotions with talking. So I find it easier to just go into a room and figure it all out and write it down in song form. It’s quite therapeutic song writing. So it’s pretty much just me trying to figure out my life.’

Leading up to Olivia’s newest EP release later this year (What Am I Gonna Do On Sundays), she shared her newest single ‘The Hardest Part’ which has been welcomed with a lot of excitement from fans. Like her other songs, the lyrics are heartfelt and tell a story of her moving on from a relationship. ‘Yes the Hardest Part. So I went to Copenhagen to do writing with these guys that I’ve written with a few times before. Who I actually wrote my first single with, Reason to Stay. And I had literally just come out of a really serious relationship that I was in for two years. And it really felt like the closing chapter, you know when you’re closing a chapter and starting a new one. And I just didn’t want to be really sad. So I just wanted to write a song that was like a positive outlook on moving on from someone and growing up, and accepting that we’re different people now. And it’s sad but unfortunately we can’t really go back so we need to go forward. So The Hardest Part was really a song that I needed to write for myself to just remind me ‘You’re moving on babe and you’re doing OK’. 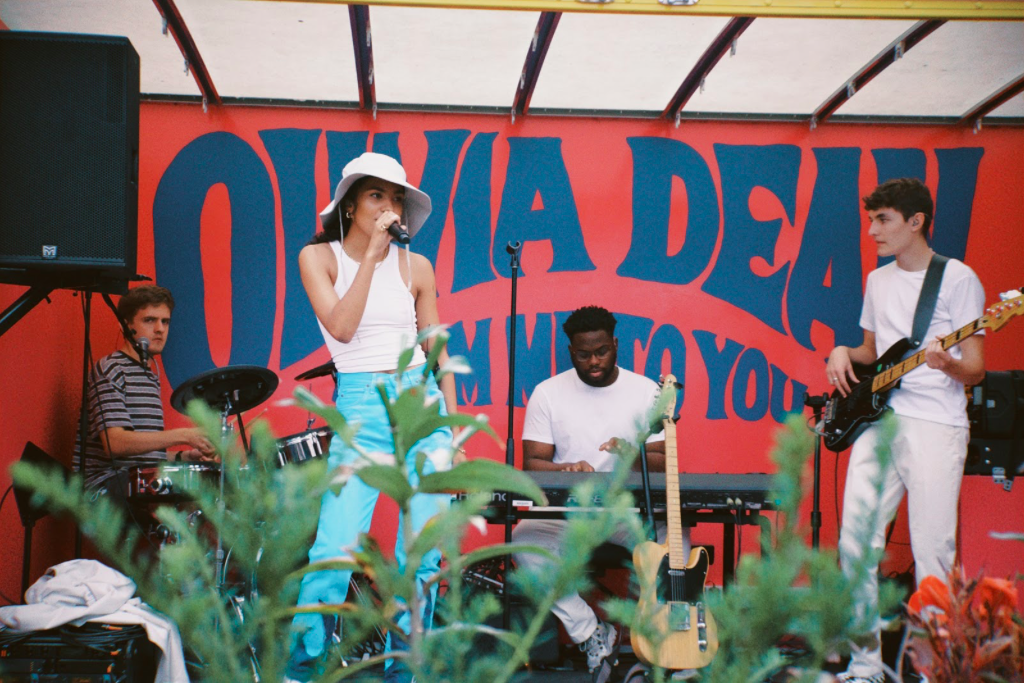 The video for ‘The Hardest Part’ was released on the 7th of August and has a very vintage feel to it. Following her motown influences growing up, Olivia decided to steer the video down a Supremes-inspired route. She explained to us how she worked around lockdown with her team to be able to create the video. ‘We filmed it during lockdown. I just had this idea, because of the motown stuff and my mum with her sister and my other auntie would pretend to be the Supremes with the hair and everything. So I thought how fun would it be if I did a video where I was all of the Supremes. So we came up with the idea and then lockdown happened and I thought how are we actually going to be able to do this? Spoke with people over zoom, and learnt the choreography over zoom. And I had to learn like three different routines because I had to film it three different times. And then towards the end of lockdown we managed to get into a studio and film it. It was wicked, it was the most fun I’ve had on a video shoot. Just so fun. But quite exposing because obviously there was no props, just me. Me three times.’ she laughed. 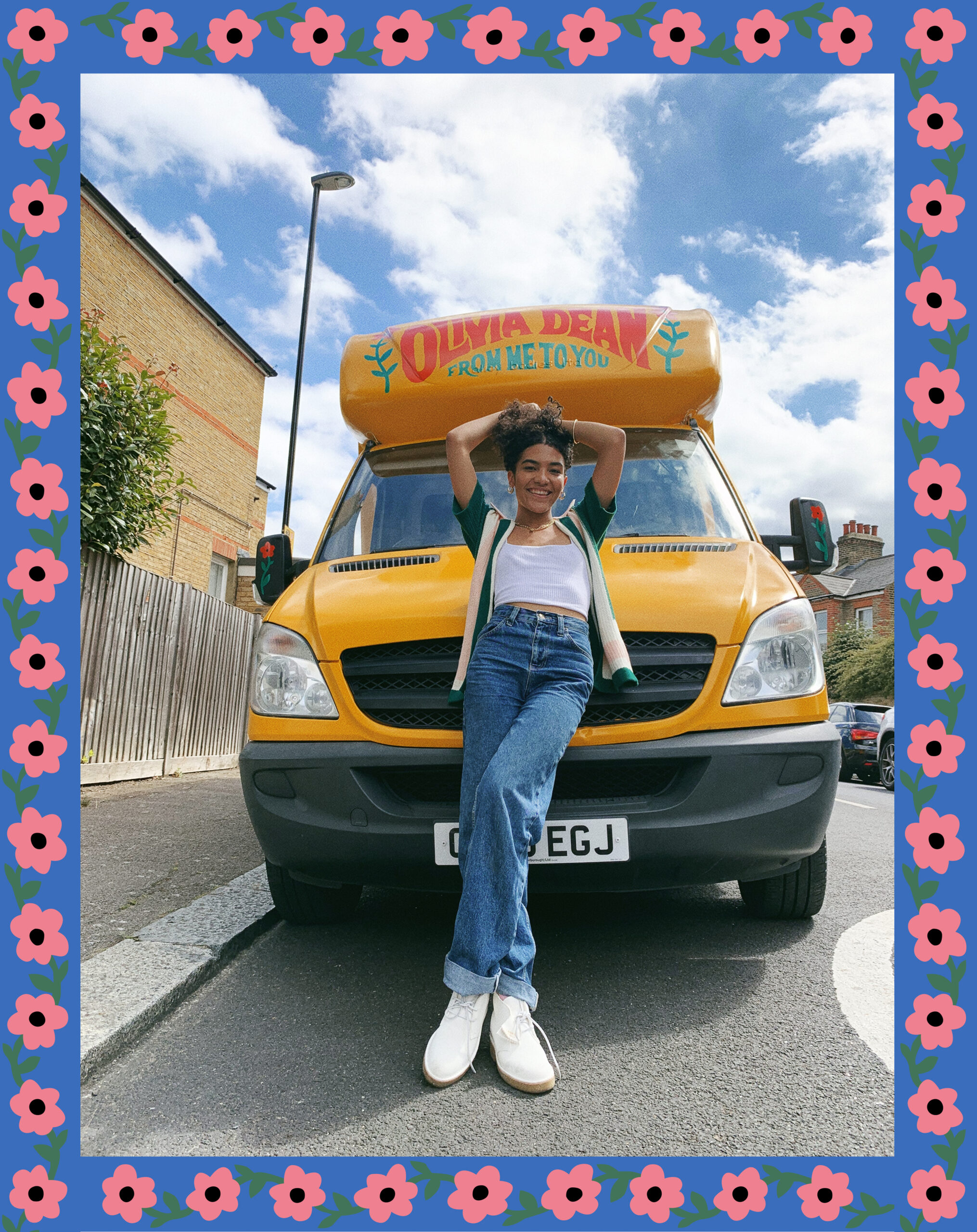 With lockdown restrictions starting to ease and small music venues beginning to open up again, Olivia and her band decided to run a small music tour. The ‘From You To Me’ tour consisted of shows in Tottenham, Newquay and Glastonbury, so that Olivia and her band could get a feel for how a tour would fit in the ‘new normal’. ‘It was wicked. We did a sort of test run in Cornwall last weekend just to see A. does it work, because with the truck the whole idea is that it runs by itself. And B. to see what people’s reactions would be, it was great. The generator did break on the first day. We drove up onto this campsite and I think some vines or something got caught around the generator and it broke, so we had to improvise and get power from other places. But it was wicked, I can’t wait to do more shows. Now that we’ve sort of got into it I just want to go all over and do live music. It just felt so good to perform really.’

After not being able to perform live for a considerable amount of time over lockdown, Olivia explained that she had a substantial amount of nerves leading up to the first show of the tour. ‘I don’t normally get anxious about performing because I just love singing, it’s really great’, she laughed ‘I do, I love singing live it’s my favourite bit. But the first gig I was super anxious before, because I was just thinking god I haven’t done this in so long, no one’s seen live music in so long and I really want it to be good. I wanted people to enjoy themselves, but I had to step back and be like I can’t really control what other people feel, I can only control me enjoying this. But it was really good, I mean I think it went well.’

She also explained that she not only experienced anxiety before the shows but that it was also very present within lockdown itself. Being a rising artists in the age of social media can be difficult, as Olivia explained to us. Not only is there general verbal pressures to keep productive and creative, there is now online pressure and a demand for content. ‘Even before lockdown I would sometimes get quite anxious about social media. I’m a bit of a granny, I prefer doing things in person. I love the live stuff, and the Instagram stuff just stresses me out sometimes. But then suddenly everything’s moved online now and you have to do livestreams and you’ve got to put yourself out there. And there was this pressure like ‘Everyone’s got to write their novel now!’ or ‘Write an album!’, and I’m just like no I don’t want to. So it took me a while to just step back, get a bit of perspective. And then I ended up enjoying the livestreams actually, but it was just the initial pressure that I think everyone felt to be creative. I was like actually I should just chill and just do yoga and relax. I should take a break’, she laughed.

Olivia’s spotify page not only shows all of her catchy soul-pop tunes, but also personally put together playlists for her fans to enjoy. Filled with artists from Otis Redding and Dionne Warwick to Khurangbin and Solange, much like Olivia’s own music, these playlists have everything you are looking for if you fancy chilled and happy vibes. With such a wide range of old and new preferences in music, we ask Olivia what her go to karaoke song would be. And in the midst of some very confusing and scary times, her upbeat answer did not disappoint. ‘Very good question. I have a few, I like karaoke, I do. There’s a place sort of near to where I live and it’s a pool bar and karaoke place that’s open until 4am every night. You get what I mean, it’s dangerous. I would say right now, because this has also been my lockdown anthem, ‘I Will Survive’, Gloria Gaynor. If you’re drunk and singing that, you will survive.’

While post-lockdown plans are still very confusing and hard to predict, especially in the music industry, Olivia let us in on her plans for the future. ‘I sort of spent lockdown trying to finish stuff. I’m one of those people that starts lots of ideas, and I have loads of demos and then just move onto the next thing. But I was actually like OK let me stop and actually finish some things. So I have actually got two other songs that are finished that are separate from the EP and should come at the end of the year. And I’m now just starting to write my album, that’s my plans really to just go for it. So I’m getting into that mindset of what I want to say with that and what I want it to sound like. But yeah that’s my plan. In a relaxed way.’

Olivia’s newest EP ‘What Am I Gonna Do On Sunday’ will be released later this year, but in the mean time go and check out her beautiful collection of music HERE.