Leeuwarden-born GINGE is making her mark on not only the Dutch music scene, but worldwide. With a sea of beautiful red hair, and a unique blend of the new and nostalgic in her voice, it’s no surprise that she has grown a huge and loyal following. Finding her passion for singing after releasing covers of her favourite songs on YouTube, GINGE decided to try her hand at writing and performing her own tracks. We got to chat to the flourishing artist about her latest single ‘YLS‘, her inspirations and how she’s dealt with the pressures of being an emerging artist during a pandemic. 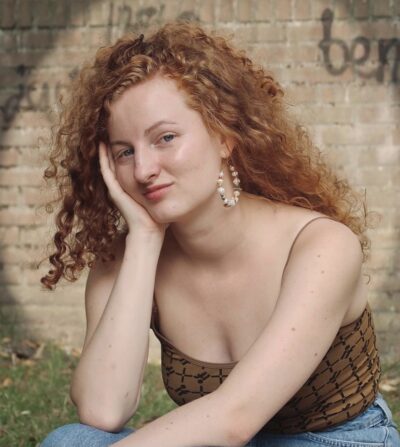 GINGE aka Renée, explained that her love for music developed following her passion for the theatre. She told us that her mother constantly reflects back to when she was young and creating musical stories to serenade her family with. Although her love for music started so early on, it wasn’t until the past few years that GINGE understood more about her amazing talent and realised she wanted to persue it as a career.

‘That’s a good question. When I was a kid I always wanted to be an actress, so I was already into story telling. So music started when it was incorporated into that. My mum always tells me, she was once riding her bike and I used to sit on the front and sing stories about the things I saw. So it was more of a theatre thing than music, but I did always sing with my mum in the car, and my dad always used to play a lot of songs by Toto also during car rides, so travelling was when I sang the most. But it wasn’t until about three years ago now that I started to take it really seriously.

Not only have all these different artists and genres influenced the different stages of GINGE’s life, they have also influenced her music. Finding her own unique blend of genres against immersive, storytelling lyrics, GINGE’s tracks are instantly recognisable. With this in mind, we asked her if there was any particular way she would define her sound.

‘Well, I don’t know if I have one name for it. I think it floats somewhere between R&B and pop. But some of the singles I put out last year have more of an electric feel and are a lot higher in tempo. But right now, and with the last two singles, I want to take more of a neo-soul,  jazz, R&B influence.’ 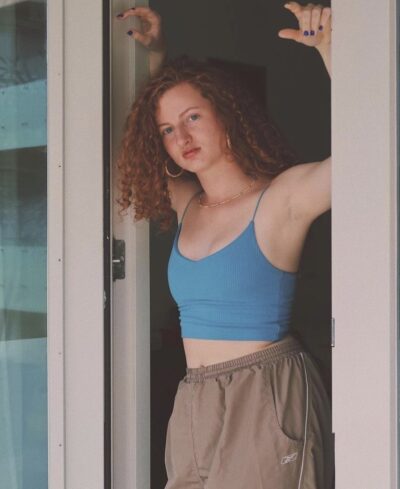 Her most recent single ‘YLS‘ has been well received by her loyal fans, and only adds to her ever growing discography. We asked GINGE to give us an insight into the story behind the track that will give you instant nostalgia for parties in summer evenings.

‘‘YLS’ stands for yellow long sleeve. I always keep notes in my phone, so the producer of this song sent me a beat and I went scrolling through my phone and found a note where I’d referred to someone as the yellow long sleeved guy. So the song is about him and going out, which we can’t now obviously’, she laughed. ‘But in the time that we still could. This guy just popped up at a lot of different parties, and I recognised him and we flirted a bit but we never took a step further. So at every party we were excited to find each others faces in the crowd, and I think we both thought we don’t know if taking the next step will ruin it because it’s fun at the moment. Kind of like hide and seek.’

With the pandemic came the end for live music events as we once knew them. For now artists all around the world are having to adjust to the transition from performing live, to performing to a screen. Live streams and IGTV’s have been both a blessing and a curse for some artists, with now added pressure to not only continue creating new music, but to also keep up with the social media content their fans love so much. GINGE explained to us that while she has found it strange not being able to gauge how her songs have landed with her audience, she has also enjoyed having more time to learn how to present herself through social media.

‘Well I did already like Instagram a lot, I really like taking pictures and defining what my brand is on there. Last year I didn’t really know how to fully describe myself and now I do, so it’s a fun journey to find out how to present yourself. Before the whole pandemic started I was just getting involved with a band and we were expanding the live shows. So we had this moment of momentum, and then the pandemic started so we didn’t really have time to establish ourselves but we were getting there. It just really sucked that we got stopped at that point. I did a few live streams, a lot of them are acoustic because we can’t play with a whole band. I do love playing music but it is weird that you stop playing and you just don’t hear anything. Like you don’t know if it’s made someone feel something or whether it just hasn’t landed at all. It’s somewhere in between making a video and playing a live show, so it is weird. But it is what it is and I’m happy I still get to play music.’

While the future of music events is still hanging in the balance of 2021, it is hard for creatives to fully plan for the foreseeable future. However, GINGE is staying positive and open to the possibilities next year holds.

‘I would like to get started on a project with a lot of songs on, like an EP or something for next year. It is hard though, because I want to be able to do that and have a release party or something. Because I really like to celebrate every step I’m taking. What’s been really nice is that, these last two songs that I released were released during the pandemic so we couldn’t celebrate, but they did land very well. So I think I will carry on releasing stuff, I’m not sure when the next one will be but when it comes down to a full project, I would like to have things surrounding it rather than just putting it online.’

Head over to GINGE’s Spotify page now to listen to more of her unique and catchy tracks.