In the age of social media, apps like Instagram are for so much more than keeping up with your friends social lives. And as creative accounts are on the rise in a global pandemic, the food world has taken over the web. Food vlogs in particular have risen considerably in popularity. And one foodie in particular has had her audiences hearts racing, not only with her cooking skills but also her sensual commentary. 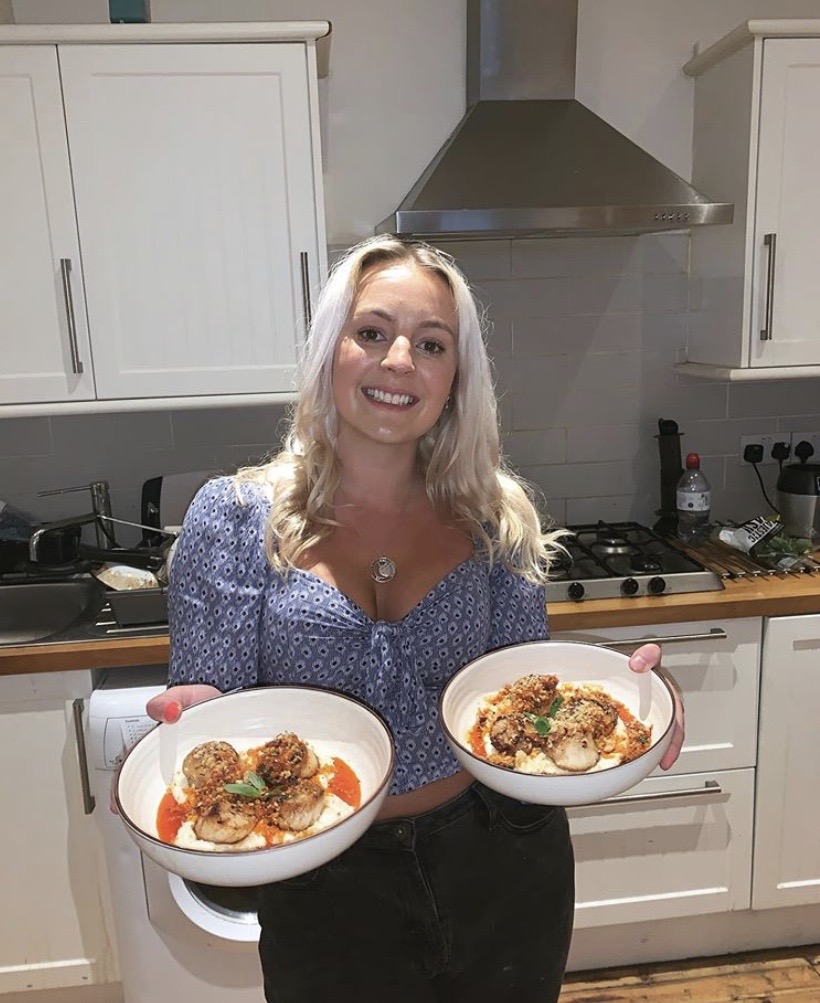 We spoke to Anna – AKA @sexyscottishscran while she was finishing her time in isolation after unfortunately contracting coronavirus at a dinner party. At just 22 years-old, Anna has packed in a lot of different foods and cuisines within that time. She explained to us that her passion for food now derived from a much younger love affair. ‘I feel like I’ve always been quite a fat child, like I would honestly just eat anything. My mum showed me pictures the other day of a time I’d had a croissant for breakfast and went and buried part of it in the sand, and went to dig it back up later to finish it. I feel like I’ve always been such a foodie. And my mum is a really good cook. It’s basically all I spend my money on is going out for food, and just eating a lot. Just an obsession basically.’

Although she is temporarily banned from her kitchen, the young food-lover explained that her favourite thing to make is not at all complicated, but sounds mouth-watering. ‘It’s quite weird actually, because mum’s cooking all my meals because I’m not allowed to be in the kitchen. I’d say probably a breakfast, like I like a good poached egg. Actually I’ve had a lot of disasters with poached eggs but yeah make it really nice and gooey everywhere, with a bit of avocado. Like a very basic bitch version of toast. A strong, dolls piece of bread, loads of avocado like way too much, maybe a bit of parma ham and an egg.’ 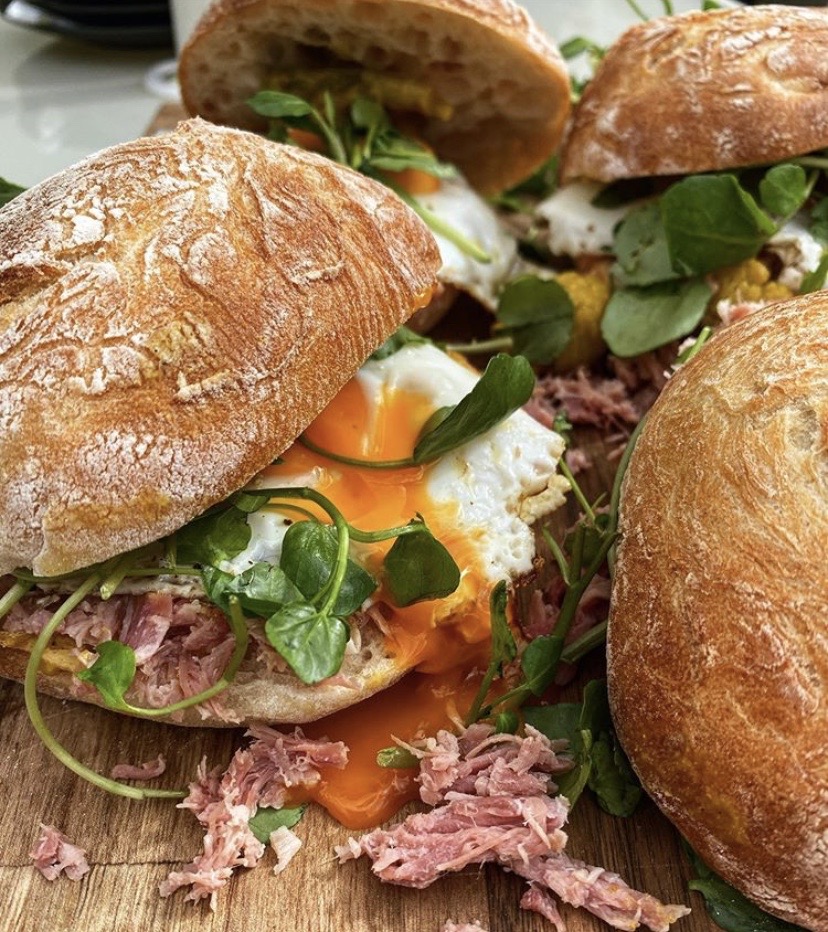 Although social media has become a hub for chefs and foodies to share their meals and recipes, Anna’s Insta videos are a little bit different (they don’t call her Sexy Scottish Scran for nothing). First it started out with risqué, tantalising captions to go with the pictures of food she enjoyed/made, and then as lockdown began Anna decided to up the ante and start turning her captivating captions into saucy videos. ‘It kind of started out as a joke account. So no one knew it was me for like a year. And obviously the captions are quite explicit, I always just found it funny. And then one night I think I was drunk and I posted a picture of myself eating chips of something, and everyone was like OMG. At the time it was mainly people from uni that had been following it. And then over lockdown I got a bit more into it and posting a bit more, and because my face had already been on there I thought I might as well post myself, no real harm in it. I got really bored over lockdown as well’, she laughed. ‘I thought there’s no point in getting really fat over lockdown and having nothing to show for it.’

Although not in Scotland currently, Anna gave us a list of all the food places she’s dying to get back to in Glasgow. ‘Yeah definitely. I feel like that’s where this kind of came about, because I was just forced to do my own cooking. Basically if you went down my page, I’ve been to like every single restaurant possible in Glasgow. But the main one, which I actually went back to when I was last up was Papercup it’s the best brunch ever, I’m such a brunch fiend. It’s this tiny little place near the uni, but it’s really good. And Ox and Finch, they do loads of little tapas plates. I’m actually really bad at sharing, you know when you order something really good. But I suppose it’s good if you don’t order so well because you can just steal some from other people’s plates. Paesano is another really good one in Glasgow, it’s just a pizza place but they come out really quickly. I’m not sure how authentic it is, it’s hard to tell because I feel like people say it’s authentic when they’re all completely different. But it’s very sloppy, like you wouldn’t take a first date there. You do get it all over your face, it’s good though, very good. I feel like they’re the front runners.’ 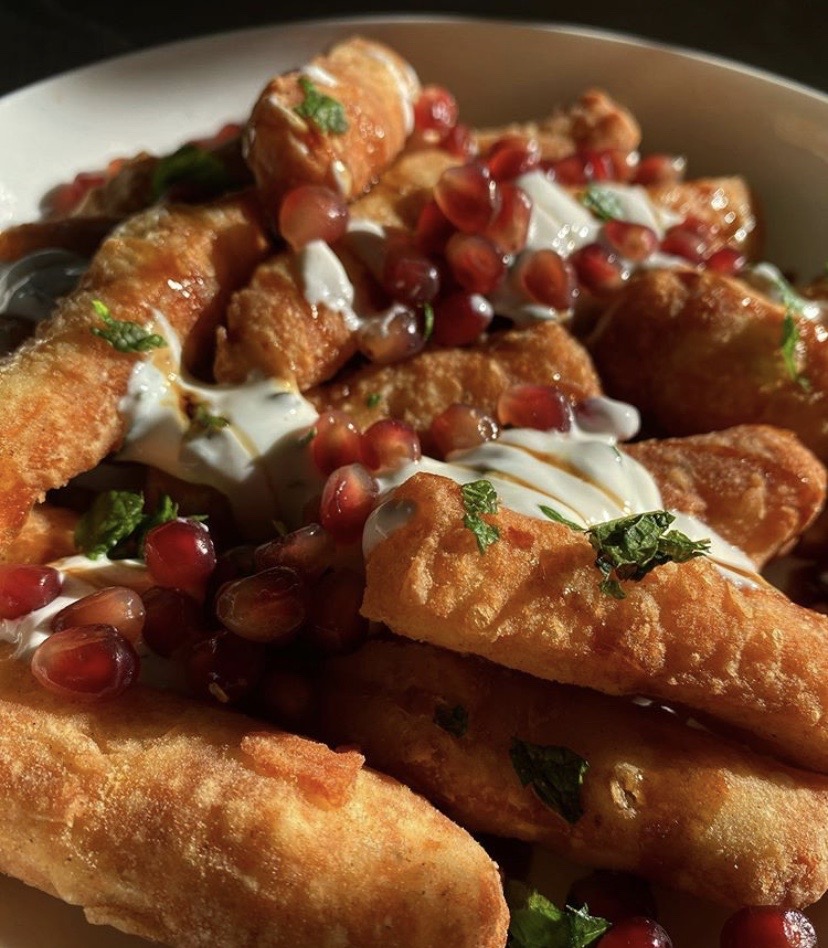 She also told us about her love of Thai food. For both taste and conventional reasons. ‘I’d say probably Thai food, I feel like you just can’t go wrong with it. Also they put so much sugar in it and you don’t even notice but you’re craving more stuff afterwards, like sticky coconut rice. I’ve been to Thai cooking classes but it’s not something I would ever cook myself because I don’t think I could do it justice. And I do kind of like that whole sharing thing too, even though I hate it when people eat my food. It’s like a double-edged sword.’

Anna, much like @whatwillycook (who we interviewed earlier in the year), has become a contributor for MOB kitchen, an online cooking platform. MOB aim to help students and young professionals prepare restaurant-quality meals on a budget. Anna explained to us that while they are helping her in terms of marketing/her videos, rather than continuing to create videos about her own food (or possibly even create a cookbook) she sees her videos going down a different route. ‘I think my things always been a lot more restaurant based. Just going to a lot of other places and seeing how other people cook. And that’s probably where I take a lot of my inspiration from, like if I have something really nice out I’ll go home and try to cook it. I mean I’d love to do that, but I think I’d be more inclined to do something with other people’s cooking. I don’t know how many people would use my sexual recipes. I’m definitely going to be making more videos like that, but I kind of want to get back to the content I was making before, more restaurant-type stuff. Maybe try and incorporate the two together.’

Keep an eye on Anna’s Instagram @sexyscottishscran for all your fun and flirty foodie needs.