June 2020 has been a significant month for a number of different people and communities. Not only did we celebrate Pride month, but we also saw the Black Lives Matter protesters continue to march on all over the world. We got the chance to talk to presenter, activist Sade Giliberti about her experience with the lack of representation of Black LGBTQ+ women in the media whilst she was growing up, mental health, and her thoughts on the BLM protests.

After growing up in South Africa where she was modelling and presenting a children’s TV show at just seven years old, Sade is at home when talking to an audience about subjects close to her heart. Growing up in the tv industry Sade carried on presenting into her twenties, when she also became a mental health advocate.

‘I was very open and honest about my depression, and my struggles with mental health. And this was even before I came out, so I had always spoken a lot about mental health. I ended up partnering up with the South African Anxiety and Depression Group, and doing a lot of TV, magazine and radio interviews. And during every Teen Suicide Prevention week that happens in February I would go to different schools to speak to young children and teachers about raising awareness around mental health.’

After working within the media for such a long time Sade was used to using her voice and platform. So naturally she fell into the roll of activist for both mental health awareness and for the LGBTQ+ community. Like most activists and advocates, Sade explained to us that she has never described herself as ‘an activist’, but rather she is using her platform to try and make a difference, as well as amplifying the voices of people who don’t have their own platform; ‘I obviously have a voice, it’s the presenter in me. So I just naturally fell into that. It’s all just kind of happened and I’ve never seen myself as an activist. I just have a platform so I’m going to use my voice.’

Just before speaking to us, Sade had just finished working on a panel for the Feather Awards Ceremony. In this panel Sade amongst other panellists was invited to talk about queer representations in media, and how society can move forward in creating more accurate and inclusive representations. So we asked Sade to recall some of the LGBTQ+ films, tv shows or books that she believed had really shaped her character growing up, or made her feel comfortable with her identity and sexuality.

‘By the time I was seven I knew I liked girls, possibly more than I liked boys.  And then by the time I was eleven/twelve I had started finding these films and TV shows, in the pubescent part of my life. If you look back to the nineties there were so many LGBTQ+ films that came out that shaped a lot of people’s lives whether you were or you weren’t part of the community of having that dialogue in yourself about your gender or your sexuality.

I remember finding all these films and back then you could tape what was on the TV and keep it. And I remember finding all these shows and films, I don’t even know how I found them, but secretly taping them on VHS and keeping the tapes under my bed. So in moments when I wanted to watch a beautiful love story between to women I would watch it secretly. There were films like ‘Chasing Amy’, which was more of a bisexual film but at the time really impacted me, because you’re still young and you’re trying to come to terms with the feelings inside. You don’t know if you are on the spectrum of ‘do I like girls and boys?’ or ‘do I just like girls?’. So watching a film like ‘Chasing Amy’ people went ‘oh ok it’s normal to like girls and boys, that’s ok’. And there was a show called ‘Bad Girls’ that aired in South Africa and it was about women’s prisons. It had quite a strong lesbian theme to it. And I absolutely loved that show because it wasn’t your typical representation of lesbianism as you get on TV. It was a combination of different types of women. All of these shows and movies I shouldn’t have been watching but I found a way and they helped shape me and made me realise who I was.’

While there is a growing number of LGBTQ+ creatives producing tv shows, films and literature in present day, there have been countless generations before that were forced to grow up with a misrepresentation of different sexualities, races and genders.  With a broader representation of lesbian women only really happening on screen within the last ten years or so, the previous stereotypical image of what a lesbian woman should look and act like was all that the media presented.

I think we’re definitely starting to see it more now without a doubt. There’s so many shows at the moment that are a little bit more inclusive with regards to race and gender and really representing people within the community. So I think now we are seeing a bit more of a representation of the rainbow shall I say. And the fluidity as well within characters, sometimes they’re not one or the other, they just are. So we are definitely seeing more representation. Sometimes I’ll watch a show and think ‘oh that could be me’.

We also asked Sade if she saw social media as having a significant role to play in connecting people within the LGBTQ+ community.

‘Definitely! I mean social media is a giant beast at the moment, and it’s a massive ying and yang. So it’s fantastic that it has created a safe space for people within the community to connect with one another, or to see their icons and people that represent them on a platform where they are sharing life changing content and being authentic rather than trying to mould themselves into what is a heteronormative lifestyle. But at the same time it is a very scary and daunting place for the community because it interconnects us with the rest of the world as well, we don’t just have a gay Instagram, it’s just Instagram. So you’ve got to deal with the love and the hate at the same time.‘ 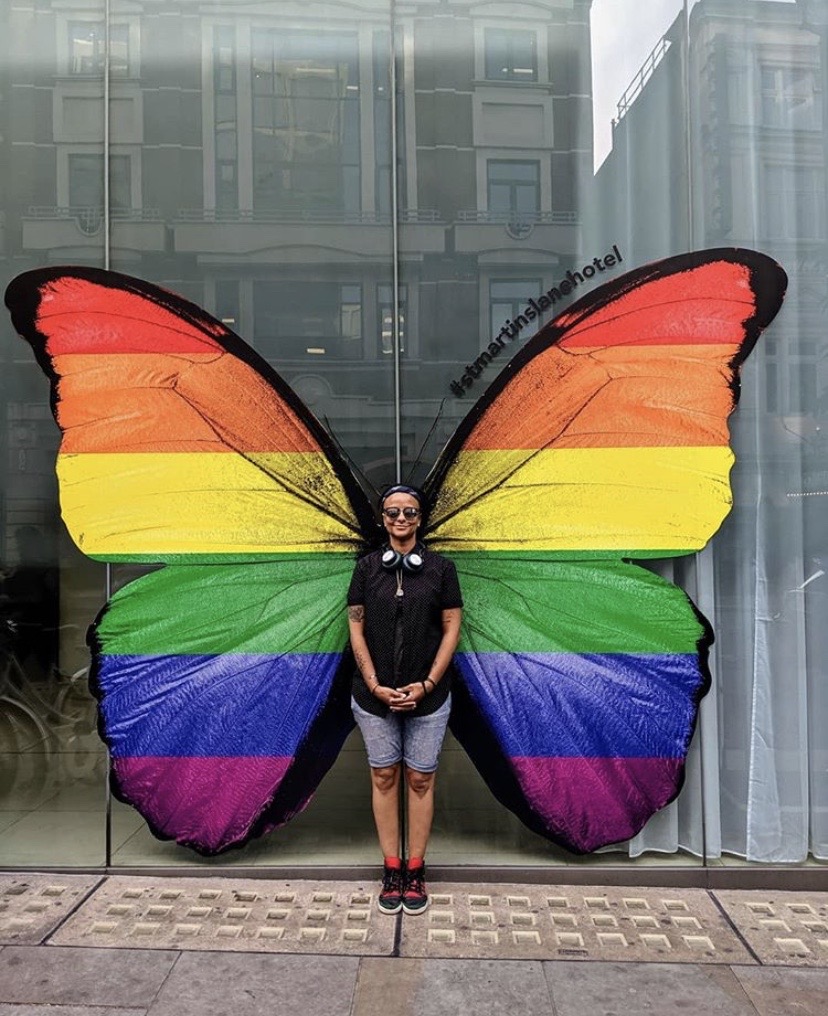 In the wake of George Floyd, many people have taken to social media platforms such as Instagram to spread the word about the Black Lives Matter movement, encourage people to educate themselves and share information. Sade explained to us that she believes that everybody should be using their voice to support the movement, ‘it doesn’t matter how big or small your platform’.

‘It’s not about educating other people, but about people jumping on the bandwagon and educating themselves on the massive gap of inequality. And on the massive issues we’ve been having, I mean it’s now been hundreds of years. So I think if you have a platform and you believe in the movement, use it. A lot of people have been educating themselves but I think it’s because of the shift. This isn’t the first time this has happened, it’s been happening for years. In a public space this has been happening for the past five/six years if we go back to the first incident that happened that was captured on camera that was shared. It’s all been building and with George Floyd everyone’s gone “OK, enough now”.’

With BLM marches and protests continuing all around the world, this is the first time we have seen these continue past a few weeks. Even through a global pandemic, the people of the world have decided that enough is enough and they are going to stand together in the fight for equality. Sade emphasised how important it is that these protests have carried on, which in itself is a first.

‘Not only have we seen the marches continue in America but it’s spread into different countries around the world, it is now a worldly issue its not just an America issue. The systematic issue isn’t just a black and white issue in America, it’s a black and white issue all over the world. I think people are already seeing past the hashtags and the social media posts. If we go back to LGBTQ+ riots, and in the 2000’s especially and maybe in some countries a little earlier, we started to see more equality in respects of same sex marriage being given the green light. That happened because gay people, trans people, lesbians, bi’s for years rioted and protested. They did not stop, and eventually people listened. And now we’re now we’re pushing for other things; this statue must come down, that must change, people mustn’t sing that song. The wheels are really really moving now.