Stella Winter, aka ‘@occasionallyipaint‘ on Instagram, has been taking the social media world by storm with her grand, colourful paintings of friends, family and still life scenes. Taking to TikTok and Instagram to exhibit her work during lockdowns in Germany, Stella’s work went viral over night. Since then she has been able to experience a different side to the art world and it’s digital avenues. We caught up with the artist over Zoom to discuss her viral success, the ever changing art world and the inspiration behind her work. 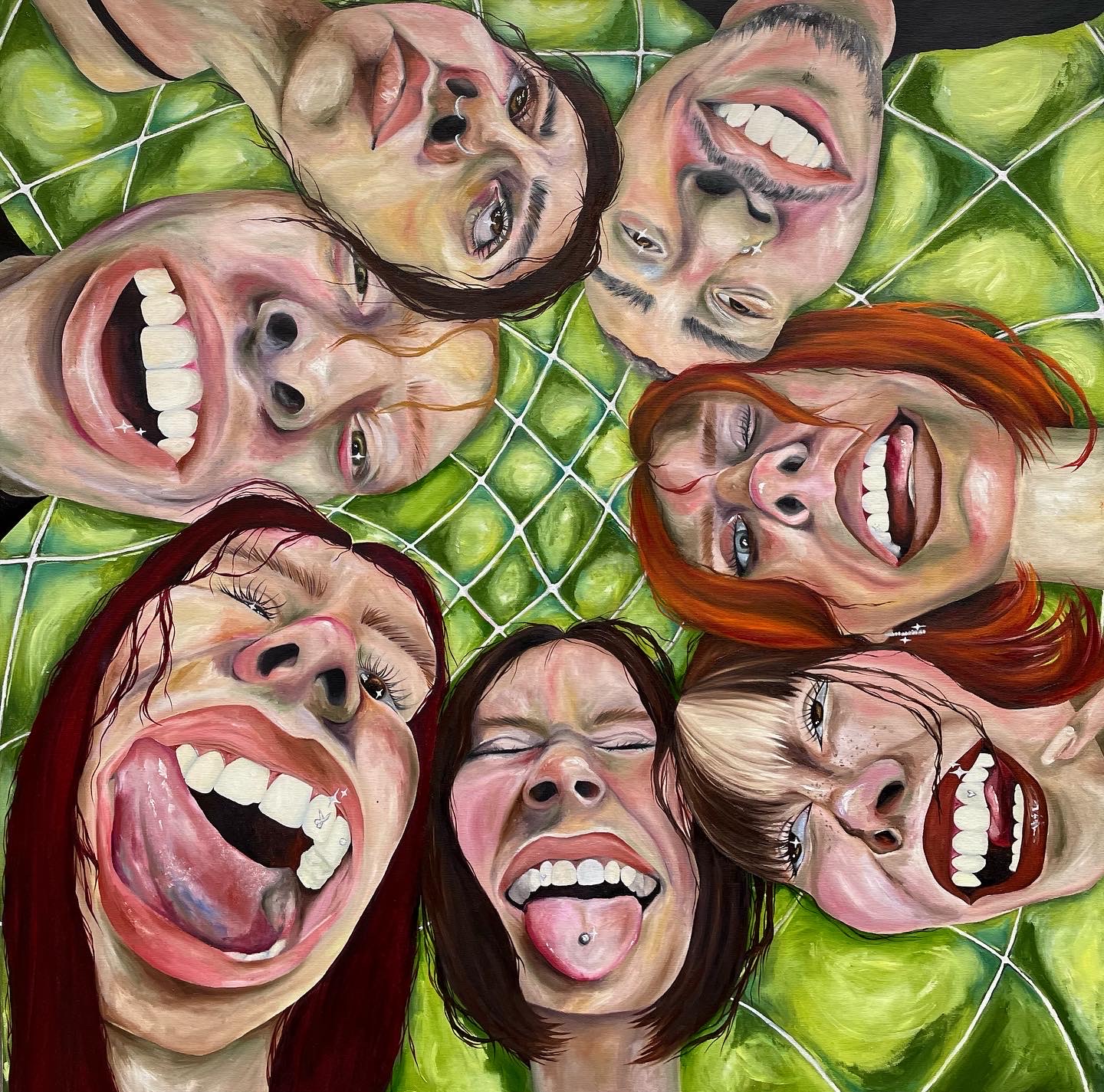 Based near to Frankfurt, Germany, Stella’s life has been based a lot around friends, family and her artwork. She explained to us that while she’s always taken artistic inspiration from what is around her, it wasn’t until the pandemic hit that she really embraced her talent and put her skills to the test.

‘I think it started around the time the pandemic hit. Because that was the time when I really started to paint. Before I didn’t have much time, but I remembered I could do it so got back into it. I definitely didn’t have the same style growing up. I don’t actually remember but I think I was just painting a lot of what others were painting. I mean that’s what you do, everyone starts with copying what they see. And then as I started to paint more, I started with landscapes which is definitely something I don’t do anymore. I got into abstract art,’ she laughed. ‘That was not a good phase for me. And then I started with figurative art, and now I’ve landed where I am now.’

Social media has opened up countless opportunities for artists around the world. Giving them the chance to reach a much wider audience, and make their voice known through their art. While the art world is intrinsically seen as inclusive, it can be incredibly difficult to break into in a physical form. Stella told us a bit more about how her art became so famous so quickly and how she thinks social media is effecting the art world.

‘It happened really quickly. Basically I started doing TikTok’s a little bit, and I had one go viral. It had like a million views and some of those people went over my Instagram. At that time I had around 600 followers which still is a lot I mean I don’t know 600 people right? But that was the end of last year and then I got into reels on Instagram and I think in December I posted one on there that went viral. It basically happened overnight it was crazy.

I just talked to a new gallerist who I’m going to start working with – we’re going to Berlin later this year. And we were talking about the old school networking, because I do social media but I’m really not in the German art spaces. And yes your branding and online persona is important in this age, but you want to show your stuff and do exhibitions. And you can’t do that by just having a lot of followers. So it goes hand in hand. I got a lot of attention through social media, but in the end it’s just networking.’

Stella’s vibrant, exaggerated images usually show images of her loved ones or settings that mean something to her. Zoomed in faces and colourful bottles are brought to life by Stella’s paint brush, and we wanted to know where she believes her inspiration comes from. 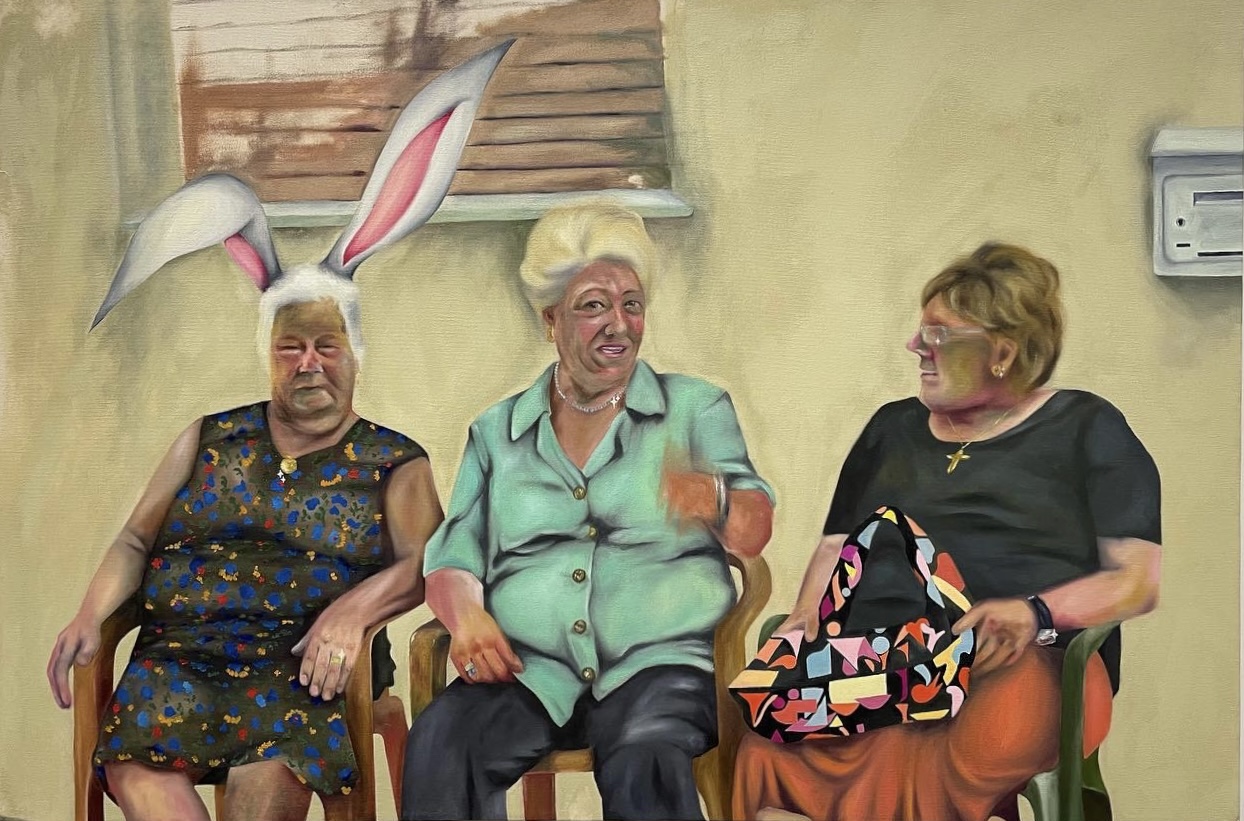 ‘Mainly my friends. Also I have these two paintings that really stand out because they are so different – one’s the Italian house and the three Italian women. In the middle is actually my nonna. So I guess also family, but mainly friends. We always hang out in one spot, three of my friends live there. So the still lives are also based around that spot.’

Finally, with such a distinct artistic flair, we asked Stella when it was that she realised this was the style of art that she wanted to move forward with. She explained that she explored many different techniques and inspirations but found comfort in the natural style that eventually came to her.

‘I had a time where I was really trying to find my art style where I thought I’d have to go down a route of Basquiat – abstract, contemporary sort of space. And now I’m not really looking at other artists because it’s not good for me,’ she laughed. ‘I compare myself and I’ll see something I really like and wish I’d painted it and then I see myself incorporating images into my paintings. So I try not to look at what’s in right now and just do my own thing.’

Head over to Stella’s Instagram page (@occasionallyipaint) to check out more of her amazing artwork.