Returning to our headphones once again is Parisian neo-soul sensation Crystal Murray. Since bursting into our sound waves back in 2019, Crystal has kept up a constant stream of singles, EP’s and musical projects. While she hasn’t been in the music scene for a particularly long time, the young artist’s fan base is staggering, and sound constantly evolving. Weaving tones of R&B and soul in with her distinctly unique voice, Crystal has developed her own instantly recognisable sound. So it’s no surprise that she has shot to fame over the past few years. We got the chance to speak to the flourishing artist about her journey through sound, the explosive Parisian music scene and her upcoming project. 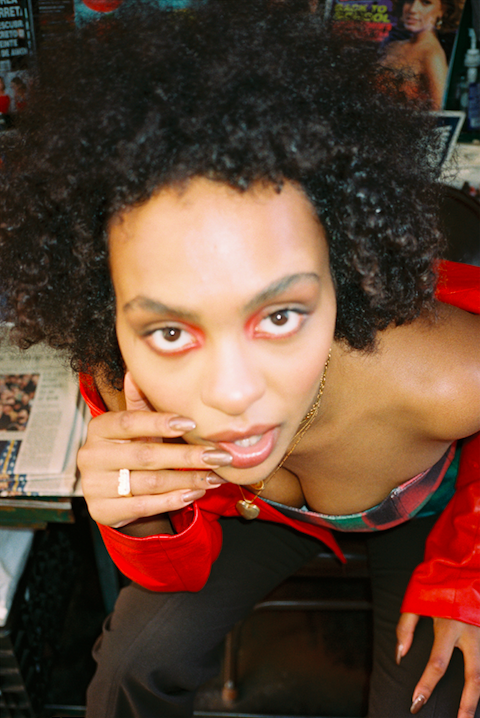 While Crystal is continuing to grow, both within herself and her sound, we wanted to know where it all started. What does Crystal Murray first remember about music whilst growing up. With three turntables placed around her childhood home, it’s no surprise that Crystal developed a love for music so early on. She also went on to explain when exactly it was that she realised she was destined to work within music.

‘My first prominent memory of music in my life is linked with my family. I grew up in a very musical household, my dad is a musicien and my mom works in music too. Music has always been a part of my life, it’s what allowed us to eat. The first song/ album that I recall is my mom putting her very own turntable in her room (even if we already had 2 in the living room) listening to ‘What’s going on?’ by Marvin Gaye – on repeat.’
One day my dad had a big tour with his quartet and the lead singer was Macy Gray. It was the summer and my mom and dad were on tour, so I toured with them the whole time.  Every night I would see Macy Gray perform and my dad leading the quartet – it was just so magical to see. The nonchalance that Macy had on stage and the voice she had, gave me all the strength through my childhood to get excited about being an artist when I got older.’
In many ways, the last year and a half has been tough. Creatively, it has created many problems and blocked a lot of inspiration. It is for this reason that many artists have struggled to continue with their passions over lockdown. However, while Crystal explained to us that this has obviously not been the easiest time for herself and other creatives alike, she has taken away some sort of positive from this strange experience.
‘I find it kinda hard to find inspiration when your in the same place. You can’t travel, meet new people, etc.. but staying positive is the best way to stay healthy. I had more time to create and take the time for some little details, that I didn’t have the time or energy to do before. That’s valuable.’
Parisian culture has always been rich with emotions and unique experiences. And while French music has always been popular around the world, the recent emergence of artists like Crystal are pushing the Parisian music scene to an even higher podium in the industry. Crystal explained to us how she thinks her home city has influenced her sound, and her opinions on the cities ever developing music scene.
‘I think the fact that Paris has been very open to so many different types of music, people, ways of thinking, and more. At some point I feel like France was a bit late on many things and ways of thinking; but today I can see a generation full of hope, and wanting to change mentalities. Growing up in Paris is fulfilling really.
French people are starting to own their sound. The niche of today is becoming the mainstream of tomorrow and people of colour are really at the forefront, and people are starting to respect them and understand a multitude of sounds. The fact that we owning our sound is making it impossible to ignore us. We are owning our evolution.’
Genre as we know it is changing. Artists are becoming braver in stepping out of these typical constraints, and have decided to take from many different genres to create their own. From neo-soul to surf-funk, the list of genre combinations today are endless. So instead of reducing Crystals layered music to just one category, we asked her to explain her music in broader terms.
‘AWHOLELOTOFEMOTIONS. I love that you say that genre is becoming obsolete – I spent the whole year trying to explain that to people! I now like to place mu music by emotions, what I think actually makes sense in each sound and moment.’
When asked where her inspiration comes from, Crystal replied; ‘My life. The life around me. The people I fall in love with. The things I hate. The things I cherish. Everything you can think about, an emotion can be put into words, colors, feeling – but everything can  link together.’ So it is no surprise at all that there seems to be another project on the horizon. Crystal gave us a bit more insight into how she has felt working on a new project and how she has developed as both an artist and a person while creating it. (Also check out Crystal performing her latest release ‘BOSS’ for Colors below!).
‘I twisted my foundations essentially. I took what I knew and dispatched that into things I didn’t know – like alternative rock, electronic, UK garage, and just sonics that you can listen to without lyrics. I really worked on the production of every single instrumental, then worked on the melodies and lyrics. My next project can’t be put in a box, but you will be able to box the tracks up in emotional boxes! I think people are gonna be a little bit surprised if the only song they listened is ‘Princess’: but if you followed the evolution of Crystal, I think it makes sense. I’m actually very proud of what’s to come as I can see an evolution from the first project – and that’s personal growth as well as in my music.’
To round off the interview, we wanted to know what the future looks like for Crystal and her music. While we wait on the edge of our seats for to listen to the upcoming project in it’s entirety (come on September) Crystal left us knowing that there is a lot more on her musical horizon.
‘Evolution. I want to be on the move, keep moving my inspiration, and not stay in my comfort zone. I want to see everything I can do.’
Make sure you check out more of Crystal Murray’s genre-blending tunes over on her Spotify page!
Sophie Wyatt2021-06-17T19:19:57+00:00