Navigating a gendered world from A to Z

Have you ever thought about what’s gendered about the sinks you’ve had many 20-second-rendezvous with in the last year? Or Google Maps, as you try to maneuver your way through the city? What about Wikipedia? Alina and Tess, founders of the first ever feminist encyclopedia, are here to shine a light on all things gendered – which perhaps unsurprisingly seems to be, well, everything.

Tess and Alina became friends during their undergraduate studies in a programme called politics, psychology, law, and economics (PPLE) at the University of Amsterdam, which takes a critical look at existing knowledge, they tell me. The idea for their project which launched this March was triggered in response to the growing political apathy they witnessed around them and a desire to make use of ideas that aren’t always as welcome in a university setting.

‘We had this conversation one year after we finished up, when the Black Lives Matter movement was really big. We noticed attempts at placing racial equality outside of politics, by stating these were simply matters of basic morality, which is often said about gender equality and human rights. Although we agree, we discussed whether it’s possible and helpful to depoliticise racial and gender equality in this way. To us, all aspects of human affairs involve politics, because they involve decision-making and often unequal power relations. This makes everything political. Instead, we want to stress what is already political about everyday things and experiences, and in this way, encourage change.‘ Alina tells me over Zoom, a space that we have not only occupied so much that we’re slowly reduced to 1s and 0s, but which is also – you guessed it – gendered.

‘So we were discussing what it would be like if we saw everything as political, you know: The sidewalk and this door, those kind of things, and if we see politics from a feminist perspective, how far can we stretch that idea?‘ 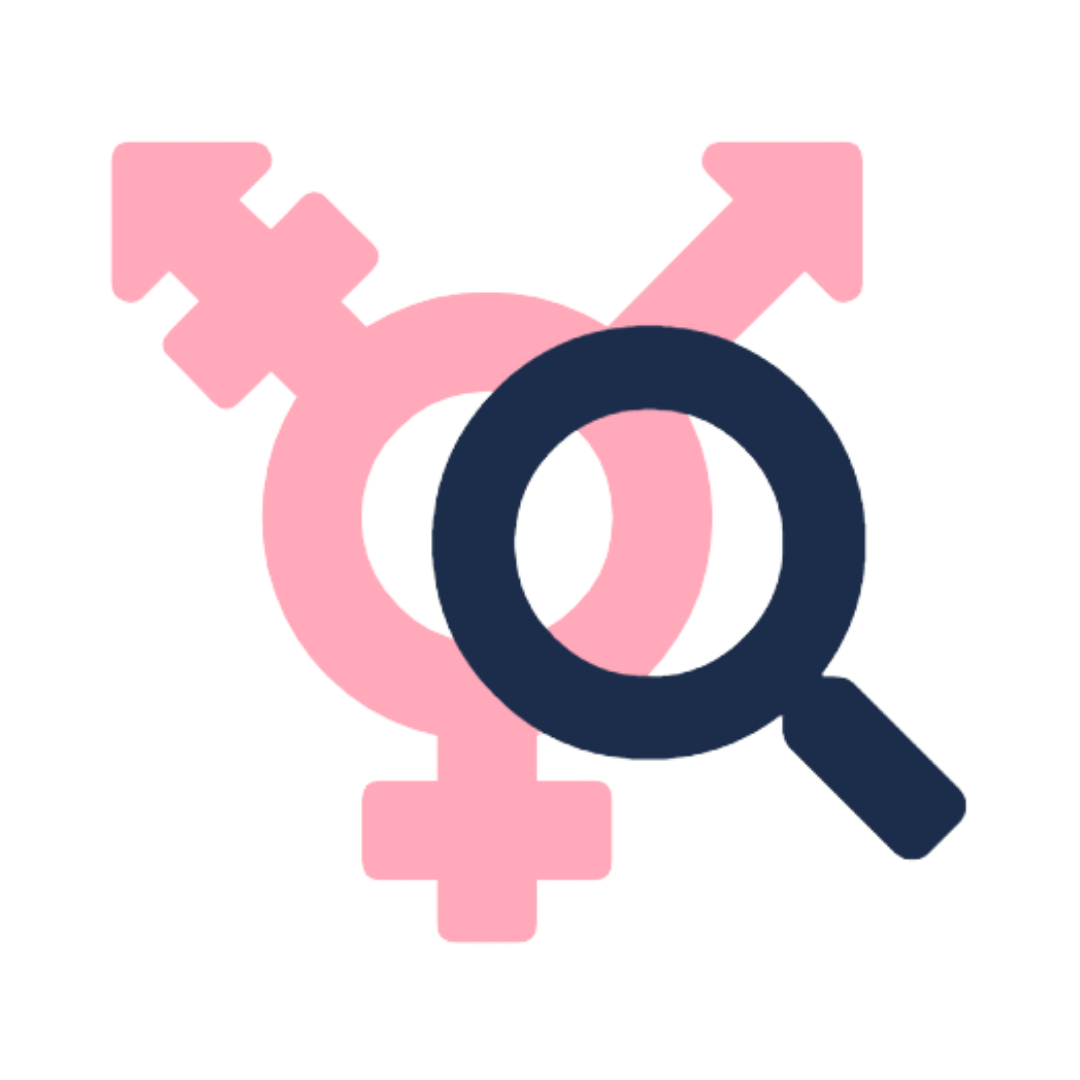 After some reflections, they came up with the idea to communicate these thoughts through an encyclopedia in which concepts can be broken down from A to Z, deconstructing one term at a time. This is Gendered takes a systemic look at how deeply interwoven gender is in our surroundings, something that is becoming more visible as books like the notorious Invisible Women by Caroline Criado-Perez and Cordelia Fine’s Delusions of Gender helped put examples out into the mainstream. But gender is also deeply entrenched in public spaces, Tess tells me while holding up a copy of ‘Discrimination by Design’ by Leslie Weisman, as well as in policymaking, with gendermainstreaming becoming more widely adopted in organisations like the UN. Campaigners are also trying to include feminism in foreign policy, Alina explains as she tells me she’s been particularly interested in the work of Centre for Feminist Foreign Policy.

As fantastic as it is to see these areas receive more recognition, Tess and Alina also acknowledge that feminism is facing a growing number of countermovements trying to discredit feminist activism. We see outcries of #NotAllMen after virtually every instance of sexual violence that’s aired in the media, like after the tragic murder of Sarah Everard, with even police officer Cressida Dick saying it is “incredibly rare” for women to be abducted in London – a statement that’s not particularly reassuring when reports repeatedly show us how ubiquitous sexual and gender-based violence and harassment is. It’s challenging to say the least to grow an encyclopedia about gender-based harm when people don’t even agree on the problem in the first place.

‘That kind of hurts, you know, when they don’t pay attention when you talk about rape culture but they do when we talk about technology they had taken for granted. But for some reason, the voice recognition tool really hits home to men, and you know, it sucks. But then once you know, you can try to take advantage of that,’ Alina tells me.

In the case of Google Maps, it might not occur to cis men that people of intersecting marginalised identities are forced to make safety evaluations so they don’t risk being harassed or even face violence on their way home. When Google Maps disregards this safety precaution, it can easily lead users through a dark alley or along the highway, they point out in their encyclopedia entry. Luckily, after this concern was raised with Google, they are now working on a lighting layer feature to indicate what streets are for example well lit and safer to use. But the feature is still in its developmental phase and is only treating a symptom instead of the root cause of gender-based violence. There is still a long way to go.

‘We founded This is Gendered because we do believe that for it to be more effective it should be able to recognise that gender is so present in everything, basically. I think that once you start to see it more and more, I personally believe that that’s one way of becoming engaged,’ Alina tells me.

Making the project more accessible to everyone doesn’t mean taking away important issues that need to be addressed. Alina and Tess strategically use concrete examples that illustrate how sexism, racism and patriarchy are part of our everyday lives and objects, to give people who are new to feminist ideas an entryway into the field by making them more tangible.

‘Something that you sometimes notice in the entries is that we start out from a point where as many people as possible can recognise themselves, whether that is, you know, a TV series, or whether that is just a common experience that all humans have,’ Alina explains.

‘And then we get into the details eventually. And most likely towards the end, that’s where you really get that this is a patriarchal system. So to make sure that people can follow that, we don’t start out with those more difficult pieces.’

When Tess and Alina aren’t researching and writing entries for This is Gendered, Tess is busy studying Health, Medicine and Society, while Alina is focusing on International Relations and Diplomacy. Sometimes they’re able to combine their studies by shining a light on the gendered aspects of each discipline, allowing them to widen their perspective further. However, as much as inclusivity and intersectionality are core principles of the project, they acknowledge that it’s not only challenging but impossible to get everything right one hundred per cent of the time for as long as their team only consists of two white, cis-gendered women, not only because of practical limitations, but also because this means they lack the experiential knowledge to make the project truly inclusive and representative.

‘For instance, we had all heard about ADHD, and I was going to write about autism already. To me, that feels a bit odd. I wish that I would have asked someone, but at the same time, you also don’t want to ask for labour by people based on parts of their marginalised identity. So I think that balance is, of course, tricky to find. I mean, what we can say is we try our best. And we’re also very open to admitting where our blind spots are if other people notice them.’

Alina and Tess hope that This is Gendered can be a tool that allows people to become more fluent in expressing how the world around us is gendered and the harm that it causes. In its best form, it bridges the gap between those who currently lack the linguistic tools to express these problems confidently and those who run the risk of alienating others through academic language. Although Tess and Alina attend two different Master programs, they have both encountered moments in which people struggled to explore issues openly and honestly.

‘I study in quite critical environments, and we’ve had discussions in class where people really went silent because they didn’t dare to speak anymore, because they felt they might offend someone,’ Tess explains.

‘And I aim to give people the language to talk about oppression in a way that is sensitive to other people. We ourselves have struggled finding a way to write an agenda in an inclusive way. And actually, we are still struggling with that. I think it’s so important to normalise that and to make people become fluent in these terms, so that these issues can be addressed, rather than going blank. We need to actively find tools in the language to have these conversations.’

As with any social justice projects, the ultimate goal is to make sure there will one day be no need for an encyclopedia that points out the systemic harm many are forced to deal with every day. Until then, This is Gendered is calling out for contributions to make sure the project can rely on a community that encompasses as many aspects of our gendered world as possible, with a print edition lurking on the horizon after reaching 500 entries or so.

‘We are very aware that you cannot as an individual, however hard you try, and also not as two people, reflect all experiences and perspectives,’ Tess tells me as we’re reaching our time limit on Zoom.

‘We are inherently flawed,’ she says. ‘That doesn’t mean that we aren’t trying.’