Meet self-taught, South London music producer, Mom Tudie. At 23 he has emerged with his own combination of genres, which he describes as ‘DIY Jazz R&B‘, to create effortlessly charming tunes. After the release of the latest edit of his song Heavey, which was produced in his front room, we got the chance to ask him a couple of questions about his music, collaborations and what his future plans are, other than selling cacti on Oxford street.

With such a broad knowledge of music as well as being a talented musician, Mom Tudie explained to us the first time he really felt inspired by a piece of music;

‘My mate showed me Christian Scott’s cover of Thom Yorke’s ‘the eraser’ at the back of our music class. It’s a crazy track, and was a lot funnier to listen to than Beethoven’s plagal cadences over and over again. That song influenced the first track I properly made, a huge amount. I stole the whole chord progression.’

Being within a vastly musically talented friendship group, Tudie decided to put out a ‘Front-Room Edit‘ of his song Heavey (which is pretty self-explanatory but if you need more explaining watch the video for it here: https://www.youtube.com/watch?v=xg96-oLaGt0&feature=youtu.be).

‘I wanted to show a different side to my sound. I came from playing and watching music live, and then that morphed into production later on. So I kind of wanted to go back to basics and get that live sound. It was also a good excuse to have a jam with a load of wicked players, and bring some friends together that I thought should meet each other.‘

Mom Tudie has continued, over the past few months to work with a number of different, and equally up-and-coming artists and producers, including, Blake, Sophie Faith and Tom Misch.

‘If people are good at playing their instrument, I’d love to work with them. Whether it be vocals, piano, bass, guitar or anything else. Tom is an incredible guitarist, its always a blessing to see him do his thing, and to get to work with him was amazing. If Drake fancies a session in my loft, please do let him know though. I have a few slots available so I’m happy to talk dates. My manager’s email should be attached somewhere around here.‘ 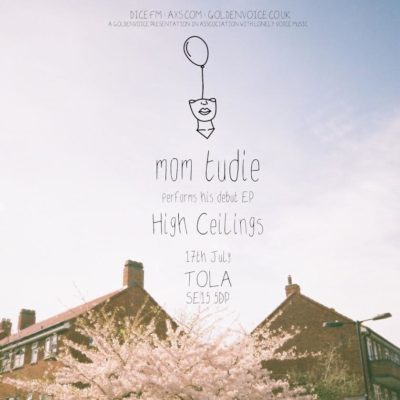 After releasing an EP and several other songs in 2019, Mom Tudie is set to have an exciting 2020. He has recently released a video series on Youtube, collaborating with three artists to produce three minute-long songs, and plans to carry on with his passion for music in the future.
‘I hope I can do music full time at some point, so I don’t have to sell cacti on oxford street for the rest of my life. But I’m having fun now anyway. I’d also love to have my own studio and not have to steal all my dad’s toys. I’m worried he might chuck them all out the pram.’
Have a listen to the first of Mom Tudie’s video series featuring Sophie Faith here: https://www.youtube.com/watch?v=iSEfxU-0UAQ
Sophie Wyatt2020-05-04T14:12:53+00:00