We got the chance to sit down and have a chat with new alternative trio, Doghouse Outhouse, to find out a bit more about their sound, DOGHOUSE studios and where they see the group in six years.

Doghouse Outhouse, formed in 2017 by three friends, have a raw sound mixed with funky guitar and chilled baselines, creating a unique collaboration of genres. So we asked the band to define their sound.

M – ‘I would describe our sound as jazz influenced indie pop. Like we’d love to make jazz, but we’re not good enough and also we like to make people dance so you gotta groove sometimes. Melodic groove music? Yeah harmonic groove-pop‘.

J – ‘I’d agree with that. I think the fact that none of us are quite sure how to describe our sound says a lot about how we’ve approached making music together – we’ve just grooved and then shaped what comes out afterwards. It’s fun and raw, but we’re getting closer to figuring it out. I said in an interview before that I want us to sound like the moment just before you die on CoD, where your vision blurs in greyscale and matey’s pulse booms louder than all the background war noise. It’s kinda bullshit, but we like it‘.

L – ‘I think a lot of the time it depends what mood we are in. We can alter a song to have a completely different sound, so like to play around with it. If we were to write a song straight after watching the film Whiplash it would probably have a drum solo. We do what we feel in the moment, which makes it hard to have a categorical sound, but we don’t mind‘.

The lyrics that accompany their zany, mellow beats are simple and relatable to everyday life. Songs like ‘Cool Million’, reflect the bands’ lives, with highs, lows and everything in-between.

J – ‘I try to write about my thought processes, but I haven’t quite come to grips with how and why I think the way I do. For the most part I reflect on the tunes as nihilistic musings, but I hope whoever else listens to, or thinks about our music doesn’t feel they have to see me in the songs as I much as I do. Lyrics are the closest I get to an explanation of how and why I live the way I do, but I can’t write Doghouse tunes very regularly or else I’d spend every day wandering around my own head even more than now, and thats not good for anyone’.

M – ‘I write chords and drums and shit from my experience of what sounds good. Jackson writes from experience so much that sometimes I don’t ask him questions, I just read the lyrics. If you wanted a cup of tea you’d probably put in a song I want a cup of tea’. 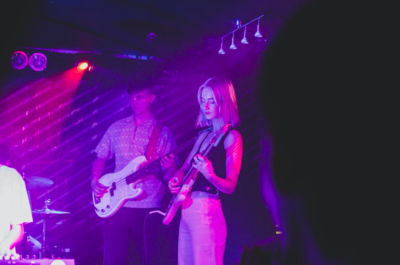 We also asked the band the story behind their wacky and intriguing name, but were left with a very ominous answer…

J – ‘Just after I’d got in the sea with my clothes on, we saw a very small man with a porcelain kennel atop his head. That’s all you’re getting‘.

After starting to produce their music only three years ago, the band are still in the process of starting up and have big plans for the future; including their own studios.

J –  ‘I’d love for us to just be starting to write a project after a hiatus. Playing tunes with these lot is my favourite thing to do, but we all share similar philosophies of collaboration and exploration. We can’t truly create an identity for ourselves as a band without filtration, and therefore concentration, of ideas, but we can’t be true to ourselves as musicians without exploring and following what we want to create. There are going to be periods where we are all making tunes with other people, but that won’t mean the death of Doghouse Outhouse, it’ll mean the Doghouse sound will become more and more our own‘.

M – ‘Ideally, in six years we’ll have DOGHOUSE studios in somewhere like Bristol, recording people, playing and touring when we can. I’d love to get into real studio work or session work. Ideally through DOGHOUSE studios, we’ll be recording and playing with some mad artists, big collabs and stuff. All very cool‘.

The group’s newest single ‘Still on my Brain’ is on Spoitfy for you to listen to now, or give some of their live stuff a listen to at https://www.youtube.com/watch?v=egz0tLCnnR0