Brimming with soothing melodies, warming hooks and relatable lyrics, the voice of flourishing artist Maya Delilah is set to be the soundtrack of your 2021. Learning guitar from a young age and quickly realising her love and talent for music, Maya has gone on to refine her craft into an instantly recognisable tone. Not only will her funky tunes instantly get your head bobbing, but her colourful personality that weaves it’s way into her lyrics and music videos will warm your heart. We got to chat to the singer-songwriter about how she’s dealt with being an emerging artist during the pandemic, ‘DIY’ music videos and the story behind her single ‘Tangerine Dreams‘. 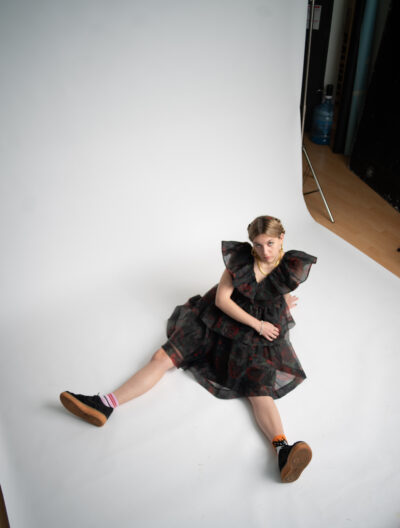 Although Maya told us that she is currently listening to a lot of Anderson Paak, Loyle Carner and Volfpeck, her family home was full of a vast range of music growing up. Starting to learn guitar from the age of eight, it wasn’t long before she was ready to start making some music herself. She explained to us what lead her to pick up her first guitar, and the kind of music that she was introduced by her parents whilst growing up.

‘My parents would always play very versatile music around the house. A lot of latin music, a lot of the old classics as well like Stevie and Aretha Franklin and Paul Simon. Paul Simon was the first gig I went to. Yeah a very eclectic mix. A lot of East African music as well, so yeah a really broad spectrum of music. Always really jolly music. And then my sister started learning guitar and I thought ‘that’s so cool, I’m so jealous’. I loved music obviously because we had music on in the house all the time, so I thought I’ll just try this out. I’d been playing piano for a bit and it had just really not been going into my head, I just didn’t understand it and it really frustrated me. So when I saw my sister playing guitar, I thought ‘OK maybe I could do that instead’. Because I had been learning the piano in a very traditional way of like scales and grade books, and because I’m also super dyslexic it just did not work for me. So when I started guitar I knew the same thing was going happen if I learnt in this way, so I just said to my teacher can I just learn a song that you play or that I hear in the week. And then I just never stopped since then.‘

After realising her love for guitar, it wasn’t until much later that Maya realised that she wanted to turn her hobby into a career. Now a Brits School graduate, Maya let us in on how she started to refine the idea of being her own artist after joining the London session circuit.

‘I think I saw it more as a hobby. As I was going through school I got really into dance and thought I was going to take that path. I always thought it would be really cool to be a musician, but I didn’t even consider being my own artist until like three years ago. So when I stopped doing so much dance I thought what can I do now, and I’m not very academic so it had to be something creative and I was already quite good at guitar. Then my parents asked ‘why don’t you audition for Brits School’. So I got in and kind of put all my eggs in one basket. I properly started writing songs about two years ago. I was in the session circuit for a while. Such a super London thing, it’s like speed dating with producers and you get put into so many different sessions.‘

Following the global pandemic and lockdowns around the world, creatives have been forced to turn to social media and streaming platforms to not only share their work but also keep connected to their audience. While the pressure has been applied to not only continue creating music and ‘be as productive as possible during a world wide pandemic’, creatives now have the added pressure of keeping up a constant stream of online content. We asked Maya how she’s dealt with these new pressures, and if as an emerging artist in the current climate she has felt any advantages at all. 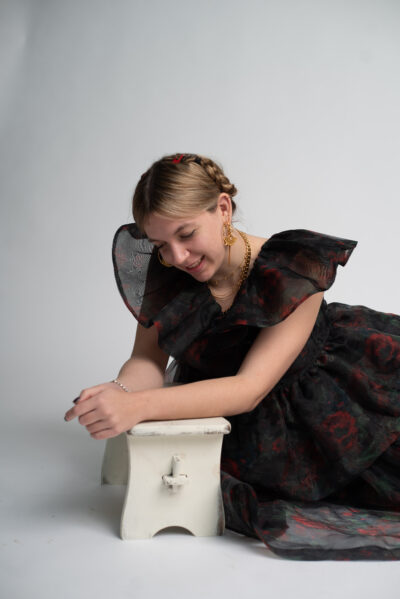 ‘There has been a lot of pressure, but I’ve also found that it’s really boosted my work ethic. Like the amount of work that I’ve got done during this whole Corona time compared to before is quite crazy to me. I’m someone that doesn’t like to sit still, like I’m quite bad at sitting and watching a show. I feel kind of guilty when I’m not being productive. So it’s been a challenge because all I can do is make content, so that’s driven me a bit insane because it’s the same thing over and over again. But I do enjoy it and I’ve found ways to have fun with it now, not that I didn’t before but the pressure does build and I’ve had some breaking points’, she laughed. ‘But I’ve kind of found an advantage in that I’ve taken this time to try and build a following so that when we come out of this I’ll have a bigger audience to perform to, and a bigger platform to share my music with. And the best way to do that in this day and age is to build your social media.‘

Although it may be surprising to most, almost every artist has a unique song writing process. From creating a song all at once, doing it bit by bit, to songs coming to them in dreams, each musician has their own way of pulling a song out of them. Maya told us that she has recently discovered a certain confidence in writing lyrics, but it was not always so easy.

‘Well I did in the first half, because I am a session writer and find it really hard to write by myself at home. I’m really lucky that I have one soul producer who is also my best friend, so I find it very easy to write with him. So I have fallen into a bit of a comfort zone of only being able to write when I’m with him in that environment, so that was challenging. But I’ve just had a break-up, so my whole next EP is about that. So had quite a lot to write about, which is kind of good like if that didn’t happen I would have no material. I actually kind of have more to write about than I ever have before‘, she laughed. ‘I’m actually finding song writing a lot more fun now. I’ve kind of found a style of writing that I find easiest, which is like not taking it too seriously and having fun with the lyrics. Incredibly deep metaphors are just not my vibe. I think as soon as I figured that out it became a lot easier.‘

After such a short time releasing tracks, Maya has already grown a huge and loyal following. Since releasing her first songs at the beginning of 2020, she has gone on to release several other singles and an EP. Her most streamed song ‘Tangerine Dream‘ takes you on a lucid journey of finding someone that will always catch you, even when you fall asleep. The track, with Maya’s soothing voice and killer guitar solos, will transport you straight back to chilled summer evenings (pre-pandemic of course). We asked Maya to give us a bit of insight into how this tune came about.

‘So my producer Stephen and I are two people that will hear something on a TV show or read a phrase and then think it could be a lyric idea. We have so many random sentences and words on our notes. And he was like ‘I heard this cool phrase ‘Tangerine Dream’ that could work’, and I was like ‘yeah let’s do it’. I always had this phrase when I liked someone I would call them ‘sunshine boy’ if I didn’t want to say who it was or something, God that’s so cringe‘, she laughed. ‘So I thought maybe Tangerine Dream could be a version of that. And then it just happened so quickly. We have this rule, because I find it hard to write the lyrics but love making the backing track of it, once we find chords I’m not allowed to touch the guitars or production until the song is fully written. Otherwise I’ll just go off on a complete tangent.‘

Like many other creatives, Maya has had to improvise over the past year. With live gigs becoming a thing of the past (for now, we pray) and big production music videos being put on hold, Maya has decided to take matters into her own hands. Armed with colourful dresses, a green screen and her dad’s iPhone, Maya was able to produce a ‘DIY’ music video for her single ‘I’m Just Stupid‘, that only parallels her vibrant style and sound.

‘So we did three videos for the whole EP, and it was tricky because the last two were done in lockdown. And it was like proper lockdown when we did the ‘I’m Just Stupid’ video, so that was filmed by my dad on his iPhone and then completely edited by my manager. We had 0 budget, and I get super inspired by other artists and I’d seen Hobo Johnson’s video for Uglykid where it has a similar green screen idea. So I thought this would be a really cool, low-budget thing to do, and my manager Ryan is super good at editing. For the next EP we have a tiny bit more of a budget, but I still love to do it DIY and try and make it as fun and different as possible.‘

While the future is still almost impossible to plan for, artists are focusing on continuing to create more music to sooth everyone’s lockdown a little bit. Maya told us that while live gigs are still out of the question, she is excited to release her latest project within the next few months.

‘All I can say is that it should be coming out soon. Definitely within the next few months, it’s coming out as singles not all in one go. We’re just trying to plan the music videos during lockdown, which is quite hard. I’m also designing a new set of plectrums. For the last EP I designed and released five plectrums, so just going to do a little merch package as well.‘

To keep up to date with Maya’s online content (including some more killer guitar solos) head over to her Instagram page, and check out her Spotify page for more of her soothing tunes!