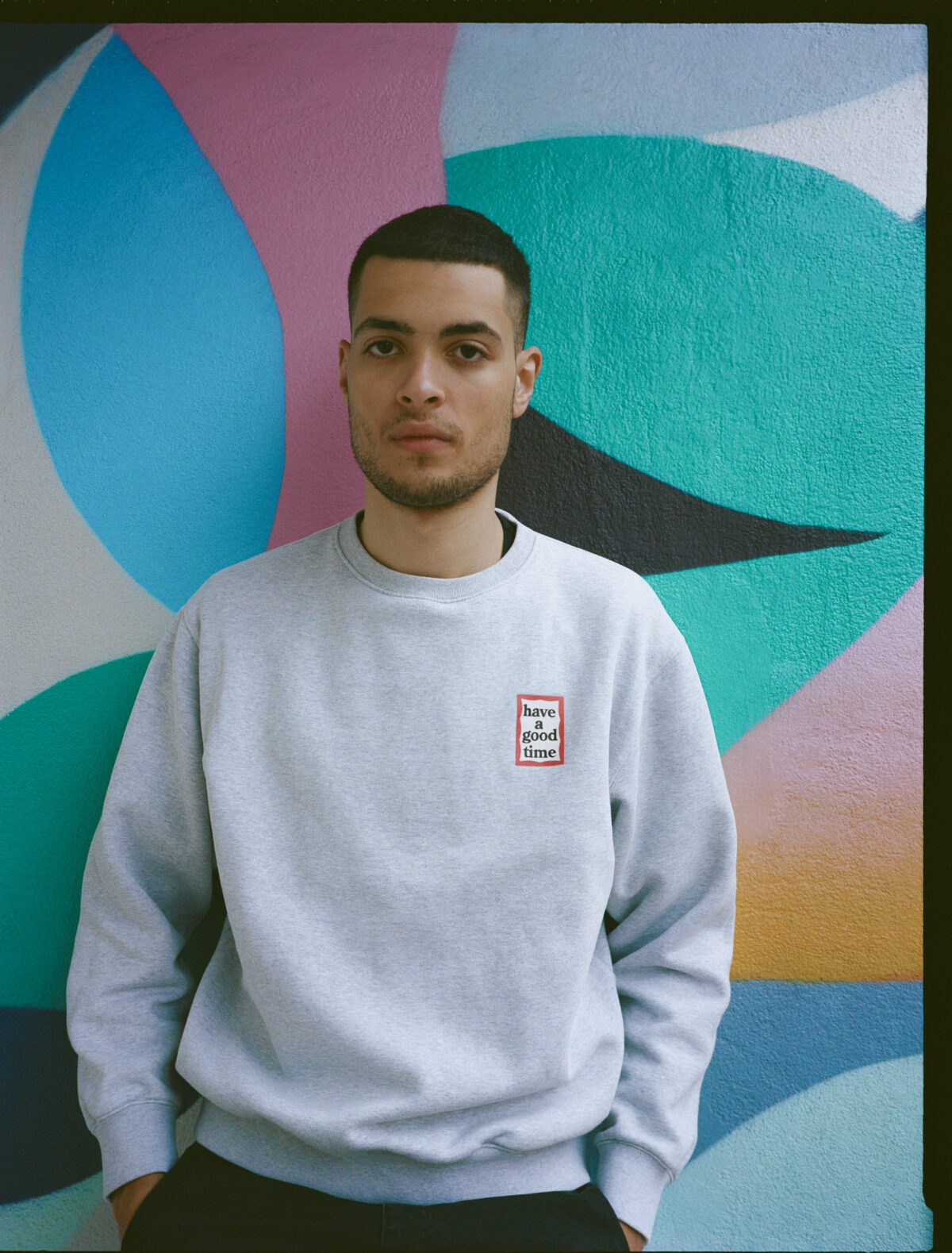 London based musician and producer Luke Gomm has already made quite the name for himself in the music industry. At just 23 years old, the budding artist has already worked with the likes of Lily Allen, Pip Millett and Miraa May to name a few. He is now starting to turn his hand to creating his own unique tunes. Since releasing his debut track ‘I’m Thru‘ in 2020, he has continued to grow his discography, and in turn his fan base. We spoke to the talented musician about his life-changing encounter with Nile Rodgers, his new track ‘Red Flashing Lights‘ and the future of his genre-blending music.

With such a unique sound, layered with different influences, it’s no surprise that Luke grew up surrounded by different genres. He took a trip down memory lane as he explained to us his first prominent memories of music growing up.
‘My first memories of music are from family gatherings and listening to music on the hifi at home & the car rides with CD’s. My mum listened to a lot of soul, some dance & classic pop albums. My Dad listened to Ska music & reggae. I remember taking guitar lessons for a while when I was 7 or 8, around the same time in primary school my year 3 teacher used to play the piano all day. When I was 13 I wrote my first song after being passed down a Casio keyboard. I was listening to a lot of music off an iPod filled with my uncles iTunes library & other music I’d been discovering at the time. From then on me and my brother began to collaborate, I’d create music while he was exploring visuals.’
While Luke was still developing in both himself and his style, he was faced with a once in a lifetime opportunity. The legendary Nile Rodgers and prominent British group Rudimental were searching for young producers and musicians to recreate a version of classic track ‘Le Freak‘. It was at the moment of applying that Luke’s life changed forever.
‘You had to be 18 to get considered but at the time I was 17 so I said I was born a year earlier and sent in my demos. It was amazing to get chosen by Nile for that opportunity and it was my first time in a major recording studio. It’s been a blessing since then to remain inspired by Nile and his keys player Russell, I usually go to the CHIC gigs once or twice a year and we talk about music & what’s going on.’
Although Luke is relatively new to the scene in his own right, he has been working on projects with artists from Lily Allen to J Cole, Miraa May to Sampha. While he has developed this eclectic collection of big name collaborations, we wanted to know what it was that made Luke want to start creating music for himself.
‘I’ve felt compelled to create music since I got that Casio keyboard when I was 13. At school we formed a scene of artists & bands where we’d upload our recordings & play gigs at the weekend. On finishing school I spent a few years at RAK & Strongroom studios learning from the greats, following which I spent a few years focused on producing for others. All of these experiences shaped me as an individual before I inevitably started releasing my own jams again. Making music is something that I love to do, so whether it’s for myself or others there’s always a project on the go – this is just the beginning‘
From breaking into the music industry at such a young age, and diving head first into the work, Luke has already packed a lengthy music career into a handful of years. With the opportunity to gain a wealth of knowledge in his time working with music, we asked Luke, if he could go back and give his younger self advice, what would he say?
‘If I went back in time and gave advice to a younger me I’d just say to stay focused, share ideas, study, make mistakes, create more, collaborate more, live, love, turn up.‘ 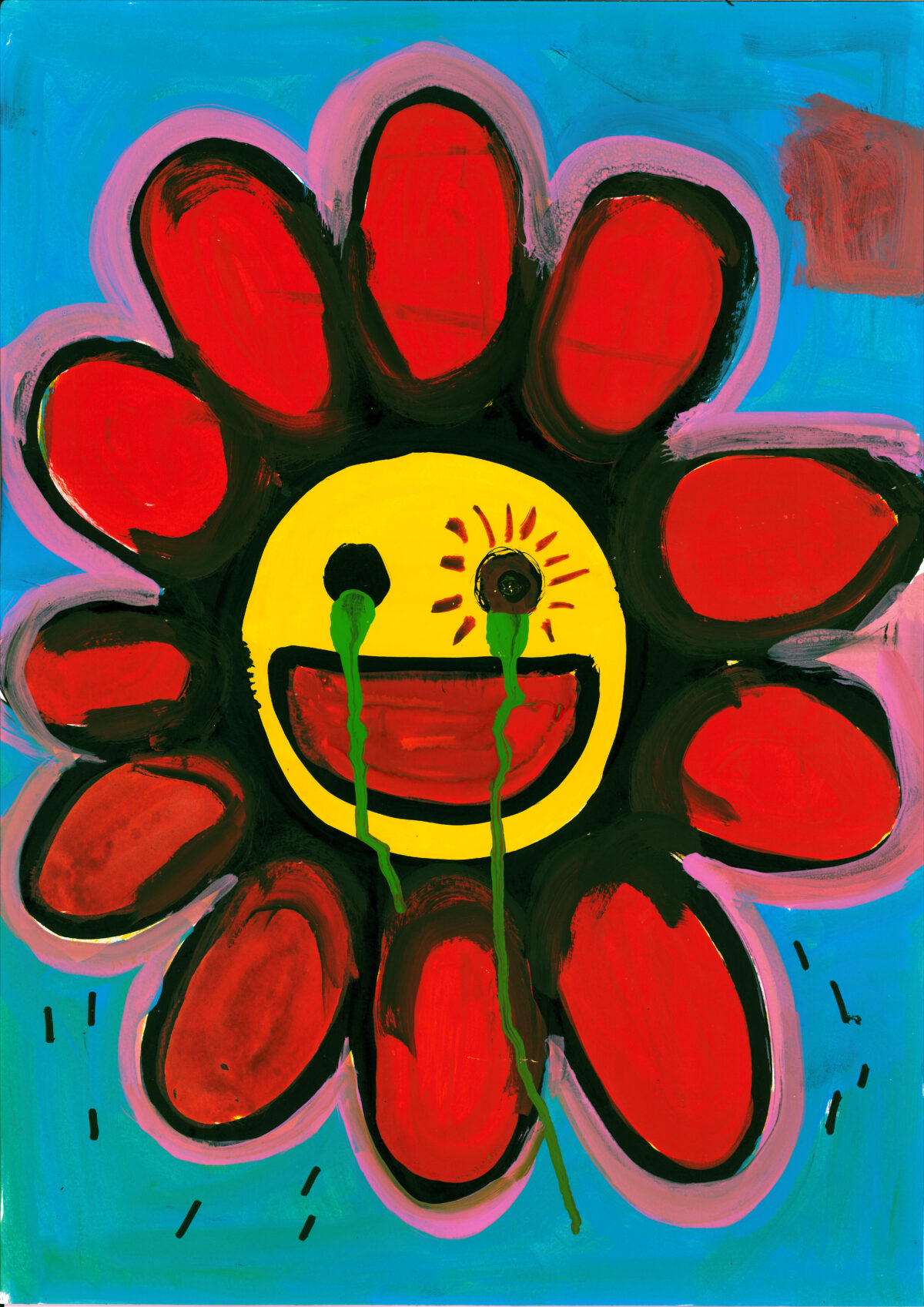 Describing his music as ‘A river flowing to the groove of anthemic soulful electronica’, it’s clear that Luke has a entirely unique vision for his music. ‘Red Flashing Lights‘ is the budding artists most recent release, and to say it has gone down a storm with fans would be a serious understatement. Employing his usual mix of genres, the track is instantly recognisable as a Luke Gomm piece. So we asked Luke what the process was that went into this groovy track.
‘It started when I wrote the lyrics while Jason jammed on the keys. After that I got the groove going and invited other musicians in to jam. The drums were programmed on the classic Roland 909 drum machine Tehillah Daniel laid down some vocals, Daryyl Dodoo played the bass. Has painted the cover art with the red flower, he’s done paintings for each track on the project which is amazing.‘
While we await our beloved live gigs, we continue to scroll madly through Spotify. And luckily for us, Luke is planning on giving us even more to scroll through. With several projects to come, Luke let us know that we have a lot to be excited about in the coming months of 2021.
‘I’m looking forward to sharing the EP Summer’s Blue. I’ve got a handful of ideas that i’m developing for the next project which is exciting. Me and a couple of the other musicians on the records are looking forward to playing live, so coming out of these lockdowns I feel like that will be some much needed fun. My musical journey has been a blessing so far and I look forward to more expression, learning, dancing, collaboration & energy! Peace.’
Head over to Luke Gomm’s Spotify page to hear more of his genre-blending tunes, and keep an eye out for his upcoming EP ‘Summer’s Blue’.
Sophie Wyatt2021-03-25T18:04:35+00:00