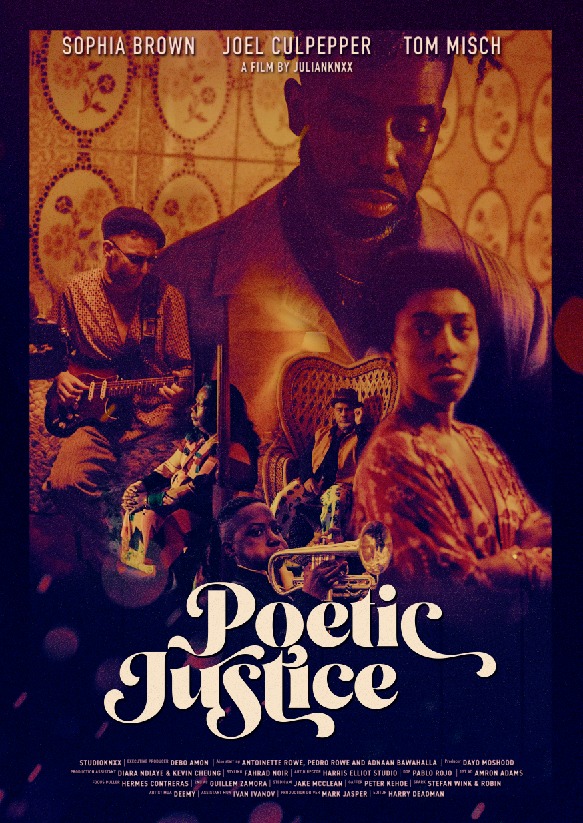 Hailing from South-East London, Joel Culpepper is making a huge splash in the UK music scene with his unique blend of contemporary funk and soul. After cultivating an ever-growing fanbase through his smooth tunes, deeply thoughtful lyrics (and that unforgettable COLORS performance) Joel’s new music has been eagerly awaited. Taken from his upcoming album, Joel recently released his soulful track ‘Poetic Justice‘, featuring and produced by multi-instrumentalist Tom Misch. We caught up with Joel to talk about his new track and coupling video, the obstacles he has faced as an artist during a global pandemic and the future of his narrative driven tunes.

With such an eclectic range of sounds and lyrics that tell a number of journey’s, it’s no surprise that Joel was brought up on some on sounds from some of the most soulful men in the industry. He explained to us a bit about the first memories he has of connecting with music whilst growing up.
‘I think my mum provides the source to my earliest memories listening to music. Me sat at the top of the stairs watching her in the living room eyes closed to either Luther or Teddy.’

Growing up on music that influenced him such a great deal, it wasn’t long after leaving school that he decided he wanted to pursue his passion for music as a career.

‘I think I realised pretty early. Coming out of secondary school music had already made an unforgettable impression. I actually went to New York straight out of college to try and get a record deal.’
The past twelve months have been hard for every industry, and the creative industry have of course taken a serious blow. Producers and artists alike have been faced with challenges from cancelling shows, to finding inspiration in a world that may not be particularly inspiring in the current climate. However, while Joel acknowledges the obstacles that he and other artists have faced, he also gave us an insight into the positives he is taking away from the past year.
‘I think most artists would have felt the lack of touring hitting them hard along with the inspiration to want to write music. One of the advantages I think is that it’s brought the music a little closer together, prioritised what’s really important. Just being able to make music is a real privilege.’

While we eagerly await Joel’s upcoming album, he has released a single to keep our head’s bobbing in the mean time. ‘Poetic Justice’ was released mid-January this year and has gone down a storm within Joel’s fanbase. With a blend of Joel’s smooth vocals and the tracks strong 70’s aesthetic, the song is unique and easily identifiable. We asked Joel what the process behind writing the tracks lyrics consisted of, and what it was like working with music producer and multi-instrumentalist Tom Misch.

‘It’s about forgiving someone you don’t even know anymore. Taking the lessons of a bad experience you would never of had, had it not been for that relationship. Tom was up for being apart of the album. We clicked pretty quick after I put some b.v’s down for his song Tidal Wave. He’s been a real support and brother.’

Much like his smooth, soulful aesthetics, Joel’s song writing process comes with a natural flow. Although music is his career, when we asked Joel what his writing process was usually like, his answer only solidified the idea that he was in fact made to make music.

‘I think good writing involves something so relatable and nostalgic but said in a new way. I like to imagine the chords of a song are speaking a language and it’s my job as the artist to translate the message. The more accurate you are in the translation the better the song is.‘

Mixing so many genres to develop such a unique sound has meant that you are able to hear a number of different musical influences weaved into his sound. Although this means that his music is hard to pinpoint in terms of genre, when we asked Joel to sum his music up in a sentence he said ‘I like the fact people can hear a strong influence from many genre’s. My music is emotive, I want you to feel something.’ It is with this and the promise of an upcoming album that makes us so incredibly excited for the future of Joel Culpepper’s music. So finally we asked Joel what he see’s for the future of his music, and in true Joel Culpepper fashion, he left us on a very cool note.

‘Hope to make more albums and be apart of some more cool projects. Just keep going really.’
To hear more of Joel’s soulful tunes including his most recent single ‘Poetic Justice‘, head over to his Spotify page!
Sophie Wyatt2021-02-26T10:49:08+00:00