Originating in Leeds, five-piece band Eades was formed by singer and guitarist Harry Jordan and his best mate Tom O’Reilly back in 2019. What started out as a creative project, soon flourished into one of Leed’s most up and coming collectives. We caught up with lead singer Harry Jordan to discuss the band’s latest single ‘Delusion Spree‘ and their evolution to become the band we’ve now come to know as Eades. 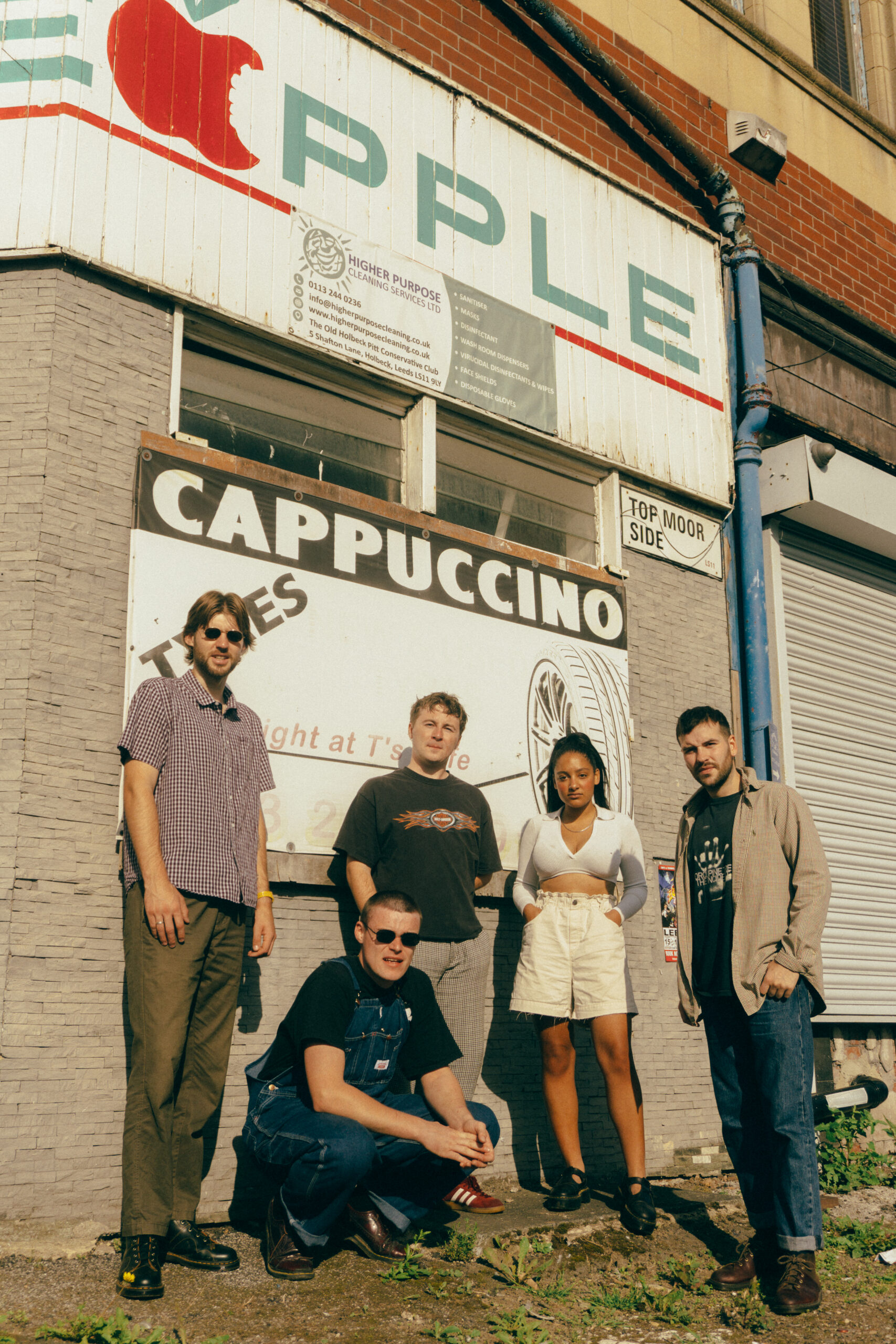 At the end of 2021, Eades was named as one of NME’s Top 100 artists to watch. And this is just the beginning of the recognition the band has started to receive as they have joined more and more people’s playlists. With Sam Wilde on bass, Dan Clifford-Smith on drums and later Lily Fontaine, who adds vocals, synth and percussion, Harry and Tom have helped to build the band to where it is now. So we wanted to know where it all started. How did Eades come to be?

‘Most of us met at uni. We all went to Leeds College of Music, I think a lot of the Leeds musicians that are on NME Top 100 went to that uni so it’s a great place. I was playing in another band with Tom and I basically started Eades as a recording project, just out of boredom really. I was actually helping Sam out with some session stuff as well, so we all crossed paths and had played together at different points. I couldn’t convince anyone to let me produce them,‘ he laughed. ‘So I decided to produce my own stuff to build up my portfolio. And people liked it.‘

Eades’ sound is instantly recognisable as their own. Their layers of post-punk, indie, and basement-made sounds make it impossible to confine them to just one genre or label. So we asked Harry to explain what the music means to the group and how they would best describe it.

‘I don’t want to sound pretentious but we write the songs ourselves, perform ourselves and also mix the songs and engineer them ourselves. We do everything from start to finish, so we have our own sound because it’s purely us working on it. I know other bands that will use similar producers, and certain producers have a specific way of doing things. So our DIY approach is our sound if that makes sense? The processes aren’t always perfect and we don’t use crazy expensive equipment. Just being Eades and doing everything ourselves are the biggest things that affect our sound.

But that’s not to say we wouldn’t want to work with other producers further down the line. We’ve just been in a position where to make it happen we’ve had to do it ourselves. But in terms of ‘genre’, I don’t know… My uncle was asking me at Christmas and I just don’t know. We like a lot of punk stuff like The Clash. But we also like a mix of genre. Post-punk is what everyone calls themselves these days isn’t it?’

With their latest track ‘Delusion Spree‘ making a huge splash among fans, excitement is starting to build for the band’s upcoming album release. The collection of tracks started their creation during the first wave of lockdown. While it kept the band busy during a strange time it also allowed them time to delve into their inner creatives and produce a body of work that they are clearly proud of.

‘I wrote the whole album about two years ago. In the first wave of lockdown I was basically stuck at home for four/five months. We hadn’t even released our second EP by this point. My parents have got this little wendy house outside that my dad built himself. And I just took that over and recorded in there for the whole time. What I was saying in that song was what I was trying to say throughout the whole album. After that we got on a roll of sending songs back and forth to each other. We became a little song writing machine.‘

And finally we asked Harry to look towards the future. We asked what we can look forward to in the future from Eades. And while they have been releasing a steady stream of music already, there is much more up the bands sleeve.

‘We’re supporting a band called Langkamer from Bristol for four shows. They’re doing a massive tour, playing in every town you could think of. Even playing Ipswich!’, he laughed. ‘Then we’re doing our album tour in April. Then our album comes out 4th March.‘

Head over to Eades Spotify page to hear more of their latest music ahead of their album release on 4th March.