18 months later, and England is finally seeing the other side of the most panic ridden and unprecedented times. But, the million-dollar question remains, do we  brave it and go out out, or are we loving the sheltered and relaxed atmosphere of  staying in in?

Our bodies may have grown accustomed to wearing comfortable lounge wear 24/7, however, we are bound no longer to the sofa. And so, in the words of  fashion guru Camille Charriere, it is time “to shed [our] anxious lockdown layers,  spread [our] wings out of [our] cocoon all the way into town”. The world’s latest  butterfly is the multi award-winning American singer-songwriter Billie Eilish,  debuting her transformation on the cover of British Vogue. Eilish left behind her  statement “capricious, rap-influenced couture” in her wake, which “made a  mystery of her body”, which she bravely says was the “initial reason for my  depression when I was younger”. Therefore, the baggy clothes became a security  blanket and a shield from body shamers, But, along with her infamous “jet black  and lurid green” hair, this image became a target for misjudged sympathizers who  hailed Eilish as an advocate for body positivity. Eilish never reacted to any of these  speculations, she was simply doing her own thing. However after she was  photographed by paparazzi in a tight vest, the world responded with unwanted  sympathy; congratulating her for wearing tight clothes and “feeling comfortable  in her bigger skin”. 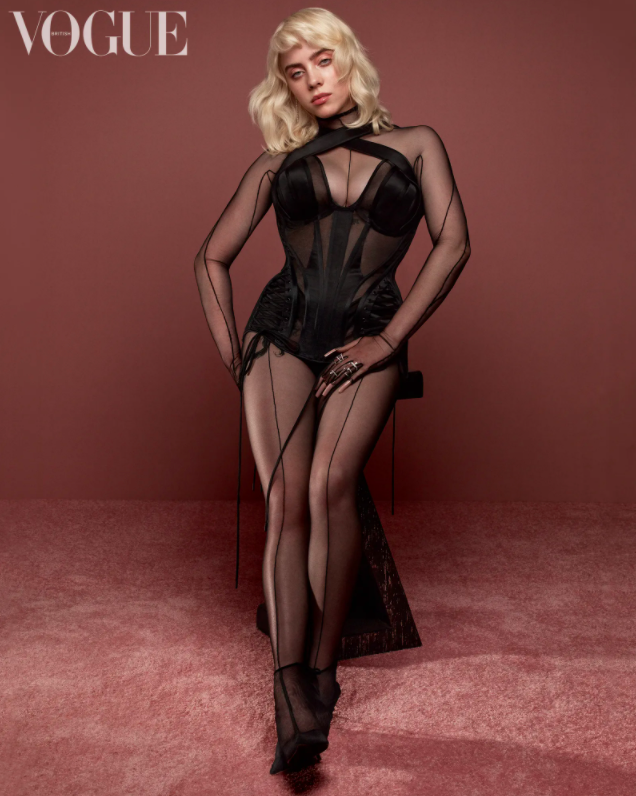 One pandemic and a year and a half later, Eilish was ready to reinvent herself.  Radiating confidence and coolness with her new blonde locks, (which took  four dye sessions to create) all hail Eilish and her most radical change yet. The hair alone would have been enough, but alas, Billie never acts in halves. Replacing her androgynous, gothic garments, for a “classic, old timey pin-up” girl vibe, Eilish has welcomed a new era into her life, and we are HERE for it. Her new look was welcomed by amazed fans around the world who praised her dismissal of the male gaze as she embraced a new look to show that she can be whoever she wants to be without needing praise from anyone.

Sadly, not everyone is supportive of Eilish and her new look. The day after British Vogue hit the stands the tabloids  counteracting with headlines titled, “Proof that money can make you change your  values and ‘sell out’: Billie Eilish shocks fans by swapping baggy clothes for lingerie  in Vogue- despite years of vowing to ‘hide her body”. Immediately Eilish’s fans rallied to correct the headlines, responding that Billie ‘hid’ her body after ‘years of being an actual child’, however at the age of 19, Billie has decided to ‘reclaim  autonomy over her own body’ and is ‘showing herself to the world in the way that  she wants to be seen’.

So, after receiving backlash for hiding her body and then for eventually showing it, can Billie win? Well, she makes it clear that her ‘thing’ is that “[she] can do  whatever [she] wants”. Whether she, or anyone, chooses to show their body and  her skin, it should not take away any respect for her. Which, of course, should be  everyone’s mantra.