Since breaking into the music scene back in 2018 London singer-songwriter Hamzaa has been consistently growing her discography and in turn, her fan base. Having previously worked with artists such as Mahalia and Anne-Marie, the flourishing artist is back again with her explosive new track ‘IN BETWEEN‘ featuring Miraa May. We spoke to Hamzaa following the release of her newest track to discuss her musical journey, unique blend of genres and the future of her music.

With such an eclectic list of musical knowledge and influences, it does not surprise us that Hamzaa was brought up surrounded by a range of different music and genres. She explained to us that her first prominent memories of music revolve around her mum’s love for music.

‘My first memory would definitely be my mum blasting music through the house every morning before without fail, it might be a Joe CD, John Legend, Joss Stone, 80’s soul pop album, Congolese music, some Kenny G and all that lies in between on rotation. And if that wasn’t enough, when I got into the car to drive to school, it would be the exact same, but just on tape. I had a great music indoctrination from early which I had no problems with!‘

Hamzaa’s natural attraction to music continued on as she progressed towards creating her own music. This gradual progression continues as she hones in her talents and becomes more and more distinct within the UK music scene. So we wanted to know if there was a pinnacle moment in which she realised she wanted to turn her passion into a career.

‘It’s funny because I don’t think there was [a pinnacle moment], it just seamlessly started to happen. When I started to trust in my manager that it’s something that I can actually do and make a living out of, that’s when I started to discipline myself about it, I quit smoking cold turkey after visiting the ENT  (ear nose throat doctor) after finding out I had small nodules on my vocal chords and they said if I stopped smoking it would go away, and I did exactly that!‘

A year and a half on, the world is still in a somewhat confusing position. National lockdowns and social distancing have made creatives have to rethink their work, and potentially futures. Hamzaa, like all creatives, has had to deal with a rollercoaster of emotions. She gave us an insight into her time as an artist during the global pandemic, and how she’s dealt with the highs and lows.

‘It’s been random, there has been a lot of positives and negatives. I’ve had to find new ways to express my thoughts and feelings because Zoom sessions weren’t cutting it, it was weird. Music is such a personal thing and I am a peoples person so it didn’t work out for me. I did do a few sessions here and there but I prefer them face to face it was a strange experience! My creative process became more precise, I gained clarity on my creative vision, I became more definitive and particular with everyone I work with, I was very much involved in everything from creating mood boards, treatments, selecting everyone who has worked on my new project, including; directors, MUA, styling etc.’

The idea of confining today’s music to just one genre seems unconventional and just downright wrong. Artists are constantly mixes different elements of genres to create their own individual and distinctive sound. Hamzaa’s music allows a full expression of her loves for music and own voice, and so we asked her to describe her music in broader terms than just genre.

‘I would describe my music as alternative pop with a soul vocal. That’s the easiest way to explain it. I think as artists we should be allowed to do what we want and express freely, and if that means changing up the sound or sentiment sometimes, I think it’s healthy, it allows me to explore parts of myself without feeling like I am holding back or censoring myself. My new sound is gritty, punchy and fun, it makes you want to move and cry at the same time.’ 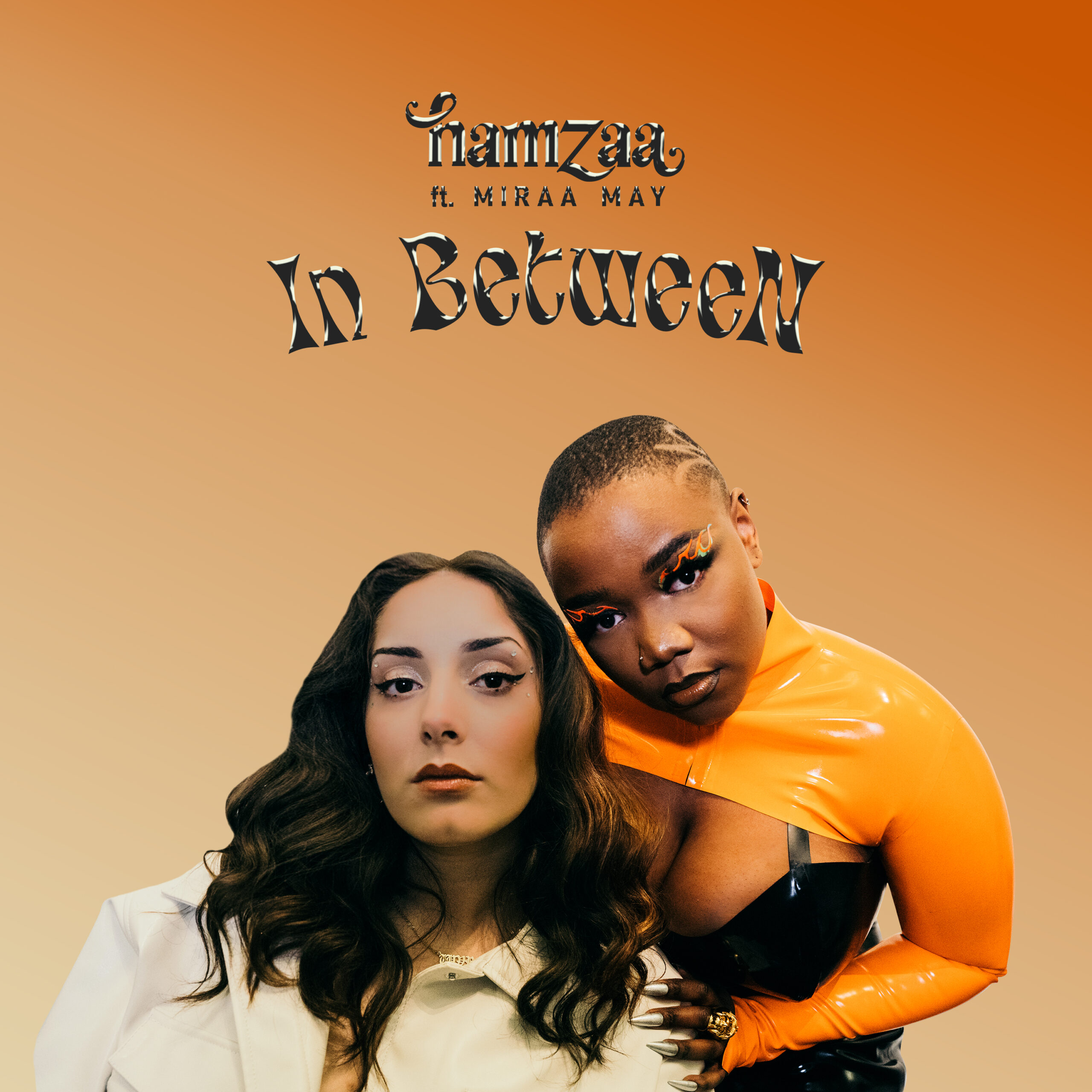 The flourishing artists latest track ‘IN BETWEEN‘ featuring fellow Londoner Miraa May has once again made a huge splash within the music industry. The genre-defying track shows us just about deep Hamzaa’s talent and love for music really goes. She explained to us a bit more about the process behind the track and how it was working with Miraa.

‘In some of my working relationships there have been times where people have made me feel like without them, I wouldn’t have as much access to things that will elevate my career, and they have tried to make me feel like they are able to dictate my actions or reactions to how they treat me. Working with Miraa has been really cool, she is fiery and she has a lot of things to say, which she is not afraid to say which I love.’

Hamzaa’s music takes listeners on a journey. Layers of different genres and unique sounds played against truthful and moving lyrics is what makes us love her colourful tunes. We asked Hamzaa where her inspiration comes from.

‘Each and every part of my life, the ups, the downs. My new project is a combination of new emotions about the same things and how they have all managed to all affect me in different ways, the songs are new perspectives of what I feel and think about. It feels so good to put out a body of work with this new sound because ultimately I have been able to do it in a way that is really authentic to me, and I wouldn’t have it any other way.’

Finally, we asked Hamzaa what the future looks like for herself and her music. With each release, we are reminded once again how impactful her sound and lyrics are. And to say we are excited about seeing her talent grow further, would a definite understatement.

‘Boundless, whatever path my music is going to travel down I embrace it in its fullness. I see my music travelling across the world even more so than it has, I hope to inspire even just one person to do what I am doing. I hope my music can be a go to for the masses.’

Head over to Hamzaa’s Spotify page to hear more of her instantly recognisable tracks, including brand new single ‘IN BETWEEN’ featuring Miraa May.