‘Ghetto goth girl’ Gemini Aaliyah and producer/partner Finn Milburn have been making waves with their dark and mystical tracks. The Leeds based artists use their music as a release of emotions and thoughts in a way that keeps it authentic to themselves while also connecting with fans around the world. We caught up with the pair to discuss their melodic-alt tracks and finding their place within the thriving Leeds music scene.

From the moment the interview began, we could tell that Gemini and Finn’s personalities and aesthetics, while different, were completely encompassing of their art. they bounced off each other in a way that would make you smile while also keeping you captured by their words. So we wanted to know how they got to this point, and what their first memories of music were from growing up. 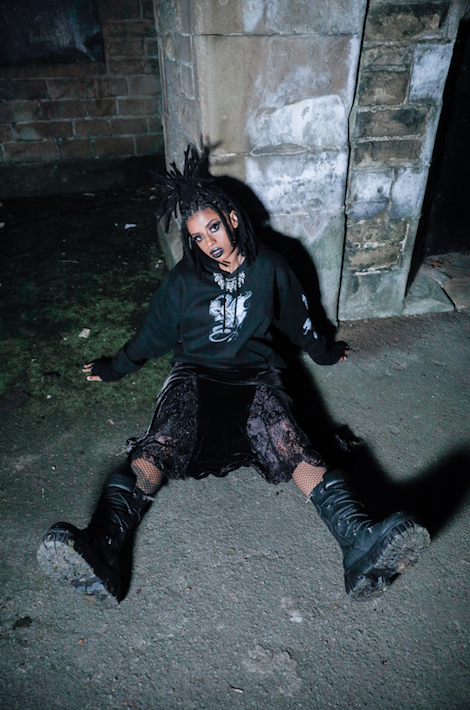 Gemini – ‘My mum is a singer and a dancer, and my dad is a DJ and has been since he was in his twenties so I’ve always been around music. His dad was a DJ as well since forever – all his life. So I think it’s a long standing thing in both sides of my family. My uncle is a bass player and they had a band when they were younger, all the brothers. My grandad used to sing in church, yeah music is in our roots.’

Finn – ‘But not rock music, that’s the interesting thing. Like your grandad was into reggae and early dance hall, and then your dad was funky house, and your mum was soul, R&B, and your uncle’s funk. So you’re the different one in terms of that I would say.’

As the pair started to open up about their wide ranging musical memoir from their younger years, we were interested to see if any of those genres stuck in their mind. And more importantly if there were any artists that stayed with them in terms of influence to this day.

Gemini – ‘Absolutely. I would say Paramore. I used to listen to bands as a teen like The Killers, Fall Out Boy.’

Finn – ‘And then in terms of my production stuff, I grew up with punk playing in my house. And the older I got, I got more into indie music. So I was a massive fan of Block Party and weird little punk bands.’

Finn – ‘We met in high school. We did have the same music class for a bit didn’t we? And also Gem’s dad used to run a youth thing in Chapel Town in Leeds, and I used to go there after school and they had computers and stuff to make music. So we just got to know each other through music and through life really I suppose.’

After explaining their differing tastes and creation preferences, we went on to discuss how the pair work together and whether they face many artistic obstacles. And while they explained that this happens within their creative flow, it truly is one of the flairs within their work.

Finn – ‘Yeah I think that’s part of the process. Of when you’re creating and there’s two of you, there’s always a low level debate. But it just flows, doesn’t it?‘

Gemini – ‘We’re very lucky because we really gel as one. Finn really likes the hyper-pop, electronic influences so we incorporate them more in our new music. And I really like the rock stuff so it’s about merging those together.’

Finn – ‘I get really nerdy about the music, I want to push boundaries. Push it to a weird place where I feel like I haven’t really heard something like it before. And you just come with the raw music and feed the energy of it. We can just jam a song out so quick.’

To confine such unique sounds like Gemini and Finn’s to one genre or label would seem entirely reductive. The pair have combined a number of influences from different genres, generations and countries to produce the music they currently create. So we wanted to know what the music meant to them and how they would sum it up themselves.

Gemini – ‘There’s a sense of going through a situation or a period or an emotion. Getting that out through your medium – that’s use releasing our energy.’

Finn – ‘Yeah converting energy! The best times I could ever write a melody is when I’ve got a really strong emotion. Usually I’ll feel really shit, down or something’s happening like a key thing in my life. And I’ll feed it into my keyboard, I can feel it happening and I get tingles on the back of my neck.’

Gemini – ‘I sing all day every day. To concentrate, to stay on conversation, to work things out, to do a task. I don’t know what I’d do without it, it’s my form of communication because I’m not the biggest talker and I’m quite introverted.’

Finn – ‘I think maybe the age of the internet is bringing more artists out, and I think we’re discovering a creative scene. Right now actually. Which I don’t think we felt was here before. Back when I was making hip-hop or anything, it was just house. The only way you could do anything was as a house DJ in a club. I think it would be mad to be 12 or 13 now with this scene. With the internet and social media the possibilities have been ramped up a level.’

Finally Finn left us with some exciting prospects. Following the release of their latest track, the pair are ready to keep climbing and exploring the world of music, as well as their inner most emotions.

Finn – ‘Because we’re really into magic and spirituality, and alchemy. Because alchemy was all about converting things – making materials out of emotions. That’s kind of what it feels like when you make a song. It’s like you birth something and it goes off, it’s crazy. So we wanted our releases to be as close as possible to the new and full moon. This new one is called ‘AFTER HOURS‘. Again it’s a bit of description of magic, but from a new angle on things. It feels like we’re deep into our creative path now, so we’re just going to keep exploring.’

Head over to Gemini Aaliyah’s Spotify page to hear her latest track ‘AFTER HOURS‘.