While life is starting to get back to a state of ‘normal’ post-lockdown, the world is still far from the reality we found ourselves in at the beginning of 2020. While people continued to hold out hope for this summer’s festivals and concerts throughout the first few months of the year, it soon became clear that music events had very much been put on hold. While it has been upsetting for fans, the pandemic has had a devastating blow for the careers of singers and musicians themselves. We got the chance to chat to renowned musician Frank Turner about his thoughts on the ‘new normal’ we are facing in terms of live music.

After releasing his first album ‘Campfire Punkrock‘ back in 2006, Frank has gone on to produce eight studio albums and with them, gained a huge legion of loyal fans. With his own unique combination of folk, pop and punk he has become an internationally charting singer, with more than 2000 live shows under his belt. And as lockdown restrictions lift, he is continuing to add to those numbers.

Frank’s love for music started as a child when he stumbled across rock’n’roll; ‘via the Freddie Mercury tribute concert and an Iron Maiden poster’ he explained. ‘It just hit me like nothing else ever has before or since. It was a very pure, decisive moment in my life, and at base that feeling has yet to change. I feel very lucky to have been able to make this my life and work.’

Although we refer to the past seven-eight months as ‘lockdown’, Frank told us that his time in 2020 has felt fragmented by different emotions and anxieties, making it feel like a construction of pieces rather than a whole. ‘I think that “lockdown” has not been a monolithic, single experience for me’, he explained. ‘At the start, I believed that one silver lining was some time to write and be creative, without any distractions. But of course there was one huge distraction – the global pandemic! So I’ve had moments of being sort of paralysed, moments of writing far too many ‘lockdown’ songs, and then, thankfully, some genuinely creative moments too. I’ve been pretty busy overall, once I found my stride in the new normal.’

Prior to lockdown, Frank recorded a split album with lead singer and bassist of American four-piece group NOFX, Mike Burkett. While it was recorded before the pandemic began, he explained that they began mixing and editing the album in March until it’s release at the end of July. ‘Mike and I have been friends for about a decade, but I also grew up as a massive fan of their music, so when he asked me at a festival in Italy last summer if I’d be interested in the split, I was blown away. It’s a huge honour for me, to stand shoulder to shoulder with one of the most legendary punk bands there ever was.’ 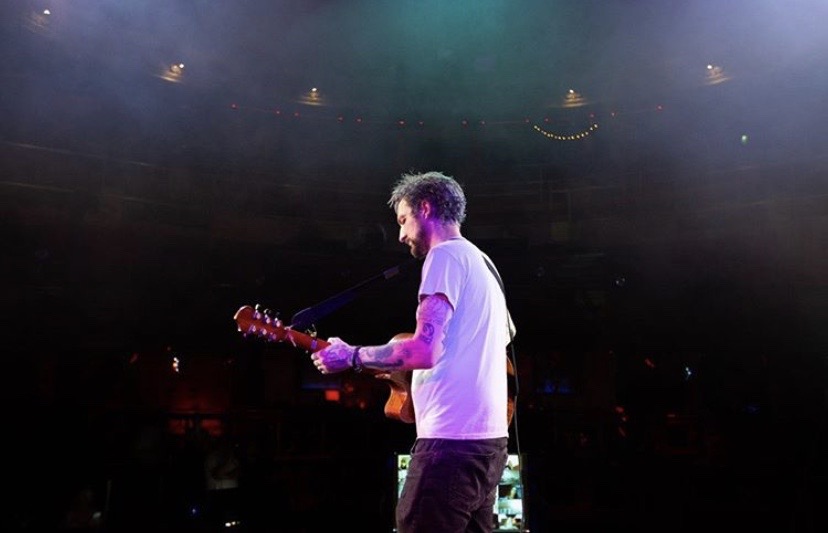 On the 29th of July Frank returned to the stage (more specifically The Clapham Grand’s), for his first show since he last performed on the 15th March in Southend-On-Sea. Following artists Ciara Haidar and Jay McAllister (AKA Beans On Toast), Frank went into detail about the number of different emotional stages he went through on his first gig back. ‘The show at the Clapham Grand was a bit of a mixed bag for me, emotionally. The first and perhaps most important thing was that the simple act of being on a stage again, in front of a real audience, was profoundly moving for me. And I like to think for the crowd too. As much as live-streaming is a reasonable response to current circumstances, it’s just not the same as being in a room and engaging with an audience. But it was also strange. The restrictions we’d been asked to follow by the powers that be were draconian and very unusual, and that certainly affected the vibe somewhat. There was also the knowledge that the business model for the show was unworkable. Which is a big part of why we did it – to show the government that more needs to change before our livelihoods become viable again.’

After being one of the first acts to start performing again following lockdown, we asked Frank what he predicts for the future of live music events. However, like everything about 2020 (and the near future) trying to predict what will happen next is near to impossible. ‘It’s hard to predict really, and it will all depend both on what regulations the government sees fit to impose, and of course on how people react to that, how they feel, how willing they are to re-engage with modes of life that used to be normal but are now considered risky. At the very least I think it will be several years before we return to the status quo ante. That’s a pretty depressing thought for me, but it seems likely. A vaccine might change the dynamic of course, but it’s hard to say anything with any certainty until that actually becomes reality. In the meantime, people are working hard at finding alternative setups, some better than others. It’s good to see people from the live industry thinking creatively, but at the same time, there’s no getting around the fact that our job is centred around gathering large numbers of people together.’

As he explains in his blog post, Frank and the other artists playing at The Clapham Grand in July were not able to be paid. While he told us that he sincerely hopes that live music events will eventually get back to normal at some point in the future, he also spoke about the devastating short-term effects it will have on the industry. ‘In the long run I’d imagine it will. But that’s a timescale of years, and a lot of people will suffer, a large part of the industry as it was will collapse, in the meantime.’

Finally Frank left us with a thought-provoking and somewhat haunting explanation of the emotions he’s felt to the ‘new normal’; ‘All sadness. There’s nothing exciting about watching your career and industry be destroyed.’

If you want to hear more about Frank’s on going musical career and how he is navigating his way through the global pandemic head over to his blog HERE.