Taking her own spin on contemporary jazz, flourishing sing-songwriter Honey Mooncie is continuing to grow her fan base and discography. Since starting to write music from the age of 11, Honey has developed her sound to capture the hearts and headphones of many. We were lucky enough to chat to Honey after her latest release ‘Here for Me‘ and prior to her exciting new mixtape. 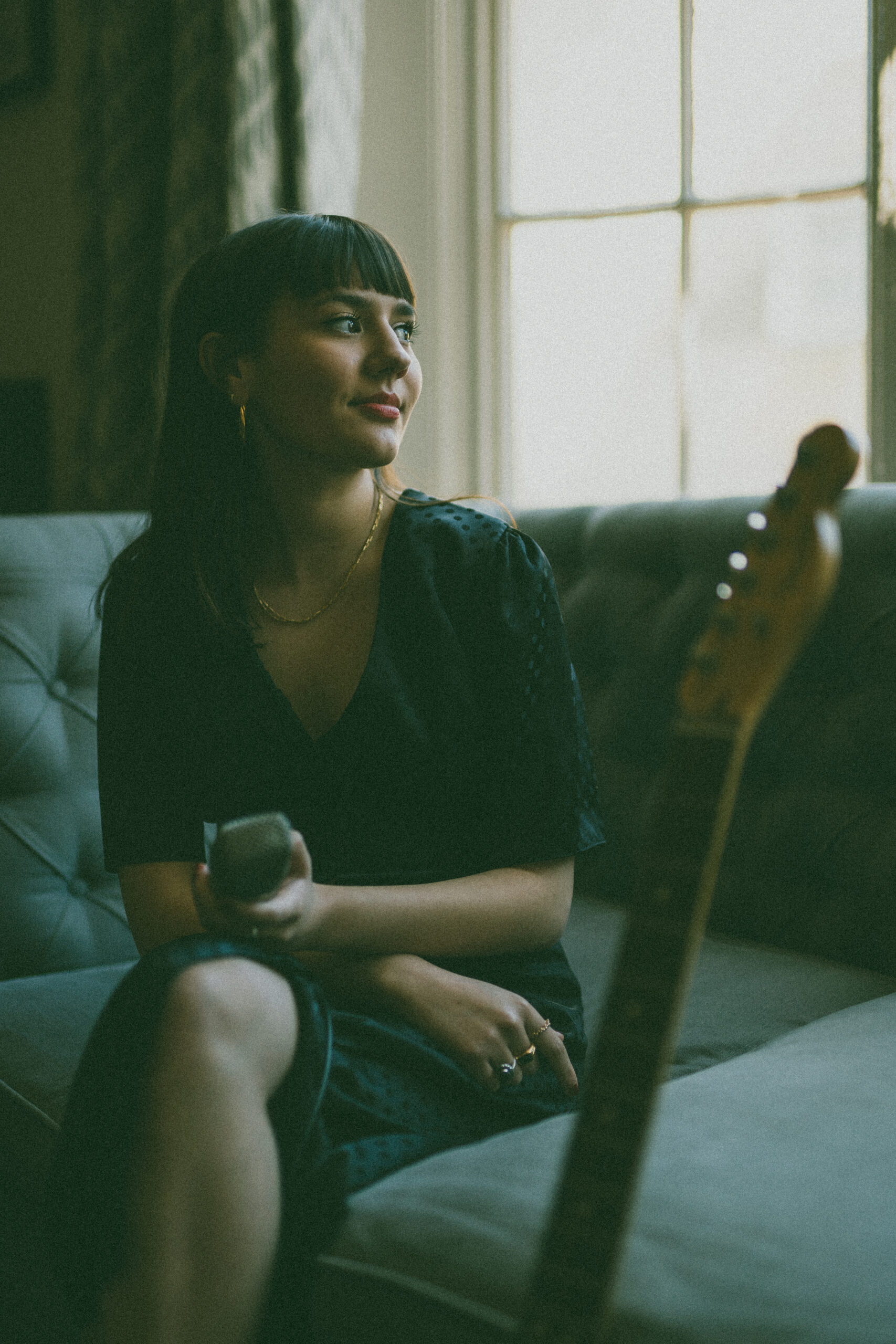 We kicked off the interview by going right back to the start. Honey took us down memory lane to relive her first memories of music. Growing up with 3 siblings, Honey explained that she was always surrounded by different genres of music. Her young life revolved around learning new musical skills and going to classes which she tried to dismiss, but now looks back on fondly.

‘All of my siblings are quite musical and my parents are artists in the sort of classic sense of being painters. So whenever we showed an interest in learning an instrument or anything they would be really really keen. All of my other siblings let theirs go, but I just stuck with it I guess.

I’ve got to say, at the time I hated it. My parents used to chuck me into loads of singing activities and lessons every week and going to drama school on the weekends. But it was the classic ‘I don’t want to do what you’re telling me to do’. But I’m so glad that I did it now, and it’s such a nice memory at such a young age.‘

It wasn’t until she was handed down a key bit of musical equipment that Honey was opened up to a whole new world of music. She explained to us that while her siblings were all growing and developing at different stages, she was able to find inspiration and influence in their own loves of music.

‘My sisters are 8 and 10 years older than me, so there’s quite a big age gap. But when my sister got her MP3 Player, she gave me her Walkman. And it was my first technology thing. And she gave me her pouch full of CD’s, and there was ‘Back To Black’ by Amy Winehouse in it, and I remember listening to it and being like ‘Oh my god what is this’. Because up until that point I’d listened to the Sugababes and stuff like that. So I was amazed. My mum always says she found it really funny because she could hear me singing to it but I had my headphones in and I was singing so loudly. But obviously it was quite an explicit album for an eight year old to be singing out loud,‘ she laughed. ‘She had Avril Lavigne in there and Norah Jones. It definitely influenced me loads. Amy Winehouse is still my favourite artist and that was the first time I heard her, in that little Walkman.‘

We then went on to discuss genre. Over the past ten to twenty years, music has developed at an insane progression. The term genre is verging on obsolete as more and more artists take sound into their own hands. Taking from different genres and inspirations allows artists like Honey to really express themselves as truly as they know how. So we asked Honey to sum up her music outside the terms of genre.

‘I wanted to take something from the past stylistically and add my own spin to it and make it a new thing. Because that is the music I have always been drawn to, the ones where you hear something from the past. Whether it be like 60’s soul or whatever. I think sonically that’s what I was going for. And making it really honest and saying what I felt, and it being… Not tongue in cheek but just being what it is. It’s all organic and it feels like it’s my baby.‘

In the run up to her next mixtape project that is set to be released later this summer, Honey has blessed her fans with one of the tapes singles ‘Here for Me‘. The track, and project as a whole takes listeners on a journey through love, lust and heartbreak. And essentially gives you the experience of a relationship from start to finish. Honey explained to us the process behind this track and how it came as a surprise to both her and the people she was working on the tape with.

‘It’s quite funny actually. So me, Fred and Owen were never meant to write this mixtape. It was basically an accident. We had a song called ‘1953’ which is coming out soon, that we wrote together and my management at the time were hurrying me up with it. So we booked another session and we ended up writing another song, and it happened again and we ended up writing ‘Here For Me’. So I came into the studio, and it’s quite tragic but two days previous I got dumped by this guy, and it was the same guy I’d written these two other songs about. I was at that stage in a break-up where I’d got over the sadness and I’m just angry now. And I remember going in thinking he never even cared, and Fred and Owen said ‘let’s not finish the other track let’s write about this’. So it literally just came from me venting and looking back at seeing how he was never actually there for me. There but not there. So the whole project turned into a beginning to end relationship.‘

Finally we asked Honey what we have to look forward to this year, and beyond from herself and her music. While this year and a half has been slow, dull and extremely draining for the music industry, we are starting to see the light. And we cannot wait to start seeing our favourite artists like Honey in the flesh once more.

‘Hopefully we’re looking at end of summer/beginning of autumn for the mixtape release. I’m so excited because we started writing it two years ago now. I’m back in the studio now and I’ve been writing a lot with Toby Trip, and Sam Wills who I did ‘Traingazing‘ with. I can’t wait to get back gigging again, so for the future more gigs and writing and releasing ahead.‘

Head over to Honey Mooncie’s Spotify page to hear her latest track ‘Here For Me‘!