If you haven’t heard of English-Italian singer/electro-pop superstar Valentina, what have you been doing?! Having previously worked with big names in the UK music scene such as synthpop group Hot Chip and grime artist Kano, Valentina’s illustrious collaboration list is something to admire. And just adding to her musical discography, the flourishing artist has released her second self-produced EP ‘Nature‘. We got to catch up with Valentina about the songs on her newest release, incorporating her heritage into her music and her brand new Spotify playlist that champions fellow female artists. 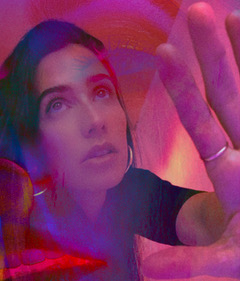 After being born in Italy, Valentina’s mother brought her over to England where she grew up. From a young age, Valentina explained to us that she was surrounded by music. And as she grew so did her love for music, and creating it. Rather than a specific moment of realisation, Valentina found her progression into music natural.

‘If I’m honest until my mum met my step-dad the only music I remember her  having was a Bodyguard CD, which began my obsession with Whitney Houston, and I think a Stevie Wonder record or two. So all you need really! I learnt flute as my first instrument but didn’t really enjoy it and then me and my mum were donated a big old organ from a family friend who she used to  translate letters for, and that’s when I started writing songs and playing around on that.’

I think as soon as I realised I could sing I just used my voice for everything. I did not stop singing. I’m pretty sure it was infuriating to live with! And from  that it was always quite natural for me to write my own songs. I just  remember doing it for hours and hours, writing lyrics and recording myself  singing. It was my sanctuary and it made me feel safe.’

National lockdowns have not only meant a big blow to the creative industry in terms of live events, but also inspiration. Spending all day everyday inside, staring at the same four walls is not exactly a breeding ground for creative ideas. However, while Valentina explains she has faced her fair share of obstacles, she has also explained to us some that she has taken away some positives from this time also.

‘It’s been strange because obviously it’s been great to get some music out  again, but also very anxiety-inducing, especially at the start of the first  lockdown. I think on one hand this pandemic has made me feel like there’s  time to catch up a bit if that makes sense. I think it’s made us all more aware  of time and how we are spending it. So yes I think that has been an  advantage.’

Summing up her music as ‘A heartbroken insomniac hiding under a duvet singing to themselves in the middle of night,‘ it’s clear to see that Valentina knows exactly what direction she wants her music to go in. In the build up to the release of her upcoming EP, Valentina decided to release a single from it called ‘Don’t Say It’. We asked her to give us a bit of a backstory to the electronica pop tune.

‘I was finally accepting that a relationship that had ended a while back was  over for good. I’d had the sense that we would find our way back to each  other, and the realisation that we wouldn’t felt like it ending all over again.  After a few new relationships which just didn’t match up, it felt very difficult  to let it go. The line ‘don’t say it’ summed it up for me, if it’s left unsaid you  can still imagine another reality that isn’t so painful.’

Whilst also working on a self-produced EP, Valentina found the time to put together a playlist of ’10 songs by women for women’.

‘I wrote the song ‘Nature’ from my EP for a close friend when she was going  through a really rough period in her life. It felt like a kind of love song and it  just got me thinking about how many songs have been written as love songs to friends, to yourself, to other women, your child, your mother. A song that  is not necessarily a conventional love song to a lover.’

While Valentina has been working incredibly hard in the run up to the release of ‘Nature‘, she informed us that there is even more exciting announcements to come.

‘I’ll be releasing some more music towards the end of this year and hopefully doing some live shows, which I am really looking forward to!‘

To check out more of Valentina’s electronica-pop tracks, including her brand new EP ‘Nature‘, head over to her Spotify page now!