As we all know, national lockdowns have put a stop to many events and activities. However, this has not slowed the roll of rising star Dylan Cartlidge. Blending funky hip-hop beats with smooth, moving vocals, Dylan’s music is not only unique in every sense, you can’t help but tap your foot and nod your head. Honestly, we dare you to try not to. Using his talents to encapsulate both his infectiously happy personality with his past traumatic experiences growing up, has produced some of the most touching and wholesome tracks we have ever had the courtesy of listening to. We were lucky enough to catch up with Dylan over Zoom and speak about his journey into music through trauma, dealing with the pressures of lockdown and the future of his unique sound.

As soon as Dylan appeared on our screens, we were hooked. It was easy to tell that the energetic, authentic voice that you hear in the songs was in fact a complete reflection of the man behind them. So we wanted to start right at the beginning, what were Dylan’s first prominent memories of music whilst growing up? And at what point did he realise he wanted to make music? To these questions, Dylan’s transparency was incredibly moving. Speaking on not only about fond memories of music, but also the trauma that led to his passion.

‘One of my favourite memories of music growing up was when I was 8 or 9 years old. One of my brothers was getting married, and I don’t know how I managed to sneak an invite to the wedding or the reception, but I managed to worm my way in. So we went to the disco section and I just remembering hearing ‘It’s Tricky’ by Run-D.M.C., and I just kept requesting it over and over again. I would just go crazy, like do back spins over the floor.

I have a lot of fond memories of music, but in contrast to that I had a really difficult upbringing which had a lot of trauma involved. And it was really trauma that led me to making music. Because I had such a difficult upbringing it got a point where I was either going to make something really positive out of my life and experiences, or I was going to be taking a less positive, more statistical route. So it was at that point that I decided to try and pursue it and for people that may have gone through similar hard ships that there is life after trauma. So that’s when I really connected with music and knew that was the path that I wanted to be on.‘

Using his music to prove that there is ‘life after trauma‘ only adds further to why we love Dylan. The combination of passion for music and the passion to speak to people really is so incredibly unique and inspiring. We next asked Dylan if growing up he felt like he was given a voice of represented through the media and music he consumed.

‘I think at the time it was lacking, but in the best way possible. I was a massive hip-hop fan, and the majority of hip-hop that I was exposed to, it was all about drinking in the club and getting merry. Obviously that was the over-arching theme at the time. If it wasn’t hip-hop it was pop music, with idols like Britney or Justin Timberlake, or JoJo at the time. So I didn’t necessarily feel represented, but a lot of popular music isn’t always representative of minorities. I wish it could be, but I think a lot of it sold on the idea of selling themes or dreams. But the first artist that I really felt like I connected with or represented me with was Kid Cudi, because he’s a rapper that doesn’t shy away from mental health and his own struggles. I just couldn’t believe there was someone on the radio who was in the same position as rappers who were talking about being in the club, but he was saying I’m not enjoying being in the club and I’m struggling but that’s OK and I’ll be alright.‘

We then started to speak about genre. Dylan’s music employs so many different sounds and tones of voice in order to produce his music. Growing up with a heavy influence from hip-hop music has meant that while Dylan can explore nostalgic tunes within his work, he can also intertwine tones from soul to R&B. So instead of trying to pinpoint his unique sound under one genre, we asked Dylan how he would explain his sound.

‘With music now more than ever, genre is becoming obsolete. So when it comes to me and my music I’d say, a cooky black guy with an afro that grew up on Cartoon Network and eating overly sugary cereal,‘ he laughed. ‘It’s an encapsulation of me, my experiences. My generation of artists, we’re on the presuppose of the boom of culture and impact. So I’m so excited to see generations growing up into such a multi-cultural society, whereby they have the ability to be exposed to so many different cultures. And I don’t know what I would do if I didn’t have ramen or anime. I definitely have the internet to thank for that, and that is a reflection of culture has impacted me and my music.‘ 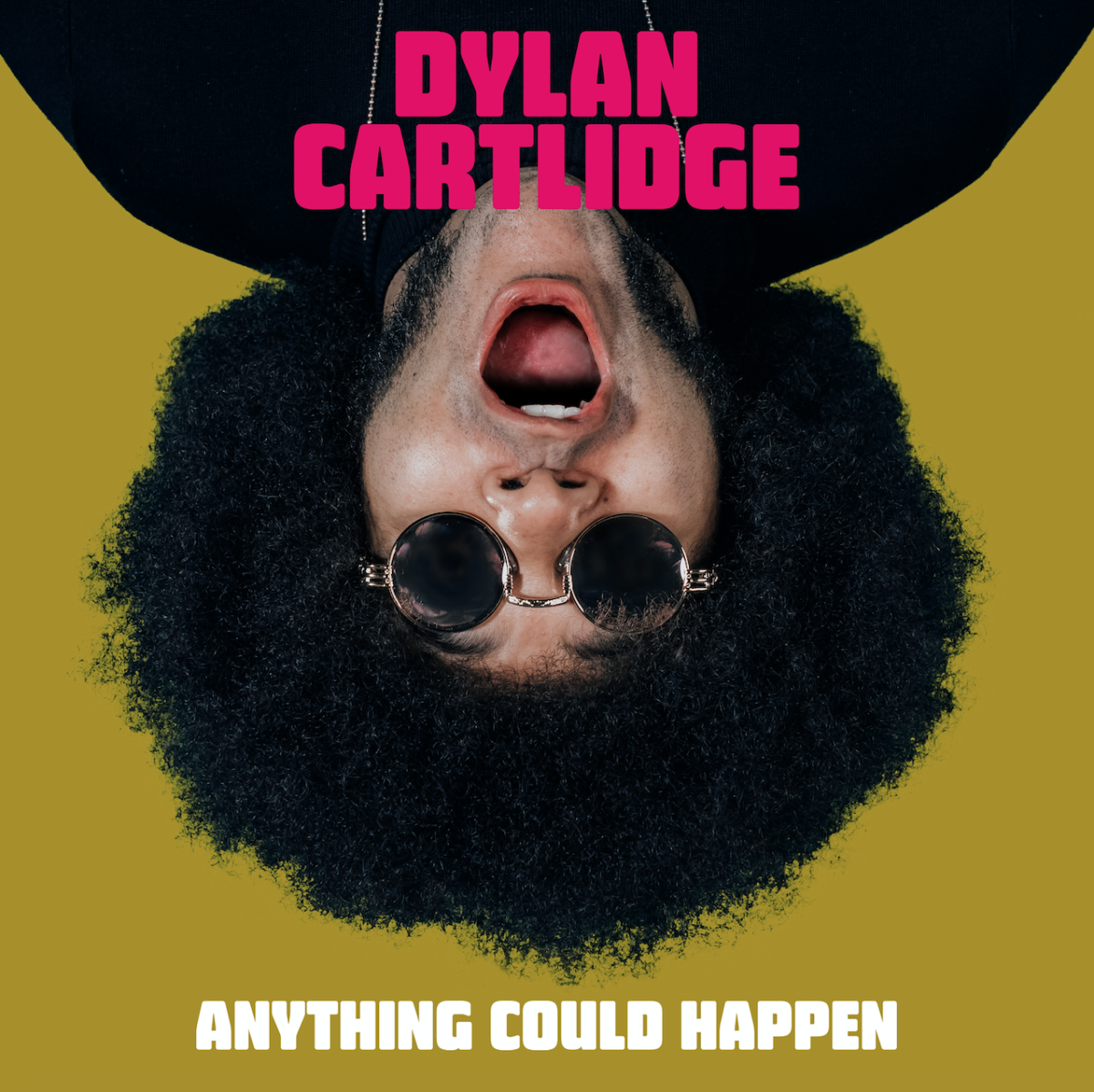 ‘Anything Could Happen’ artwork by Jodie Canwell (@jodie_canwell)

Dylan’s most recent release ‘Anything Could Happen‘, was both hotly anticipated and greatly received. A song that will instantly get your head bobbing, while also inviting you to think about the situation your in and how you got there, even if it wasn’t planned.

‘So there’s kind of two sides to ‘Anything Could Happen’ in that the song was written in lockdown in the UK. I basically wrote a whole album in lockdown. And the reason I got into music, I spoke a little about trauma but the aim was always to create a body of work and piece of art that was equal parts funky and cathartic for me, and to encapsulate my experiences. To use those experiences to make an artistic statement about the context of the world I’ve grown up in. In the beginning of lockdown I felt a bit lost because I hadn’t yet done that, and thought maybe my window of opportunity was shrinking. But that was the thing that was holding me back from recalibrating my dream, so I took a lot of pressure off of myself. Then just out of nowhere I created this album out of nowhere, I listened to the running order for the first time and I was proper emotional. So ‘Anything Could Happen’ is a really encapsulation of that, a massive breath of release at that moment that even though life hasn’t gone the way you had planned that one day it may not have been what you planned, but something new is entirely possible.‘

While live gigs are on the horizon, musicians and artists alike are still waiting to return to fan-filled events. In this time artists have had to turn their hand to social media in order to keep up their connection with listeners. Not only has this meant added work but also added pressures for many artists that may not have otherwise used social media quite as much. We asked Dylan if he has been feeling these online pressures and how he’s been dealing with them.

‘Yeah a million percent. I’m a very optimistic person, a very hopeful person. But I do have my own mental health issues, and for me I find it quite a disruptive and detrimental thing in terms of social media in general. It can feel quite intrusive on days and that’s kind of my personal feelings around it. I’m quite an introverted person in nature, but I do accept that that’s part of what I do and I have to connect with my audience. You have a pretext to everybody from a social media profile and there’s a stigma that goes along with that. It just adds a whole nother layer of complexity to society in general. Ultimately that’s the way the world is now. I think there is healthier ways to use it and I’m trying to find those.‘

Finally, we asked Dylan when we can expect the rest of his groovy, moving tunes. While we wait for our beloved live gigs to return to us, we are thrilled to know that it is not to long till we are listening to more of Dylan’s music.

‘The album will be out around July time. I will be releasing a few more songs before then but July will be when everyone can listen to the project in full.‘

Head over to Dylan Cartlidge’s Spotify page to hear more of his music including his brand new track ‘Anything Could Happen‘.