Birmingham based Jaydonclover talks about the Birmingham music scene, her newest EP and her favourite artists right now

2020 has been a hard year in many ways, including the struggles it has caused for the music industry. However, singer/songwriter Jaydonclover has been using this time to her advantage. A big name in the rising Birmingham music scene, Jaydonclover’s music been spreading like wildfire over the past few months, with her emotional and soulful tunes becoming the soundtrack to a lot of people’s lockdown. We got the chance to speak to her about the stories behind her songs, her inspirations and some of the artists she’s loving at the moment.

Reigning from Birmingham, Jaydonclover’s music is full of mixtures of lo-fi and R&B beats, parallelled with emotional and vulnerable lyrics. However, Jaydonclover gave little away about herself, including not disclosing her age. While she doesn’t like to tell people her age, we can at least rule out (our guess of) twenty years old; ‘To be fair I don’t like to tell people my age, because I like to keep people guessing. Yeah but I’m not twenty.’

Jaydonclover’s music first started getting released in 2017 over Soundcloud. She has since gone on to release a number of singles and an EP called ‘Recovering Lover’ in 2020. However she is not new to writing songs and performing for people.

‘I’ve always been into music. So when I was younger I’d always be in school nativities, I’d always be the angel. And then I went on to secondary school and that kind of stopped until year 10 when I did musicals. Then I went on to college and uni to do musical theatre. To properly start doing my own music was 2017. I remember doing my first proper tracks that I put out on Soundcloud and I did music videos for. So three years this year.’

While it is clear that Jaydonclover’s music comes from an emotional perspective, she explained to us that this is not always intentional, but it is in a way an accidental catharsis. She also told us that when she released her poignant EP during the winter time, it was so people could have a soundtrack to their dark winter days.

‘I don’t always intend to write from personal experiences, if it happens it just happens and it’s something that I’ve got off my chest. But most of the time I just hear a beat and think ‘OK how does this make me feel?’. And I’m kind of just really still for a bit and I’m like ‘What am I feeling with this? How is this making me feel? If this beat was playing what would I have to say?’. So it kind of goes from there most of the time. It’s always sad stuff.

With ‘Recovering Lover’ as a whole, that was the journey of a break-up. So it starts with the interlude ‘Falling Falling’, which is me saying ‘I’m falling, I’m here, I don’t know how I’ve got here but I’m heartbroken.’ So it’s a fast transition of falling out of love with a person, or a person falling out of love with me, and I’m now heartbroken. So I think just to be able to tell a story is what I wanted to do with ‘Recovering Lover’ and for people to be able to follow it as well. Yeah, to tell a story and make it be like hopeless romantic, really sad. And I released it in the winter, because in the winter we’re all kind of a bit sad, a bit down. If we’re not cuffed it’s like ‘Ahh man I wish I could cuddle someone’, so I wanted that to be the soundtrack for everyone’s winter.’ 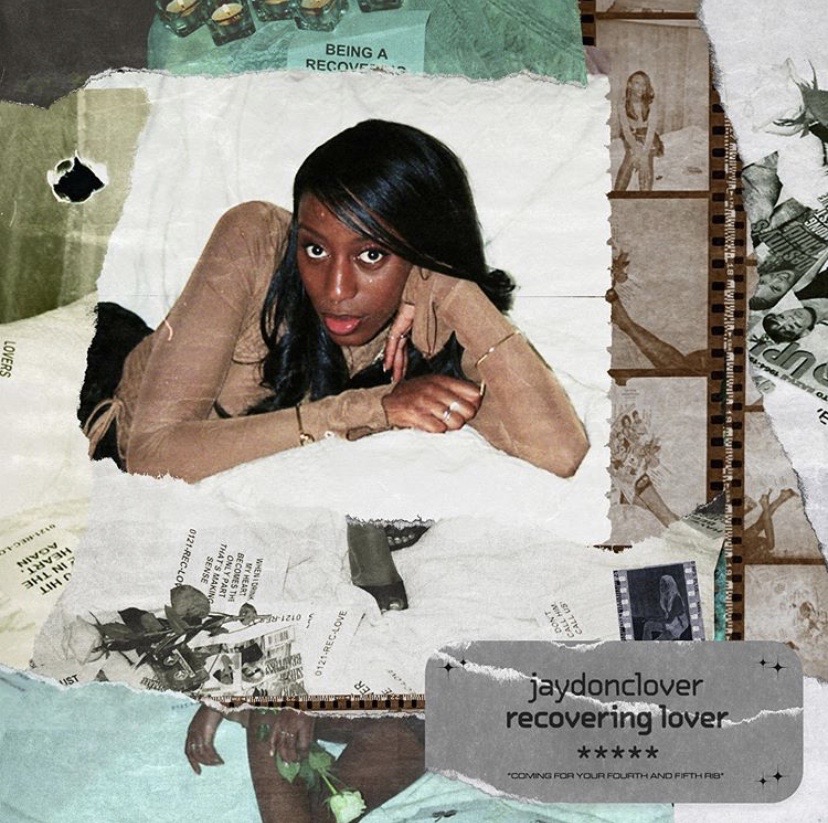 Her most recent EP ‘Recovering Lover’ was released earlier this year, just a month before we went into lockdown. While Jaydonclover has not had the chance to perform more than one in person show of her newly released songs, she has found other ways to fill her time productively to better both herself and her music career.

‘So the EP came out on the 28th of Feb, and then I had a show on the 9th of March and then on the 13th of March lockdown was put in place. But I’ve been able to do some live shows, some pre-recording stuff, quarantine style music videos, so that’s kind of allowed me to do something and spread my name out there a little bit more. Which has kind of worked to be fair and I wasn’t expecting it to. But no, not a lot of shows let’s say, or presenting people with my music, because I’ve just been stuck here.’

The music video to accompany one of the songs from her latest EP, ‘MRNICEGUY’, was also released during lockdown which generated a lot of buzz around the EP. Whilst the video was only released last month, Jaydonclover gave us a little insight into what it was like shooting the piece back in December.

‘That was done in December, and it was actually meant to come out in January, but we just sat on it for a little bit and said we’ll give it some time. And then lockdown happened so it kind of felt like, OK let’s have a nice run of releases throughout lockdown. And it was actually meant to come before ‘Her Over Me’ as well, but obviously that one was quarantine style. It was absolutely freezing.

We filmed a bit at my house and then we packed everything up and went to my nan’s and then we packed everything up and went to a park. It was all kind of in the same area but it was a lot of running around, and it was really cold and everyone was like ‘I need to get home’. It was hectic, but I think if I had more of a team to kind of say ‘OK I’ve got everything, whereas it was kind of just me looking after me and everybody else. So sometimes it’s quite fun when it’s literally just me and milky, but if it’s loads of people it can be a bit hectic.’

We also spoke about some of her biggest inspirations growing up. While all female, Jaydonclover’s music taste growing up definitely had a broad range. However the correlation of all these artists is their ability to be vulnerable with their music whilst still embodying strong, independent women.

‘Growing up I’d say Destiny’s Child, Pink, Whitney Houston, Erykah Badu. And then as an adult now, to hear what they sing about I’d say Pink definitely, that one album. Alyiah, I love Alyiah, Erykah, Janae Akio and Etta Bond. Just because they’re all so honest in what they sing about. They’re also really vulnerable in their music but yet such strong women. So that inspires me a lot.’

Almost every creative, and those who are in different lines of work, have felt the pressure to be productive and creative during lockdown. Whilst some people have thrived and found lockdown a very helpful time to be at home and create, many others have felt the anxiety that lockdown has brought with it. We asked Jaydonclover if these months of lockdown have been helpful with creating or whether she too has felt the anxiety of being a creative in a pandemic with a continuing online pressure.

‘Kind of half and half. It’s really difficult to be consistent with anything during lockdown. So at the start I was like ‘Right I’m gonna write loads, I’m gonna record loads’, I bought a mic and everything. And then it kind of started to lessen everyday. And then there was a month where it was just like nothing I did nothing at all, didn’t write, didn’t record. There are people that are applying pressure, especially on the internet, but I think it’s down to the individual to think ‘I’m not going to let that affect me’. I don’t think I let it affect me because I worked so hard on my EP, I needed to rest and have some time out and not think about music for a bit. But now I’m back and now all the hard work can start again.’ 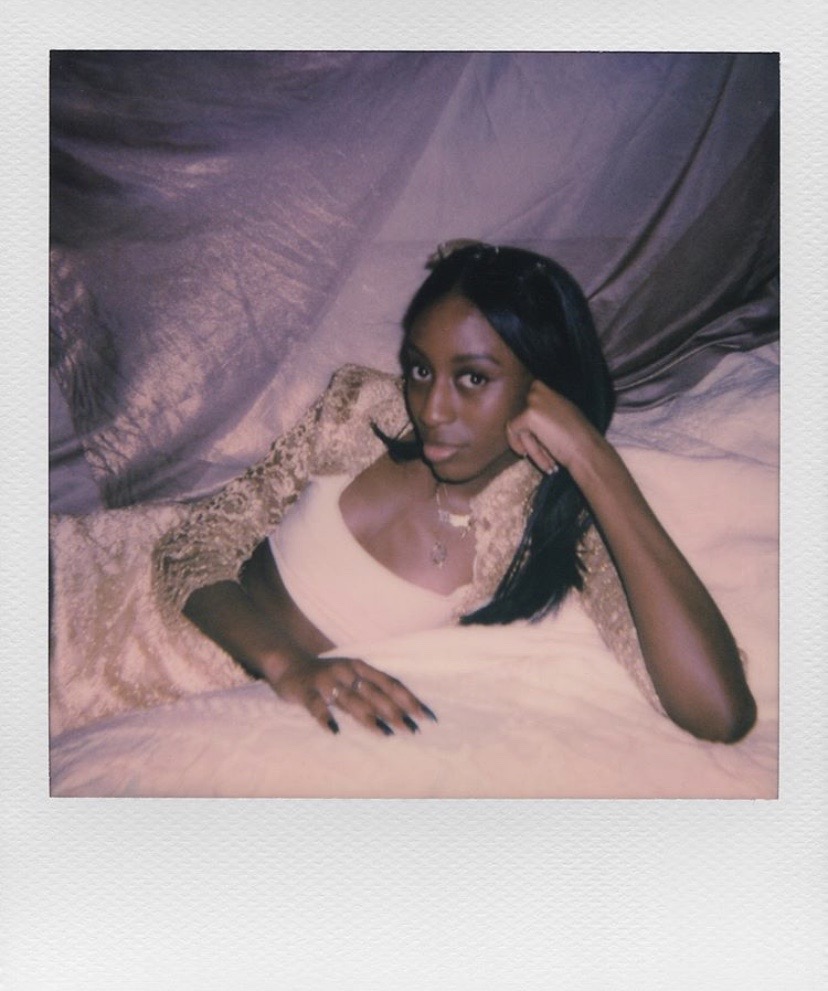 While we have been missing out on seeing some of our favourite artists at gigs and festivals this year, lockdown has given people a lot of time to explore different genres and find more artists that we enjoy. Jaydonclover gave us a list of a few that she is really enjoying at the moment.

‘KayFaraway, he is a singer/rapper, kind of like me, a singer/talker from Birmingham. He’s got an EP out at the end of this month. I heard his stuff earlier this year and I was just absolutely blown away. I’ve never heard a guy from Birmingham do what he does. Love love love love. Monét, she is based in south-east London. I was listening to her over the weekend, her project and it’s absolutely amazing. Her latest single ‘Apple Bottom Jeans’ is sexy, groovy, it’s a vibe. And then the 237 Mob guys are paving the way in London, I love that I love what they’re doing. Rada, she’s absolutely amazing and she was the reason why I did my last show. Her vibe is similar to mine so we work pretty well. There are quite a few different artists that I do love, especially Franklin Armstrong from Birmingham and Afro Queen.’

While the London music scene is constantly growing and shifting, music scenes in other cities are also doing the same. New artists are popping up all over the country, and different cities are starting to get more recognition from music fans who are starting to search different places in order to hear different music. Jaydonclover explained that artists have always been emerging in Birmingham, even if people don’t always realise.

‘I think with Birmingham, people don’t realise that there’s always been stuff going on here. People just never take the time to look outside of London, or outside of whatever city they’re from. We’ve always been here, we’ve always been doing this. For example Franklin Armstrong, he’s been doing music longer than me. He’s here, he’s been here and been established in Birmingham and that sound, that low-fi, raw sound. There are a lot of artists obviously everywhere, but in Birmingham they do sort of pop up everywhere. It’s nice to see, really really good to see.’

And finally we asked Jaydonclover where she sees herself and her music in a few years time. However like many people’s plans right now, hers is still changing and developing, but she did have one specific goal.

‘I never look that far into the future. I literally look at it like the next few hours. But I just hope succeeding, successful, and have a really good name for myself, my music and Birmingham. Just succeeding.’