The apple of tastemakers eyes, London’s Asha Gold is making her mark on the UK music industry with her silky smooth melodies and catchy contemporary beats. Named as one of BBC Asian Network’s Future Sounds 2021, Asha has been utilising her classical music background while championing her newer knowledge of the industry to produce her instantly recognisable tracks. We caught up with the rising star to discuss her latest single ‘Exes‘, and how she has, and continues to navigate the predominately white, male industry as a woman of colour.

While Asha’s music today combines a number of different sounds and sub-genres, her earliest musical memories lie in a different genre. From a young age Asha was surrounded by classical music and was encouraged to learn a number of instruments and delve further into it’s many avenues. She went on to explain to us a bit about her musical background and how it has impacted her as a musician today. 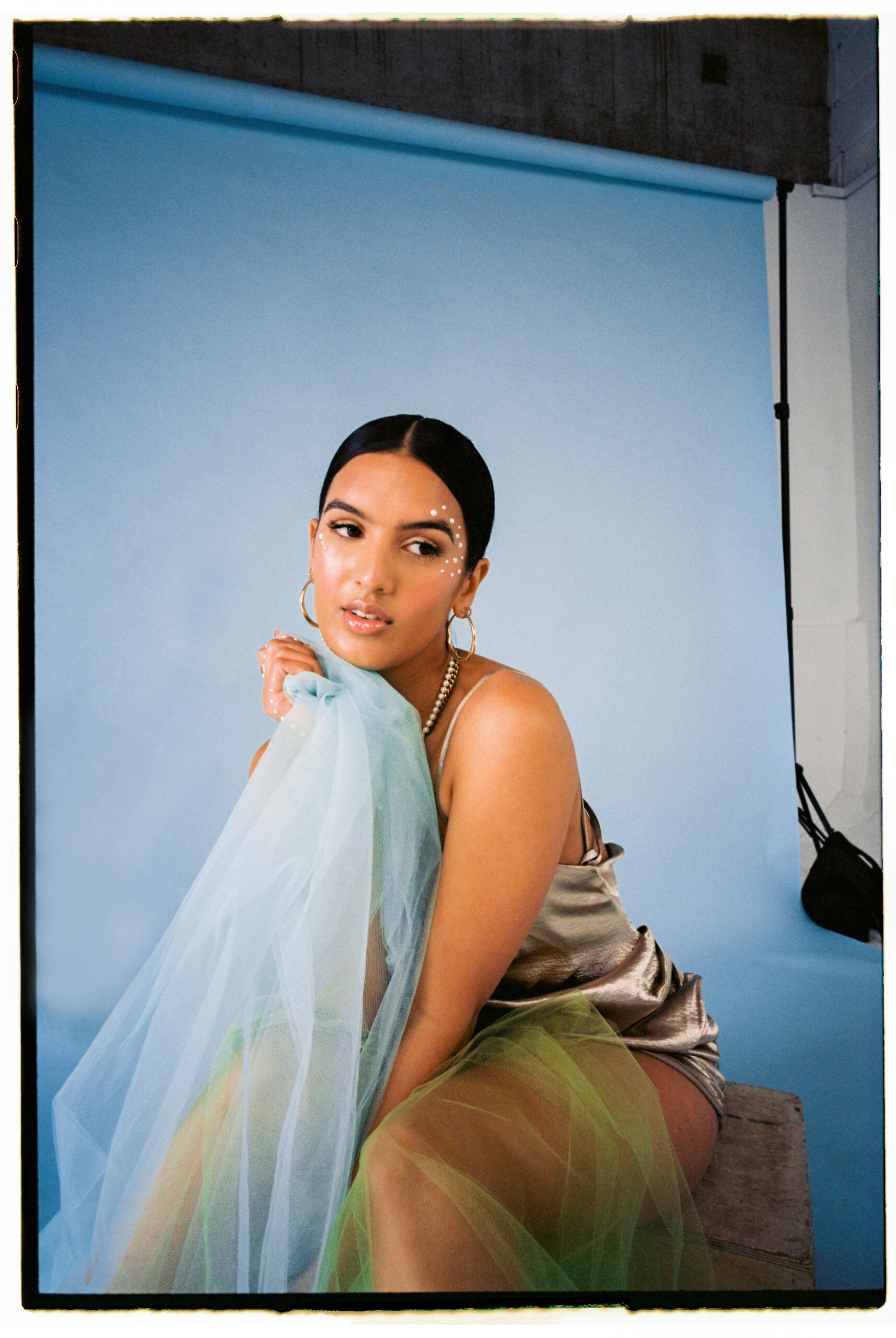 ‘I started to learn piano at a really young age. That was my first experience of learning a skill and technique, and I later started signing and drums. And then I used to perform in groups and orchestras. That’s where I found my love of performing, at the end of a concert or a show that kind of post-performance high. It was only after I left school that I turned to writing and storytelling. I’m grateful for the classical background because it gave me the chance to understand the music, not just the lyrics but also the music behind a song. And discipline which is definitely important as an artist.‘

While many female artists like Asha have grown up surrounded by music, many womxn are made to feel out of place behind the musical scenes. In a predominantly white, male industry, womxn (and specifically womxn marginalised by gender or race) find it hard to solidify their space within the scene. We asked Asha if she has found many obstacles within this space and how she has overcome them.

‘Definitely, especially as a female artist when you are often in a room with male producers, or generally male dominated environments. What I love about having an orchestral background is that I feel like I can speak with more authority and a bit more confidence in those situations. Because I know what’s going on and I can back myself. I can understand a lot of the technical jargon. I’d love to continue honing those skills and learning something like guitar. I think the more self-sufficient you are as a female creative, the better.

People obviously look at me and know I’m an Anglo-Indian artist and that’s an important part of my artist project. But people sometimes try to project a certain type of marketable view – as in ‘play this up’, ‘do this’, ‘use it to play up your USP’. I’ve been asked so many times ‘what’s your USP?’, and I’m just not sure that white artists get asked the same question. There are a lot of white artists that are brilliant but occupy similar spaces, have similar sounds and collab with the same people. So that question raised a lot of doubt in me. But I realised that’s such a narrow question because in my eyes there’s lots of things that make every artist unique.

Now it’s more just increasing representation. I think things can be quite black and white without necessarily honing in on what is across that whole spectrum. It’s just important for me to exist in this space and be authentic to myself and to my relationship with my Indian heritage.’

While Asha’s music has obvious hints of R&B, her tracks are instantly recognisable as her own because of her mixes of different genres and sounds. So to confine Asha’s sound to just one genre or label would cut out so much of the work she has put in to create such unique work. So we asked her to sum up what her music means to her.

‘I would describe it as colourful. I’m very influenced by R&B and a lot of that genre can be quite indulgent. I’m not ashamed to bring in those pop influences and really mash all those kind of sounds. I love whacky percussion, I don’t want to resort to a snare you’ve heard a million times. So I think choosing left-field, slightly unique sounds, but then maybe a more familiar pop melody is really important in creating my sound.’

Asha’s newest track ‘Exes‘ creates a relatable and accessible space for listeners, while also giving it an upbeat, tongue in cheek impression. And while the song itself has become a staple track for many people, Asha explained to us that there is a very personal story behind the lyrics which she wanted to share with others.

‘It’s quite a funny song because I wrote it from a place of being in a relationship and struggling to really get attached to that person. And having a bit of a panic that they have loved other people. I had never had another partner so I thought it was unfair that they had something to compare it to. Even though these other people were so far out of the picture, it was me feeling insecure about things that I really didn’t need to feel insecure about. It was quite tongue in cheek and was my first session with a producer called Monroe. I was quite nervous to come out with this concept, and I think the production reflects the light-hearted feel of the song. It wasn’t a diss at anybody, it was just how I was feeling.’

And this is just the beginning for Asha and her music. We ended the interview by having a think about what exactly the future holds for Asha, what we can look forward to seeing and the direction in which she sees her music going.

‘I want to keep pushing my songwriting and pushing my sound. I think you’ll see a couple more EP’s where I’m just enjoying that process of experimenting. And then after that… I don’t want to say sophisticated, that’s kind of degrading of the EP’s I’m going to put out, but I think an album where I’ve really solidified my sound and there will be a cohesive strand going through it in terms of story and narrative, maybe percussion and the music. I think there will be an evolution, but for now, I’m not ready to stop trying things and experimenting with different sounds. And I feel like that can only improve my music.’

Head over to Asha Gold’s Spotify page to hear her latest single ‘Exes‘ and more of her contemporary tracks.