Glastonbury 2022 – Haste’s review of the return of the festival

2 years. 2 YEARS! That’s how long many of us have been waiting to return to the fields of Worthy Farm. This year, Glastonbury festival’s 50th anniversary, Haste was lucky enough to attend for the first time. And in short, we spent 5 days in complete awe at the sheer size of the festival, the planning that went into it and the outstanding quality of sound and visuals throughout the numerous fields and areas.

Arriving bright and early on Wednesday morning, we were able to join the queue, which was already ridiculously long for 2am. With the excitement mounting, even for campers getting some shut eye before the long walk up to campsites, it was clear that people have been dying to get back to these fields. While Wednesday didn’t hold much in terms of acts or music, it gave people a chance to get reacquainted with the grounds layout, and put their tent up at their own pace in the blazing heat. It’s safe to say that this was one of the best years for the festivals weather. 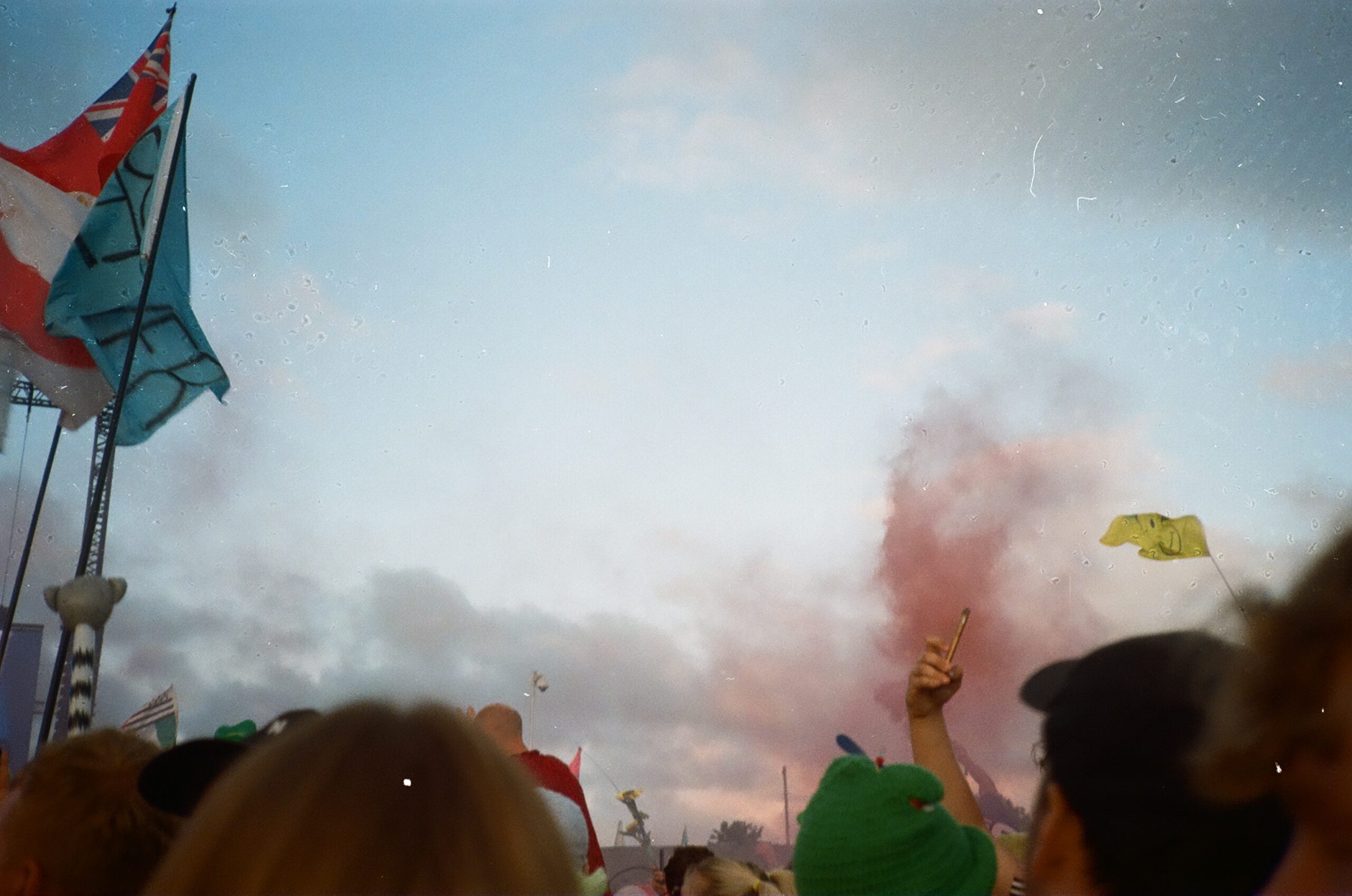 With this being Haste’s first Glastonbury, there were many things we were somewhat naive to. And while we knew that we were attending the world’s biggest music festival, we were still shocked by the volume of people around us. Pushed on by the adrenaline of merely being there, we made it through uncountable crowds and bottle-necked walk ways (even when it became almost frustratingly impossible). Along with what seemed like half of the festival, we headed to the top of the hillside on the Wednesday night to watch the sunset, which was eagerly cheered on by its viewers. And the festival begins.

Thursday sees the opening of smaller stages around the site, including a highly popular addition Lonely Hearts Club, and the renowned Rabbit Hole. Emerging artist and former Haste interviewee SOFY attracted a bustling crowd of sweaty bodies to her early afternoon set in the The Rabbit Hole. Her upbeat sound and sing-a-long tactics got the crowd hyped for the day(s) to come. Walking through the Healing fields and craft tents brought serenity to a crowd of people looking to fill their time before the nights to come. Many continued to wander through the multi-faceted areas, reaching the edges of Block 9 and Cineramagedon before heading back towards the evenings growing music scene. We headed back over to Lonely Hearts Club to catch partners and duo Piri & Tommy and later headed over to The Rabbit Hole to catch a very hyped first (of three) sets by Bad Boy Chiller Crew. Much like the nights to come, we then headed down to South East Corner to experience the tents and acts that kept going until the early morning.

Friday rolled around quicker than expected, as did the larger stage sets. Needless to say one of the earliest sets at The Other Stage, The Libertines, attracted a crowd so big that it spilt out into other areas and camp sites. While all the stages amazed onlookers, something about The Other Stage took centre fold. Not only was its line-up for the weekend refined and largely diverse, its size was something to behold. Floating through crowds toward the main stages, we caught sets by Ziggy Marley at the Pyramid Stage, followed later by unrivalled alternative rock band Wolf Alice who kept the crowd going even through the first signs of rain. Wet Leg took over the Park Stage with a unfathomably ginormous crowd, all bopping away to ‘Chaise Longe’ and a selection of their newer tracks. As the skies mellowed towards the evening we headed over to West Holts stage to enjoy the electronic sounds of Bonobo before the South-London powerhouse that is Little Simz. As the crowds gathered after the stages musical interlude, excitement rose. Commanding the stage from the second she walked on, Little Simz, aka Simbi seemed entirely at home on this stage, and at the world’s biggest festival in general. Throughout the set she brought us onto a journey, one that we took through both her life and her latest album release ‘Sometimes I Might Be Introvert’. Walking through the jungle, we were both amazed and overwhelmed by the storytelling abilities of this great artist. She left the stage saying that she’ll see us next year from the Pyramid Stage, and we are counting on it.

Looking around camps in the blaring Saturday morning sun, many sore heads can be visualised through partly glittered faces and sunburnt t-shirt lines. The pace definitely seemed much slower throughout the morning, but did not fail to pick up again as people headed towards the Pyramid Stage to catch South-London songstress Joy Crookes and consistently growing group Easy Life’s sets. After performing at the BBC Introducing Stage at the last Glastonbury back in 2019, its clear how far the 5 guys from Leicester that make up Easy Life have come. Continuing to develop both their music and their style, it wasn’t hard to tell that the guys were having the time of their lives up there. Proved even more so by lead singer Murray’s stage dive into the crowd. As the evening closed in, everyone and their mum (literally) headed over to The Other Stage for American pop star Olivia Rodrigo’s set. 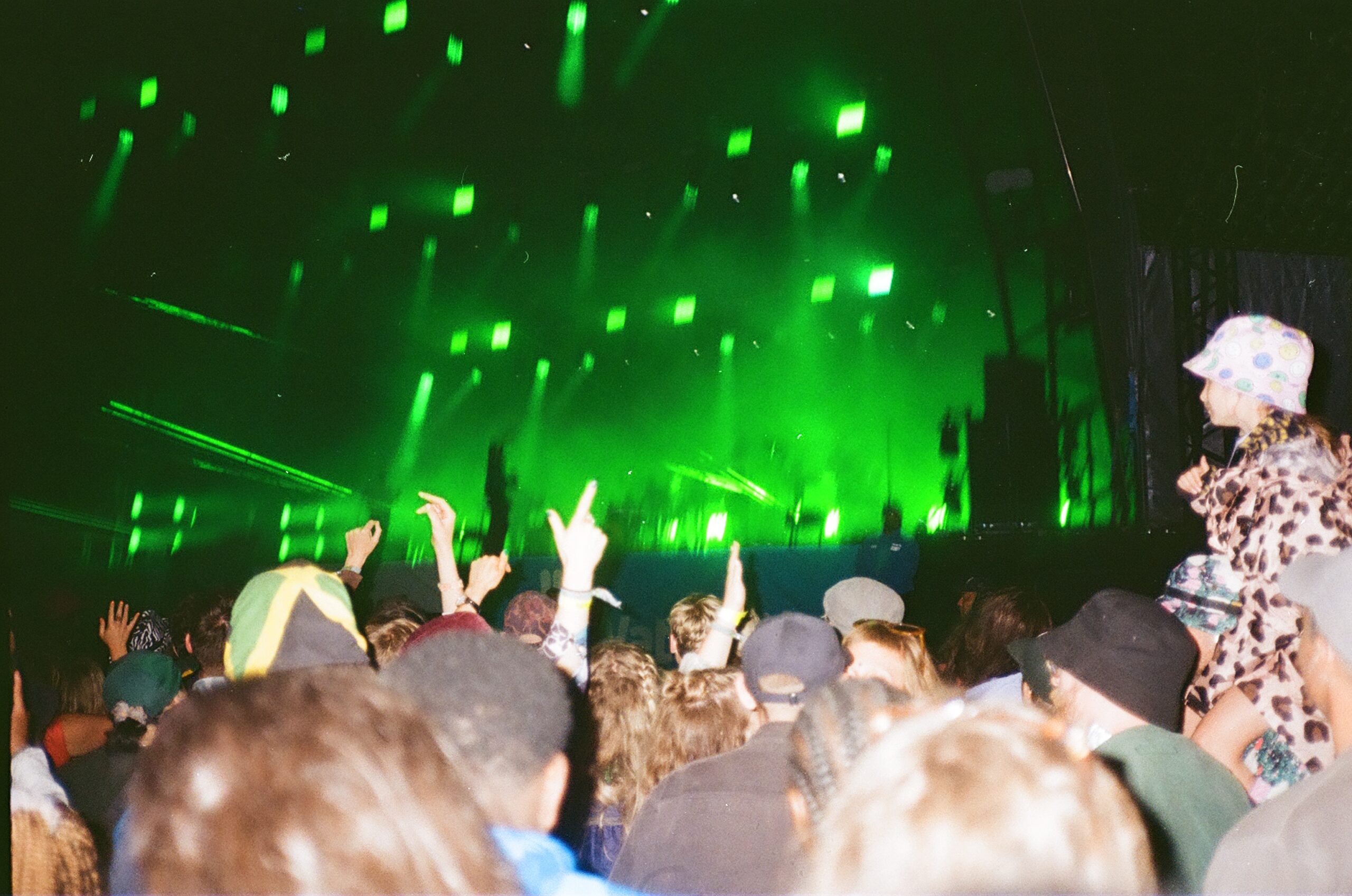 With an amazing stage presence and about half the festivals residents screaming the lyrics to each song, it wasn’t hard to tell that Olivia’s set would go down in history. Even more so when she brought out the legend that is Lily Allen. After speaking out on the despicable abortion laws being passed in the US, Olivia invited Lily to join her on stage to sing her iconic track ‘Fuck You’ – dedicating it to the white, male senators that brought in the law. This moment will definitely go down in Glastonbury’s history books. And then for the nights headliners. With a clash of Paul McCartney, Megan The Stallion, Jamie T and Róisín Murphy, the question all day leading up to the evening was, ‘who are you going to see?’. But when it came down to it, we couldn’t miss the return of the legendary Jamie T. Sauntering on to the stage wearing gazelles, guitar in hand, hat on, the crowd went wild. In true Jamie T style, the legendary British artist held nothing back at his set on the John Peel stage. Jumping from new tunes to iconic tracks like ‘Salvador’, ‘Sticks and Stones’ and of course his number one track ‘Sheila’, Jamie took his audience on a journey from the new back to the classics in an unforgettable set. Exclaiming that he ‘doesn’t give a fuck anymore’, and losing his shirt and hat in the process, it seems that Jamie T’s character cannot be restrained.

After the crowds flooded out and people ran back to their camps to grab more warm tinnies and mixers, many headed down to Block 9 to experience a night like no other. The (needless to say iconic) IICON stage housed some dance and electronic legends throughout the Saturday night until the bright sunny Sunday morning. Starting off with Floating Points before leading into Shygirl and Joy Orbison’s sets, the crowd were in a trance throughout hours leading towards the festivals final day. And it wasn’t long before the sun had risen and the festival went quiet(ish).

Then came Sunday morning. The mood across the festival was somber, but the party-goers still persevered. With a more than hyped up set over at The Other Stage at 11am, Kojey Radical got the morning wakers going with his happy-go-lucky set. Along with the friends and family watching at the stage side who were dancing, singing and generally having what looked like the best time, Kojey opened the day along with the sunshine. Later at the same stage Lianne La Havas brought in a calm but upbeat sound. The crowd continuing to grow, her return to Glastonbury was exactly what we needed for a swaying Sunday afternoon. Then the crowds started arriving at The Pyramid Stage for the legend that is Diana Ross. As the screens flashed pictures of her immense musical past she arrived on stage in a show stopping purple feather-covered outfit and sang classic after classic – from ‘Upside Down’ to ‘Ain’t No Mountain High Enough’. 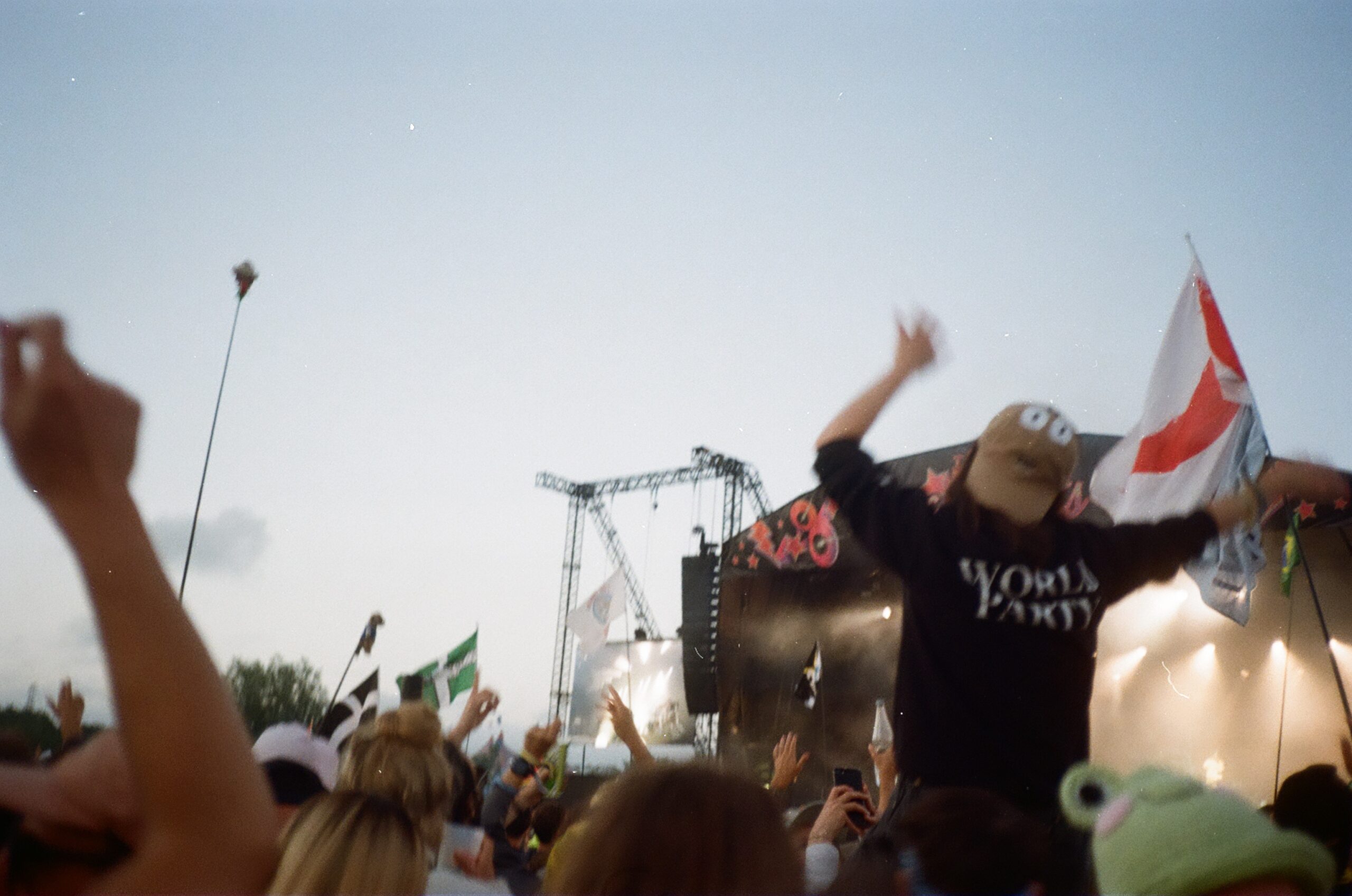 With the sun beating down on a field crammed full of festival goers, the feeling was collectively euphoric. We then took a trip over to BBC Introducing to see flourishing artist Nilüfer Yanya take the stage. Her calming vocals and seamless guitar solos solidified her growing space in the UK music industry. Then as crowds descended on The Pyramid Stage the sun began to set and Lorde brought a sense of both calm and party. As the her set built she brought on guests Clairo and Arlo Parks to serenade the transfixed crowd, before she brought her set to an end with an elated rendition of er smash hit ‘Solar Power’. Lorde’s incredible set was shortly followed by the last headliner of the weekend – Kendrick Lamar. The level of detail showcased in the rappers set was astounding. A combination choreography and musical interlude introduced Kendrick to the stage and his set was electric. Dressed in white with a Tiffany diamond encrusted crown of thorns, he reeled off a number of classic and newer tracks to which the audience replied with virtually every lyric. The theatrical feel of the set brought a new dimension to the day and as he went to through tracks like ‘HUMBLE’ and ‘Bitch Don’t Kill My Vibe’, the energy built. His final song brought him to a chant of ‘Godspeed for women’s rights’ also in retaliation to the roe v ward overturning in America. As blood fell over his face from his crown, his message was magnified and left the crowd feeling connected and angered at the current situation overseas.

Glastonbury will forever be the world’s most iconic festival, but this year felt different for many people. Not only were people elated by its eventual return following such a hard and uncertain time, but seeing so many artists making political statements brought a sense of needed reality to a place that is otherwise otherworldly. Incredible weather and equally outstanding performances across the farm made for an incredible 50th anniversary for Glastonbury. And we can’t wait to see what next year has in store.